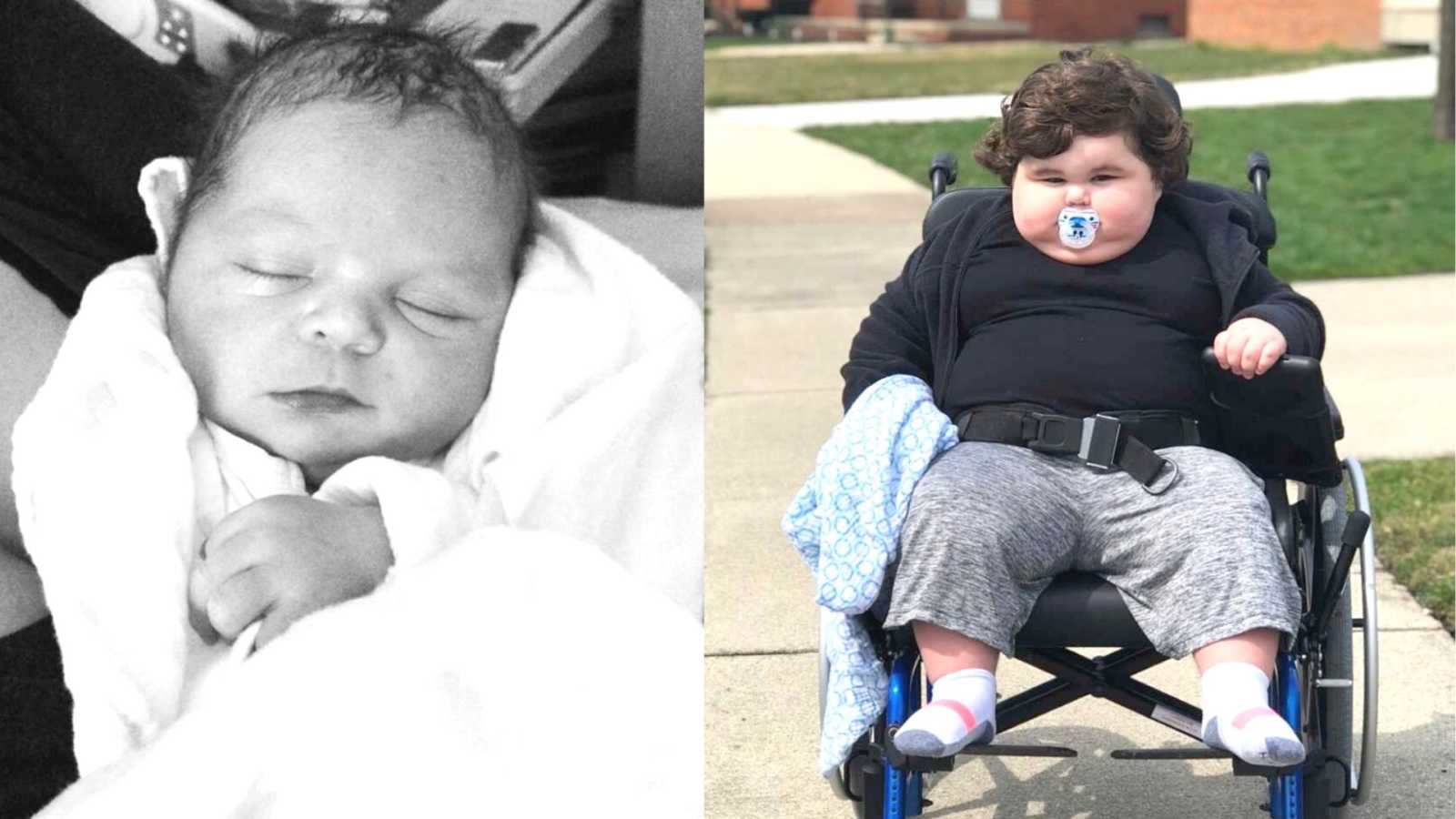 “Years ago, I remember telling an old family friend, who was a caregiver of young adults with autism, ‘Thank God for people like you. I could never do what you do. I wasn’t given the gifts of patience and compassion you have.’ I’ve never thought of myself as a very selfless person and still don’t. How little I knew about the journey life had in store for me and my family.

Joshua was born a normal weight of 8 pounds and 2 ounces. He then began growing rapidly immediately after birth. He grew almost 3 inches and 8 pounds in 7 to 8 weeks. My husband, Chris, and I started feeling that there was something concerning going on very quickly. Josh never wanted to be set down, liked constant movement, and was always fussy.

When we brought our concerns to our pediatrician’s attention, we were told he was simply a fussy baby or had colic, and would surely grow out of it. Switching to a hypoallergenic formula helped with his acid reflux but not with his overall fussiness or growth patterns. Having two older boys, we knew what colic looked like. We knew this was something more. However, we often second-guessed ourselves, being sleep-deprived. Everyone in our lives had opinions about what was going on, and the uncertainty caused hardship between us and with our extended family.

When Josh was ten months old, he was more than thirty inches long and weighed over thirty-five pounds. I began keeping detailed food logs–yup, for a ten to twelve-month-old! I took those logs with me to appointments and I’d ask the doctors, ‘does this intake justify the weight gain we are seeing?’ They made it clear, they didn’t believe food alone could cause the rapid growth we were seeing, especially with the calories he was eating per day.

I don’t remember the exact moment we were told Joshua’s condition is ‘without a doubt, Rare Genetic Obesity Disorder’ but it undoubtedly changed our lives forever. This is how he was made. It’s hard-wired into his genes and nothing we did caused it. Some of Josh’s symptoms include abnormal growth or weight gain, autism spectrum disorder, developmental delays, limited mobility or low muscle tone, abnormal lipid levels, liver fibrosis, and sleep apnea, among others.

There is often a lot of misunderstanding surrounding obesity. People often assume if someone is overweight, they must eat too much or not get exercise. As more studies are being done all around the world, researchers have found it’s simply not true. There are many diagnosable genetic variants that affect the way someone’s body processes food and the way their brain responds to hunger (called MC4R Pathway). Many individuals with these disorders feel as if they are literally starving. In Josh’s case, we believe we have found a gene variant that is connected to one of these disorders. Although the medical community is making leaping advances in this field, it isn’t quite known just yet. Getting a formal diagnosis can take many years, even a lifetime for some families, and others never receive one. Our hope is, with education, advocacy, and connections to more specialists and families around the world, we can find answers and solutions for Josh’s future.

Looking back, I believe that Josh’s fussiness in the early months of life was due to a combination of discomfort from his body growing so quickly and the overwhelming stimulation of the world around him. When he was diagnosed with autism at 18 to 24 months, I enrolled him in early intervention right away. He now attends a private therapy center five days a week for occupational therapy, physical therapy, speech, and ABA. It has been a game-changer! We have an incredible therapy team. I rely on them to help with things from tackling typical behaviors to how to potty train a child with unique needs. I homeschool him in the afternoons.

My brother called me about a year ago after a family event. I could hear his tears on the other end as he said how happy he was to watch Josh play, smile, and laugh. He admitted he feared he’d never see Josh that interactive. A physical therapist told us he may never walk and we should get him a wheelchair. Josh has been blessed with a wheelchair he needs for shopping or long distances–but he does walk! In fact, some days it feels like he never sits still. He is a typical four-year-old, getting into everything and keeping us on our toes. Some things are physically challenging, like going to Disney or even simple trips to the store. And some things are impossible, like going to the beach. We look back at how far he has come and remember to never set limitations for him because he surprises us regularly with what he can accomplish.

It’s hard to tell our story sometimes because the harsh reality is, people can be unkind. There has been no greater challenge in our lives than watching our child struggle and fearing for his future. I believe we have a responsibility to tell our story. Through sharing our story online and on social media, we now have connected with families all over the world, have found community, and no longer feel alone. However, the world is still full of judgment and misunderstanding.

We were blessed with a trip to Disney last year. On the second day, Chris was noticeably feeling down. After deciding to return to the hotel, rest for a bit, and go swimming returning, he confessed what was bothering him. People were staring. Everywhere we went, people stared. Because Chris works most days and the people we see on a normal basis know us, he wasn’t used to it. It was hard for me to see how it hurt my husband’s heart. All of the feelings about your child’s condition hits you in those moments. These out-of-the-ordinary moments force you to process your feelings and actively go through grief steps. Most days I’m somewhat immune to it. And Josh is completely unaware.

I enjoy when Josh and I see another child in a store. To Josh, they are interested in him and want to be his friend. To me and their parents, the child is staring and making the moment awkward. I encourage Josh to wave and say hello, which often breaks the barrier of the child’s confusion of Josh’s size and wheelchair. I feel it also helps the parent feel more comfortable about a situation they don’t always know how to handle. Josh just wants to be everyone’s friend. I’d like to encourage parents to tell their children to wave and say ‘hello’ to everyone, even those that seem a little different.

Sometimes, we worry our other two kids are not getting the same life experiences they would if they did not have Josh as their brother. I think it’s human nature to ask the ‘why us’ questions or play the ‘it’s not fair’ game. But an epiphany hit me a couple of years ago. What if there is a reason? Don’t lose me here. I know how complex, challenging, and tough that thought is for a lot of people (me and my husband, included). And sometimes, this is all just too hard to think about, but the epiphany was this: what if Joshua’s journey was given intentionally to my older two boys to shape them into the men they are meant to become? I must believe in that truth.

Although we fear constantly about the future, we choose to live one day at a time (which at times, takes active effort). Joshua has made us all more loving, patient, and understanding people. He’s shaping us into better versions of ourselves. That has been worth giving up trips to the beach.

So you see, we never know what life has in store for us. I once didn’t think I could do what my friend does for a living, but now I live it. And seeing a glimpse of the world through Joshua’s eyes, I can’t imagine doing anything else. Because as challenging as this journey is at times, we know this is where we are called to be. This is the job we were called to do.”

This story was submitted to Love What Matters by Molly D’Angelo from St. Clair Shores, Michigan. You can follow their journey on Instagram and Facebook. Do you have a similar experience? We’d like to hear your important journey. Submit your own story here. Be sure to subscribe to our free email newsletter for our best stories, and YouTube for our best videos.

“I was standing in line with my cart. I only had $40 left to my name for 2 weeks and was about to spend $37 of it on this little bit of food. I tell my son, unfortunately, today I can’t afford it. He was upset. I went to pay for our things and the cashier handed me a card. I start bawling my eyes.” 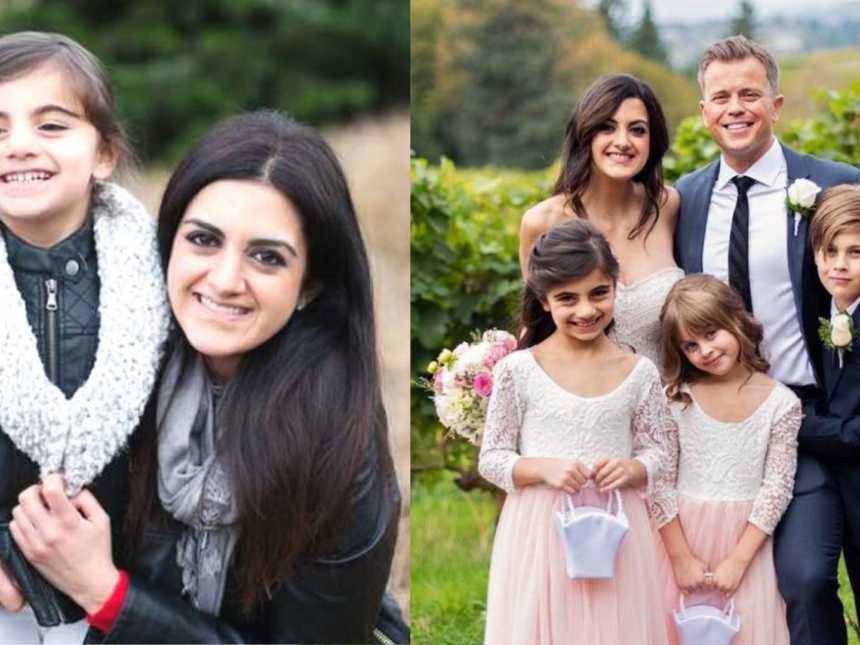 “I needed to take a step back. I had been trying so hard to help my stepchildren go through the healing process, I jumped into the mom role way too quickly. It wasn’t my job to fill the void.”