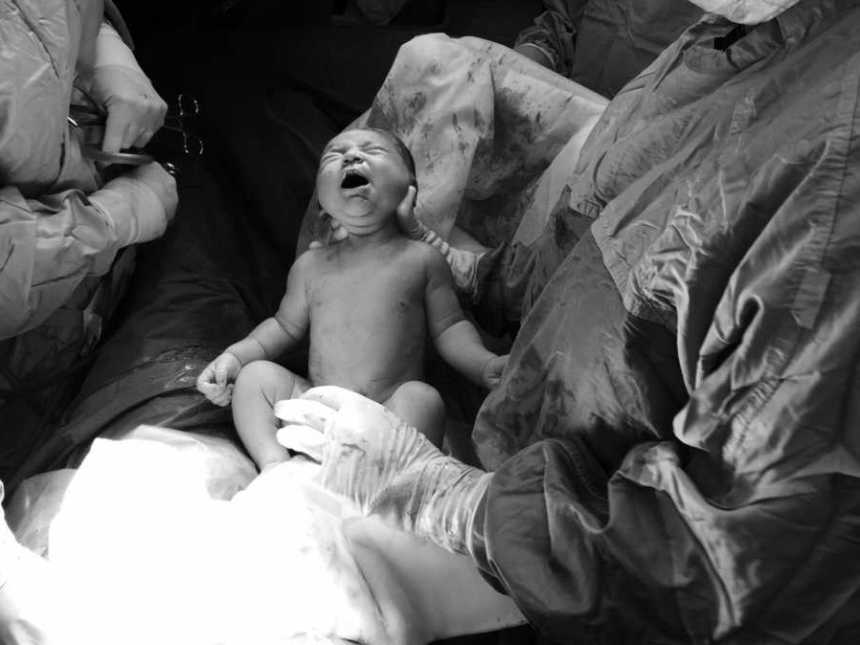 “This is my daughter’s very first photograph – bloody, furious, and taken just seconds after she was delivered via an emergency C-section. Destiny conspired against me – deciding my sixteen hour labor, along with 45 minutes of eye-popping pushing (which resulted only in the birth of the previous night’s sausage casserole) would not end in the natural delivery I had so desperately hoped for (shakes angry fist at birthing plan).

A friend of mine, yet to embark on parenthood, recently joked that when she gave birth she would be opting for the ‘easy way’ out – choosing a cesarean over natural. This got me thinking… well first I laughed a sort of psychotic serial killer-esque laugh – but then I started contemplating….

Is it really the easy way out…?

Now I don’t blame her for this mentality in the slightest (even though I replied with a middle finger emoji) – it’s just one of those misconceptions people have before they find themselves in a certain situation.

There seems to be an odd assumption that having a C-section is some sort of magical and pain-free alternative to natural childbirth. Granted, if it’s planned you can eliminate contraction pains and a lot of the vomit / poo indignity that goes with a natural labor – but you still have to undergo major surgery… AWAKE (in most cases). Yes, there’s a big blue sheet – but what the heck is happening on the other side of it?! Two people rummaging in your trunk as though they’ve lost their phone down the back of a sofa cushion, is unpleasant at best. And once it’s over, and you’ve gone through the horror of not being able to feel your legs for a couple of hours – what then? Well, regardless of it being planned or emergency – everyone is still very much in the same painful, catheter, and bloodied surgical stocking filled boat. Yes, there may be some who are ‘too posh to push’ – but no one is too posh for a suppository in the bum once that anaesthetic wears off. FACT.

Post-delivery packs its own share of problems too… breastfeeding, changing nappies, and picking up a crying child is tricky when you can hardly move your own body. I personally struggled having a conversation with my father-in-law as my wee trickled into a bag next to his foot – awkward to say the least.

A section is also one of the few major operations you’ll have where less than 24 hours after going under the knife, you’re hurled out of bed and sent for a walk and a shower. You’ve got a child to look after woman, no time for laying around and feeling sorry for yourself. Brutal.

Along with physical damage (can we all say ‘C-Section shelf’) – there’s also mental trauma, as with any form of birth. The photograph with this post is now one of my favorites, but it didn’t used to be… It used to be a memento of my failings… a reminder that I hadn’t done things ‘properly.’

Yeah I went there… ‘Properly’? Blooming ridiculous, I know. At the time, there was a rational part of my brain saying, ‘It doesn’t matter how she arrived, she’s alive.’ However, there was also a louder non-rational part that harbored feelings of guilt and inferiority. Although my husband and I now joke and high-five about being ‘honeymoon fresh’ – at the time I definitely felt less of a mom because I didn’t push her out of my faff, or experience the ‘burning ring of fire’ (apologies to anyone who now has Johnny Cash stuck in their head).

Reflectively – if nature had done as it intended my children and I wouldn’t be here, so what’s the point in feeling guilty about that? I should feel lucky, and now I finally do.

Hate to be the bearer of bad news folks, but I’ve come to the conclusion there’s no easy way to birth… What goes up must come down, albeit nine months later and slightly heavier – there’s just no getting away from pain, scars, complications, and hefty dose of indignity… But if everyone comes out of it healthy, happy and alive – who really cares?”

This story was submitted to Love What Matters by Sophie, 33, of Tired ‘N Tested in Cheshire, North West England. Submit your story here, and subscribe to our best love stories here.