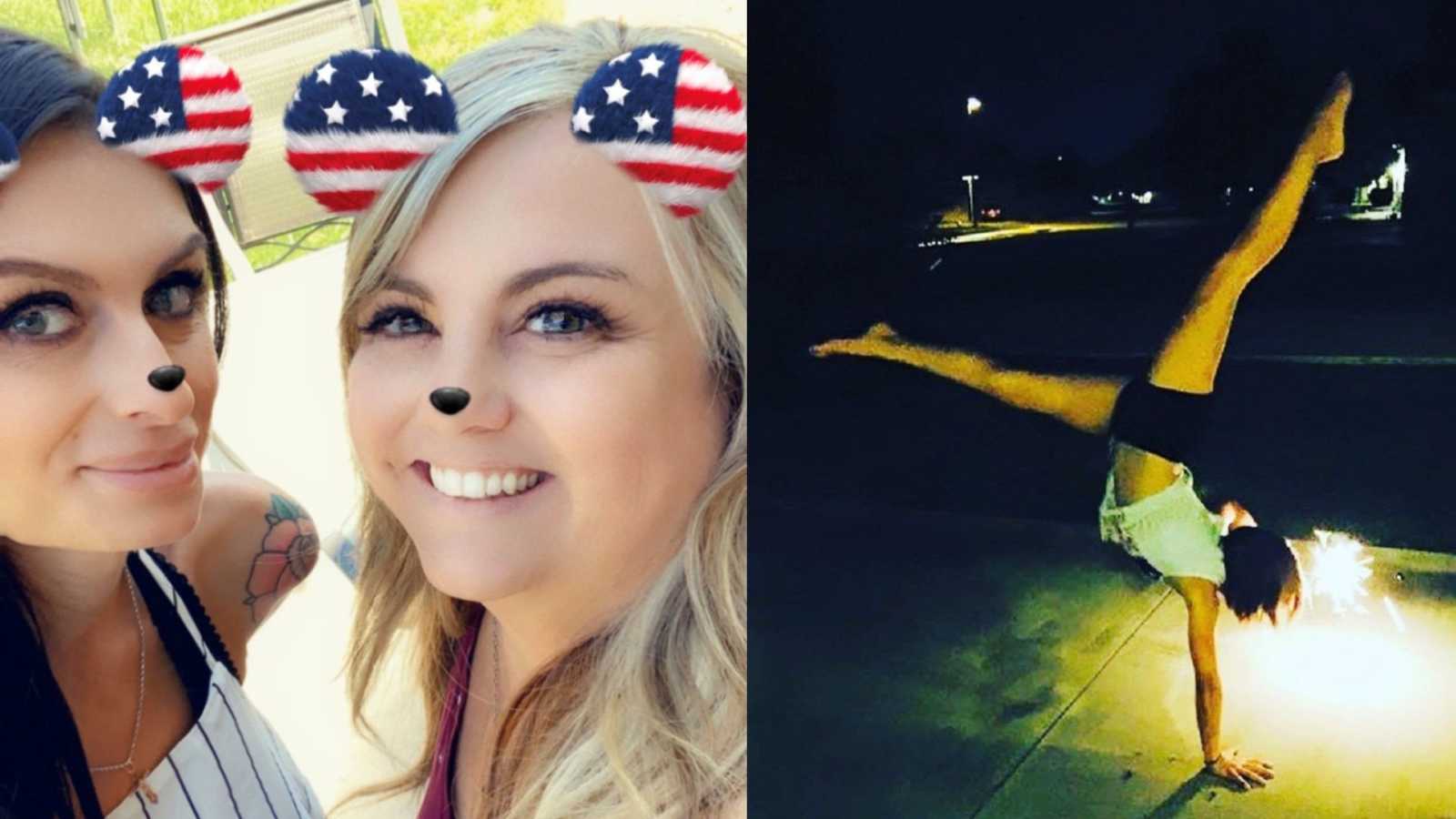 “So, I had a great 4th of July. Except for the part where I almost died, but I’ll get back to that later. It was, however, the closest I’ve come to death on a holiday besides that time my husband, Chad, decided to make his own fireworks display for the neighborhood. I’m not kidding. That man somehow figured out how to line up fireworks on a board and shoot them off using a remote control he programmed while sitting in his camping chair in the driveway. Well, there was also that one time he painted the house and took off all the socket cover things from all over the house. Instinctively, I knew I wasn’t supposed to touch them, but the curious 3-year-old inside of me couldn’t help it. The initial shock wasn’t that bad, but it scared me enough to lay on the bathroom floor and scream out, ‘I’ve been electrocuted! I’ve been electrocuted!’, to which he came running, shaking his head. Trust me, it’s not anything like when you stick a battery on your tongue. Just don’t do it. Just don’t.

I think the only other time I thought I was going to really kick the bucket was that time I had surgery and was so sick afterwards, I couldn’t help but throw up on the way home in one of those throw up things the hospital gives you. You know, they look like a big tube, they’re kinda long and open on the top? Yeah, I filled that up. Right to the brim. And my sweet husband did the only thing he could do in that moment while he was driving down the freeway. He held it. Yes. One hand on the steering wheel and one holding the contents of my stomach. You never have to ask me what true love is. Because, that’s it, in a nutshell.

So, this past 4th of July, while I was hanging out with friends celebrating our Nation’s birth, somebody gave me a serving of macaroni salad. I didn’t realize that Hawaiian macaroni salad might be different than anything I had ever had; that was, until I scooped a bite into my mouth and was sure I tasted fish. Not just fish, but crab. I was convinced of it, even though I have never eaten crab before. Why, you might ask? Because my family has a history of shellfish allergies, so I’ve always stayed away from it. I haven’t thought about it in years, until I swallowed and realized what I had done.

My ear immediately started to burn. My lips tingled. My thoughts consumed me. My brain went into overdrive. The voice inside of my head started panicking and screaming into my itchy ear, ‘That’s it, you’re gonna die.’ I had to act quickly before my throat closed and my hands seized. I patted the couch around my until I found my phone, opened my Facebook and messaged an ex-boyfriend who is a paramedic. I asked him if I should rush to the ER. He told me to try some Benadryl first. He knows me well enough to know that not only I am the kind of girl who would electrocute herself, bit I’m a bit if a drama mama, so after talking to me for 20 minutes, he assured me I was likely going to live if I was still breathing at that point. I’m sure he was shaking his head behind his computer screen, just like Chad once did, but I thanked him and immediately got some ice cream, because I decided something frozen would help. Don’t ask me why. Ice cream fixes everything, I guess.

Anyway, after I stopped planning my own funeral, I stepped into the restroom to check the mirror for hives. I checked my face, then my neck, then across my chest. I settled my breathing and tried to calm down. I looked around the room and reminded myself I would be ok. When I was ready, I turned and wrapped my hand around the door handle to leave. I only saw it for a second, yet it took my breath away, and then I could not help but stare at it until my eyes were burning. Seeing a simple socket cover on the wall was all it took to fill my eyes was tears – tears so heavy that they fell without me even blinking. At first, I blamed fear. Then I blamed an adrenaline dump. Then I blamed my doctor for adjusting my hormones and lowering my estrogen patch. Then I blamed the holiday. But as I wiped the tears from my wet face, it hit me. I knew exactly what it was.

It wasn’t any of those things. It wasn’t hormones or the holidays or fear. It was something the ex-boyfriend said while he was saving my life over instant message. After he determined I was going to live, we checked in with each other about how things were going in our daily lives. He told me work was great. His family was solid. I told him the same, but he has known me long enough to know that it probably wasn’t. We chatted some more, and then it happened. He told me that he was ‘sorry I had gotten such a raw deal in losing my husband.’ He said he was sorry that my husband had died, and tried to empathize with how I must feel not to have him here anymore. And it dawned on me in that moment, three years after he passed away, that all those times when I was scared or confused or knocking on death’s door; that he was always there to shake his head and tell me it was going to be ok. I was going to be ok.

But not this time. No, not this time. This time, he wasn’t there to pat me on the head or give me that reassuring smile or laugh quietly as I panicked. No, this time, I was on my own with the help of my friends, one of whom later told me, ‘I know it’s not the same, but you have me.’

And for that, I am lucky. So lucky. And while I realize that, at the end of the day, I still want it to be him. I’m so grateful for the people who love me and answer their texts and IM’s when I’m freaking out, but when it comes right down to it, I still want it to be him. In a weird way that feels selfish, but I think the grieving person might agree with me. At least, I hope they do. He did something for me that I’m not sure anybody else will ever be able to do, to be honest. He knew me. He understood me. He was my best friend. And man, do I miss him. Every, single, day. Holidays, Tuesdays, Sunday afternoons and every day that I almost take myself out.

When I share these stories with you, I always try to end with some kind of moral to the story – some kind of message of hope. But this time, I’m sharing this with you because I want you to know that these feelings that come up for us in our grief journeys are normal. We might not always talk about it, or be honest about it, or be totally transparent in what we’re thinking. You might feel selfish, like I did. Or you might feel like you’re bothering people. Or you might feel like they won’t ‘get it’. But I’m here to tell you, as still living, breathing proof, that what you’re feeling and thinking is, in fact normal. And it will hit you when you least expect it, and it will feel really bad, but at the same time, you will survive it. It may not feel like it sometimes, but you will.

I’m healing. You’re healing. And that healing process is not dictated by anybody but you. So, you do what you have to do for you. Feel what you feel. Embrace it. As hard as that is, you will get through it and I promise you, you will be ok, even if you have to be ok alone.

On a side note, I called the restaurant today and it was tuna in that salad. Not crab. I’m not allergic to tuna, I don’t think. So, my nine lives continue… And so, will yours.”

This story was submitted to Love What Matters by Diana Register of Meridian, Idaho. You can find more of her books here. You can follow her work on her author Facebook page, and Instagram.