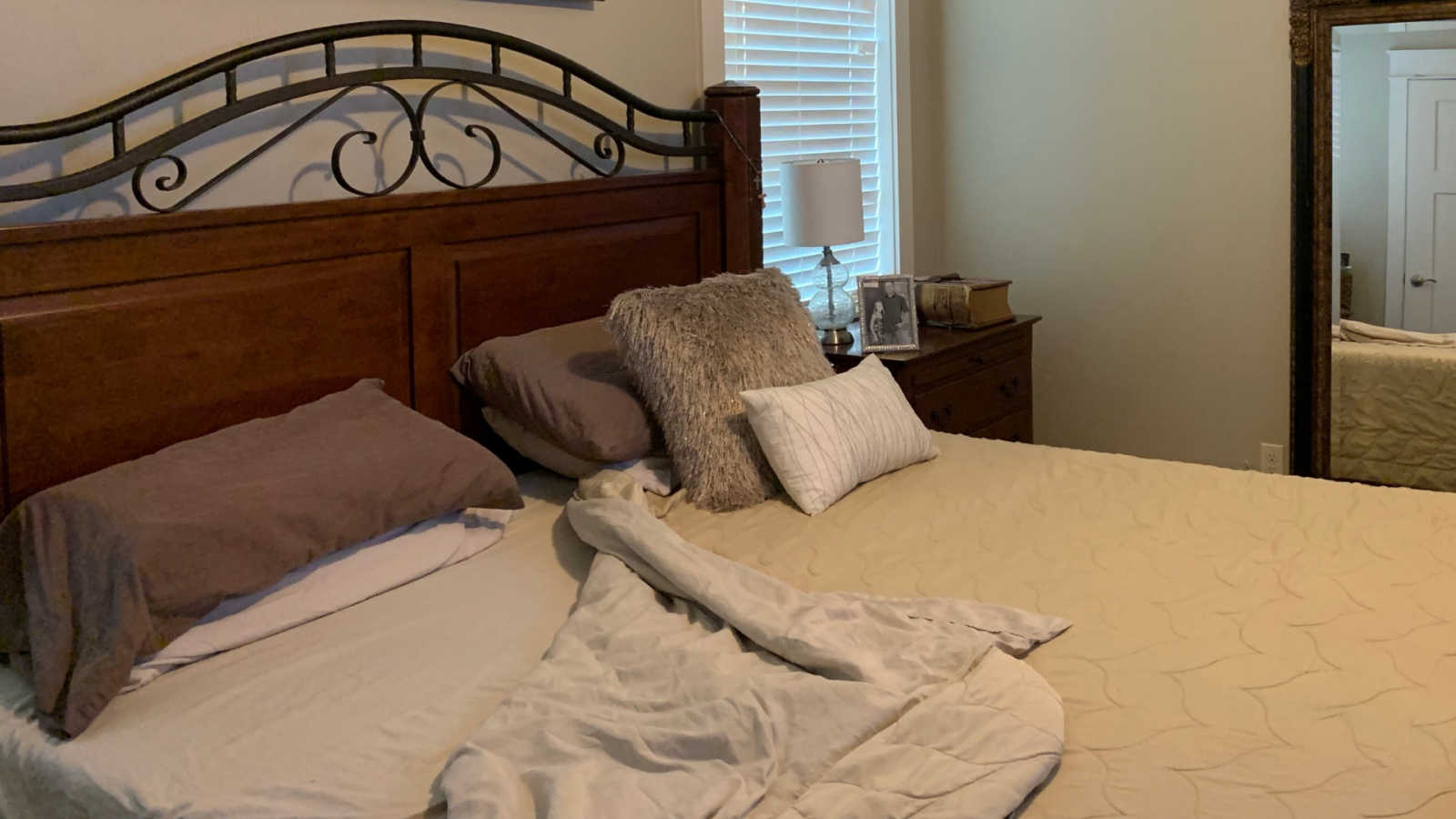 “After my young husband died, I joined several grief groups. I wanted to connect with people who knew what grief was, but more importantly, knew what I was feeling. The ups, the downs, the in-betweens. All of it. I wanted people around me who knew that grief sucks as bad on a Tuesday afternoon at a red light as much as it does on Christmas morning. I wanted to feel like I had a community who ‘got it,’ and who understood that some days we are ok and some days we are not.

I’ve thought about that a lot. I still think about it a lot. I wonder the same thing sometimes. And, the simple answer is, ‘never.’ It never ends. It never goes away.

Grief was an unwelcomed stranger that appeared on your doorstep one day and it has never left. He moved in, took a place in your life and started eating all your food. He sleeps in your bed. He follows you into the shower. He goes to work with you. He attends your kids’ events. He pets your dog. He infiltrates your life in the cruelest way. He takes over and confuses everything. He messes up your life, and your hair. He changes your outlook, and we let it. Because we’re tired. We’re sad. We’re broken and we’re lost.

And so, we try to get rid of him. We try to kick him out. We pack him up and throw him out the door and as soon as we slam it and lock it, we turn around and he’s back sitting in the recliner throwing trash on the floor. We’re frustrated, so we talk to our friends and counselors about how to get rid of him. We rally the troops and we find things to help us ignore him. We stay busy thinking that if it’s out of sight, it’s out of mind. We even try to replace the person we’re missing. We think if we can fill the void, maybe we can feel better, but grief just hangs around and laughs.

We try to walk around it, under it, over it but we will be damned to walk through it. Because that kind of pain is immeasurable. It’s searing. Walking through it is like volunteering to cut off your hand with a dull knife. Nobody wants to do that.

I remember the first time I really felt my grief. It wasn’t right after he died. It wasn’t at his funeral or even a week after that. For me, it came about six months later. I was in bed. The room was dark and cool, but I was having trouble falling asleep. My mind wouldn’t turn off. I tried everything and then looked over to his side of the bed. He wasn’t there. I knew he wouldn’t be there, but for the first time, it really hit me that he would never be there again. I reached my hand across the sheet, up to the pillow and traced it. My breathing was quiet. I was listening for him, I guess. My eyes were heavy and fixated on the blank space in front of me and before I could stop it, heavy tears fell. I instinctively shot out of bed, wiping my face and concentrated on deep breaths. ‘No,’ I thought to myself. ‘No, I will not do this.’

I looked to the corner of my room and saw grief sitting there, smiling, tipping his hat with a wink as if he were welcoming me to the party. I looked back to the bed. Still empty. And then it happened. I fell to my knees, and then to my back. It came from up from my gut. I could almost physically feel it moving to the top of my abdomen, to my chest, into my neck and then my head. I cannot describe the pain. It was like my soul was slowly being ripped away from my body. I was covered in the heaviness of it all and could not control any of it. Not the feeling, not the thoughts, not the horrific sounds that came with it. Nothing. I was consumed. I was consumed with grief. I laid on the floor in the fetal position and let grief take over. I let the pain in. I let the nightmare play out. I screamed. I banged my fists on the floor. I pulled at my hair and I writhed. I cried. I cried harder than I ever have in my entire life and then as suddenly as it came, it was gone. The room was still. It was quiet. My body stopped convulsing. I took a deep breath in and looked around. I looked back to the corner, hoping grief was gone. But he was still there. He was still sitting there, watching. But this time, when I turned my head in his direction, I looked him in the eye. I locked onto him.

And in that moment, his eyes softened, and he cried with me.

Grief still hangs out with me to this day. But, he doesn’t scare me anymore. I don’t fear him. I’m not trying to get rid of him. And the less I fight him, the less he comes around. He doesn’t take up residency in my life anymore, but he does come to visit. Sometimes, he stays for days, sometimes, he stays for minutes, and sometimes, he just walks alongside of me. For so long, I viewed him as my enemy and now, I view him as a reminder of how thankful I am to have loved somebody so much, and so deeply, that it was so hard to lose.

So, yes, the answer is, grief never leaves. But, we can learn how to let grief walk with us, without controlling us. I liken it to this:  When I was younger, and before camera phones, we had to actually print out pictures if we wanted to see them. And when they were first printed, they were full of vibrant colors and you could see all the details in the photo. Yet, over time, as the picture aged, it faded. The colors dimmed. You couldn’t see the details as well. The corners ripped. The picture was still there, but it wasn’t as clear. You remember the moment, and the feeling, but you don’t see it as clearly anymore. And for me, that’s what grief is. It’s always there but it does get better. You just have to allow it. You have to feel it. You have to go through it. You have to stop fighting it. And, when you least expect it, you will come out the other side. I promise, you will come out the other side, even with grief holding your hand.”

‘They don’t look like they’re brothers. My boys have the same mom and dad. They are not the same.’: Mom urges us to take action against racism. ‘Show your kids there’s beauty in their differences’

“I live in white suburbia. There will come a day when I have to explain to my kids why they are being treated differently than their friends or even each other. When they grow up and ask me what I did to effect change, I hope they’ll be proud of my response.”

“He’s avoided walking down grocery aisles. People call him Obama because he’s very well spoken…for a black man. He’s been told, ‘Our entrees start at $50,’ as we walked into an upscale restaurant. He’s listened to heinous racial slurs casually dropped. But don’t worry, they apologized afterwards. They would never want to offend him.” 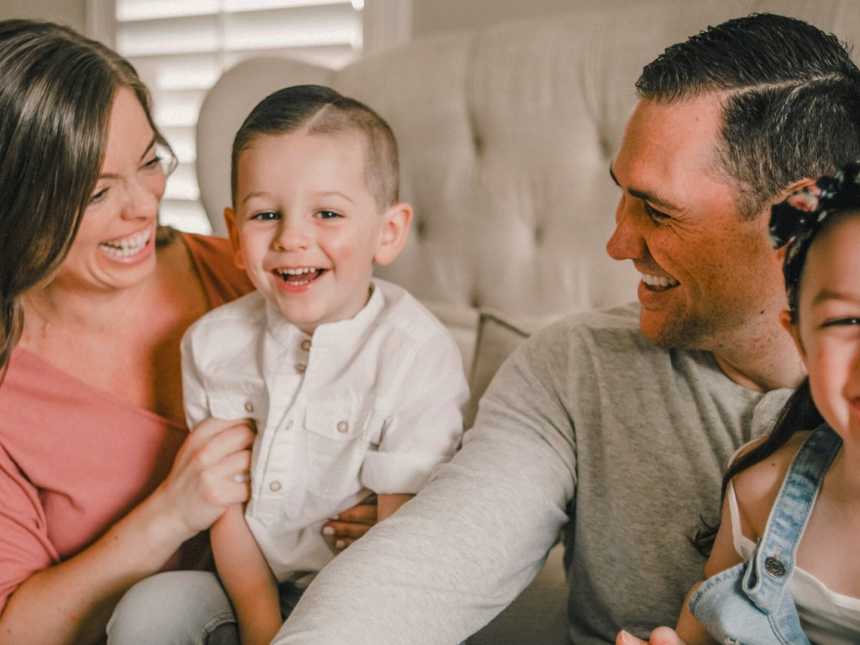 ‘You recently ‘re-homed’ your adopted son after discovering he had autism and needs ‘you weren’t told about.’: Mom pens open letter to Myka Stauffer, ‘You tapped out right before the big pay day’

“I like pretty pictures too. This feels familiar to me. I know this because I’ve experienced both firsthand. I am not here to cast stones, nor empathize. I just want to talk, mother to mother.”