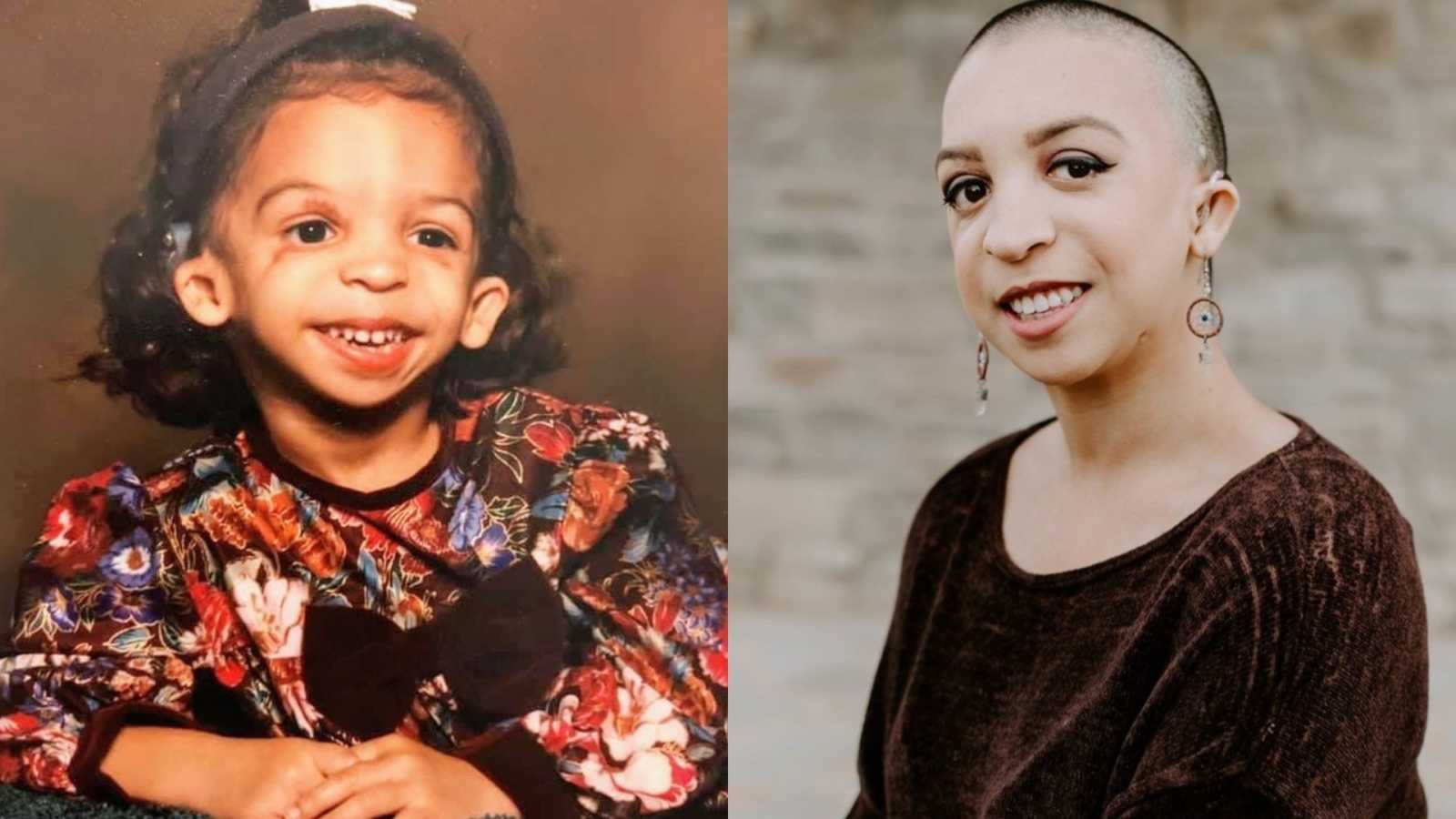 “I was born with a rare facial condition, Treacher Collins Syndrome (TCS), which resulted in having close to 20 surgeries and procedures throughout my life. TCS is a genetic mutation change in a gene that causes bones deficiencies in the face and head. The syndrome leads to a small jaw and airway, malformed ears, hearing loss, and other medical issues.

My mother also has TCS, though mildly, and didn’t find out until after she was already pregnant with me. She learned at the same time there was a ’50/50 chance of passing it on.’ I was born with a moderate expression of my syndrome and required lots of painful surgeries. But through it all, even in the moments when I lacked confidence and was insecure about my differences, in addition to the stares and comments, I wouldn’t change a thing. If I had a choice, I would choose my syndrome all over again.

My first surgery (unrelated to my syndrome) was to remove a hemangioma birthmark I was born with. It grew above my eye until the age of 3. I then went on to have several jaw distraction surgeries to improve my breathing, eating, and sleeping. My craniofacial surgeon would strategically break my jaw and place a device that allowed for two rods to come out underneath my chin. My parents would turn the rods with a device three times daily for a period of a month to grow my jaw forward. When I got older and had to have another jaw distraction, I would turn my own rods. It was not easy, and it certainly was not fun, but I told myself, ‘It won’t last forever. Maintain a positive mindset despite the pain.’

Outgrowing the distraction progress is an unfortunate, but common theme, with this jaw surgery. I had the first jaw distraction in kindergarten, but then I would outgrow my new jaw growth within 2 years. I had a second one at age 9 and a third at age 11. It was important to keep up with these jaw surgeries to prevent having to be trached (a permanent breathing tube) or having a g-tube (a permanent feeding tube). I was told, ‘The jaw distractions you have will enlarge your airway and allow you to be able to breathe and eat well.’

When I got old enough, I was able to have a more major surgery (called the LeFort) where both my upper and lower jaws were broken and realigned. I was in high school, and having that surgery changed a lot for me. It gave me a fuller face at a time I was self-conscious about my looks. A lot of my peers began to date in middle and high school, and I often felt I would never get to experience those things. I truly felt during this time that TCS held me back, or somehow made me less desirable. Middle and high school is usually difficult for everyone in some way; it was difficult for me because of the issues associated with my facial difference.

I was also born deaf. My mother was able to have me fitted for special hearing aids at several weeks old and, therefore, I have been fortunate enough to hear sound all of my life. This special device, called a bone conduction aid, is on a headband that vibrates sound through the skull. When I was ages 6 and 7, I was old enough to have man-made ear canals built. My mom researched and found the best ear doctor in the world, only a few hours away. I only had openings to my ears, no middle ear bones or canals for sound to travel. Ear canals meant I could start wearing the type of hearing aids I wear now.

Behind-the-ear (BTE) hearing aids consist of an ear mold designed to specifically fit inside of your ear. Tubing connects the mold to the hearing aid, which sits behind the ear. Like all technology, hearing aids become outdated or eventually don’t work as well, which requires upgrading. I have had three sets of BTEs and received my newest and best set this year. It has been a lifelong struggle to continuously be fitted for hearing aids, deal with earmolds and tubing, and adjust to everything that goes with it. Having man-made ear canals has proved to be a unique situation. I continuously have issues with the material of the molds irritating my canal-grafted skin by rubbing against it. Sometimes I’ve even lived with permanent indentions and scabs where my hearing aids lay on my ears.

3 years ago, I had my first major surgery as a young adult. Prior to this, I hadn’t been inside of an operating room for over 6 years. After years of surgery, my jaw endured so much it slowly starts to fuse, making it more difficult to open my mouth. The doctor explained, ‘Part of the surgery is to work on increasing the opening of your jaw again. Another portion of the surgery is to place bone under your eyes for support due to the lack of cheekbones.’ The deficit under my eyes caused me so much trouble with the continuous watering and running of my eyes, and also dark circles underneath.

This surgery was going to require my surgeon to make a deep incision in my skull in order for him to take the bone. I put a lot of thought into it for weeks, and the night before surgery I decided, ‘I am going to shave my head.’ I have been a bald woman ever since—something I never thought I would be. I would sometimes use my long hair as a shield, but once I didn’t have it anymore, I was forced to be seen. All of my differences were out in the open. It was exposing, but taught me pretty quickly I had no choice but to embrace what made me different.

I can remember being younger and dreaming one day it wouldn’t be noticeable I had a facial difference. Every surgery I have had was necessary to improve my quality of life. Having so many surgeries sometimes led me to have a less healthy mindset of wanting to fix my differences to look more typical. Even up to the point of shaving my head, I had not accepted all of my differences unconditionally, and this act alone changed me and I grew so much more. I’ve realized life rewards us when we embrace who we are and our differences.

It is not ideal to grow up spending your summers in the hospital, but having a syndrome and being different gave me a rare opportunity to have a different perspective, and show how diverse people can be. I’ve been able to advocate and bring awareness, not only for my own differences but for others as well. I still have moments where I lack confidence, as we all do. I still get stares and sometimes comments. I could choose to feel inferior, but I choose to feel nothing but empowered.”

This story was submitted to  Love What Matters by Olivia Miller. You can follow her journey on her  Instagram and her website. Submit your own story  here, and be sure to  subscribe to our free email newsletter for our best stories, and  YouTube for our best videos.

‘Why isn’t anyone congratulating me? Sadly, my daughter’s arrival wasn’t celebrated.’: Woman gives birth to baby with Treacher Collins Syndrome, ‘our normal is different but I wouldn’t change it for anything’

‘They put him on my chest for the first time. The doctors did a double take and immediately took him back. ‘Treacher Collins? WHAT?’: Little boy with Treacher Collins Syndrome spreads kindness and acceptance

‘I swallowed my own tongue and went blue. One week into school, the bullying began. ‘Why should I be moved and not them?’: Teen with Treacher Collins Syndrome urges ‘we are all unique and amazing in every way’