Disclaimer: This story contains mentions of suicide and may be triggering to some.

“It was the Wednesday before Easter break, and the kids had a half day of school. Evan was twelve and in sixth grade, and Ava was six and in kindergarten. Evan got home first and was upset about a disagreement he had with a friend earlier at school. We sat down on the couch and talked about it. He always told me everything, until this day. We talked about what we were going to do over Easter break and about celebrating his cat’s second birthday. We were making plans and he seemed to be in better spirits.

He told me he and his friends made plans on the bus to play after school. He ran upstairs for a few minutes and ran downstairs, pointing out a watch he was wearing. He said he found it in his room and decided to wear it. He then took off out the front door to his friend’s house. By this time, my daughter got home and we went upstairs. I heard my son open the door and he yelled up, saying they weren’t home and he was confused because they had just talked about playing.

I heard him go into the garage and then he came in and yelled upstairs that he was going to go play at the tree stand. It was in a small, wooded area behind the neighbor’s house. He played there often, so I didn’t think anything of it. A little while later, my daughter headed out to her friend’s house to play, two doors up. I walked out back and called for Evan but he didn’t answer. I thought maybe he ran down the street to see if his friends were home.

I went back inside and did a few things and then went back out. I called for him again and still no answer. I saw my daughter playing outside and walked over to ask if she had seen Evan. She said he was just running around in the backyard and then took off back into the woods. My neighbor was outside so we chatted for about ten minutes or so. On the way back home I stopped at the back of the yard and called for him again. I could see the tree stand but didn’t see him.

I decided to run back inside and throw a pizza in the oven. He had parkour that evening, so I wanted to make a quick dinner before we went. He still wasn’t answering and I was worried at this point, so I walked into the woods and I saw him kneeling next to the tree. He wasn’t answering me, and as I got closer I saw the rope. I grabbed him and picked him up and started screaming for help. I remembered I had my phone so I called 911. I didn’t know what he had done, but it wasn’t good.

The ambulance and police finally arrived. As they pulled him from my arms I fell to the ground. I can still feel the leaves sticking to my wet face. The detective dragged me to the house and I stopped at the bottom step of the deck and started calling my husband but I couldn’t get through. I called my aunt and uncle to come over and then a family friend to get my daughter. They wouldn’t let me near my son and dragged me inside.

I knew it wasn’t good…I knew he wasn’t breathing and he wasn’t getting oxygen…and I knew what that meant. I don’t honestly know how much time had passed, but my uncle left in the ambulance with my son and my neighbor drove me to the hospital where I met my husband. The doctor was crying and he said they were doing everything they could, but his heart never started. He asked for permission to stop working on him, as by now he’d be brain dead.

They let my husband see him but I couldn’t do it. I didn’t want to see what they were doing. When they finished they brought him to us. At this point we thought he had died by suicide. We didn’t understand. He wasn’t suicidal. He came home upset, and he had been having issues with bullies and the school, but we were meeting with the school. Things were getting better. We were making plans. Suicide did not make sense, but we didn’t know what else it could be.

The coroner’s office called to say his cause of death was suicide. I still remember the call. I wanted to say that can’t be right, but I couldn’t get the words out. I was completely devastated. My sweet boy was gone. My husband and I started researching what else could’ve happened. We were obsessed and wouldn’t stop until we found answers. We came across something called the choking game/pass out challenge. It resembles suicide, but it’s not…it’s one of those deadly internet challenges that are all over YouTube.

I contacted the lead Medical Examiner and requested a psychological autopsy. He agreed Evan’s death was an accident and changed the cause of death to accidental asphyxiation. We then found out this challenge was going around the middle school, and bullies dared him to it the day before he died. The school denied this, saying it was an isolated incident and their students were not doing this, however, we know that is not true. They refused to alert parents and students.

In fact, they sent an email to the entire district, without our knowledge or approval, stating our son died by suicide, which can be the result of a mental health disorder. Our son had ADHD, anxiety, and high-functioning autism, but he was not suicidal. To this day, the school refuses to allow any of his classmates to do anything for him at school in memory of him, though they have done things for students who passed away after him.

We found out students were still doing it and showing videos to kids during school. This game has been around for over 50 years, but has become more prevalent with social media and YouTube. This is not a game at all, but it is presented to the kids as such. Children as young as six years old have died from this, but the average age is 9-16 years old. Please talk to your kids about the dangers.

Cutting off the flow of oxygen can lead to brain damage and death. After a few seconds without oxygen, you will pass out. After four minutes, brain damage and death occur. I believe my son was planning on doing this with his friends but decided to try it on his own since they weren’t home. He was using the watch to try to time himself, but he passed out sooner than he thought. I had never heard of this before, so I couldn’t talk to him about the dangers.

I am sharing his story so others will have the chance to talk to their children, and so other parents will not have to suffer the pain of child loss. It’s important to know no child is immune to this. I never would’ve imagined I’d lose a child, let alone to this. Evan was smart, kind, and caring but even smart kids can make bad choices. I know he’d want me to share his story and save lives. Evan was a good kid…he just made a bad choice.”

This story was submitted to Love What Matters by Dana Ziemniak. Submit your own story here, and be sure to subscribe to our free email newsletter for our best stories, and YouTube for our best videos.

‘I found my son lying on the ground, his little heart jolted out. I cradled him in my arms as his soul left his physical body.’: Mom loses son to rare cardiac arrest after struck by baseball bat

‘Does he smoke or do drugs?’ My 19-year-old son was having heart attacks. He said no, but all she kept asking was, ‘Does he do drugs?’: Mom loses son after hospital malpractice, ‘This is systemic racism’

‘Honey, they’ve tried reviving him 6 times. He’s not coming back.’ I was barely hanging on.’: Mom loses son to fatal car accident, finds ‘beauty in the ruins’ of child loss

‘Be back in the morning, mom.’ He smiled. At 2 a.m. I awoke to police at my door. My beautiful son had been shot multiple times.’: Mom loses son to stranger’s act of violence, ‘I will live more fiercely for him’ 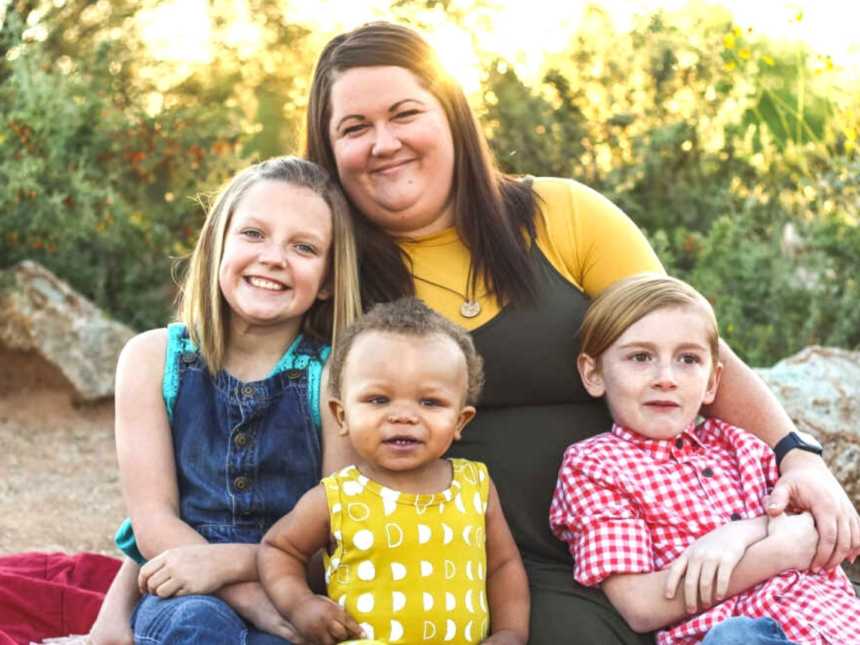 ‘My husband decided to leave. ‘You won’t get a newborn because you’re single.’ I listened to the heartbreaking situations.’: Woman becomes foster mama after divorce, ‘My life is full of beauty’

“I sat my two children down and we had a conversation about foster care. I told them, ‘It will be hard to love on a baby and then have to say goodbye.’ They were both in.”

‘We got pregnant after our first date.’: Woman details addiction journey after birth of son

“I drank and pretty much slept with anyone–all while I was supposed to be being a mom to my 8-month-old son. My son was about to turn 1 and even though he didn’t know it, his own mother was getting ready to die, not getting ready for his party.” 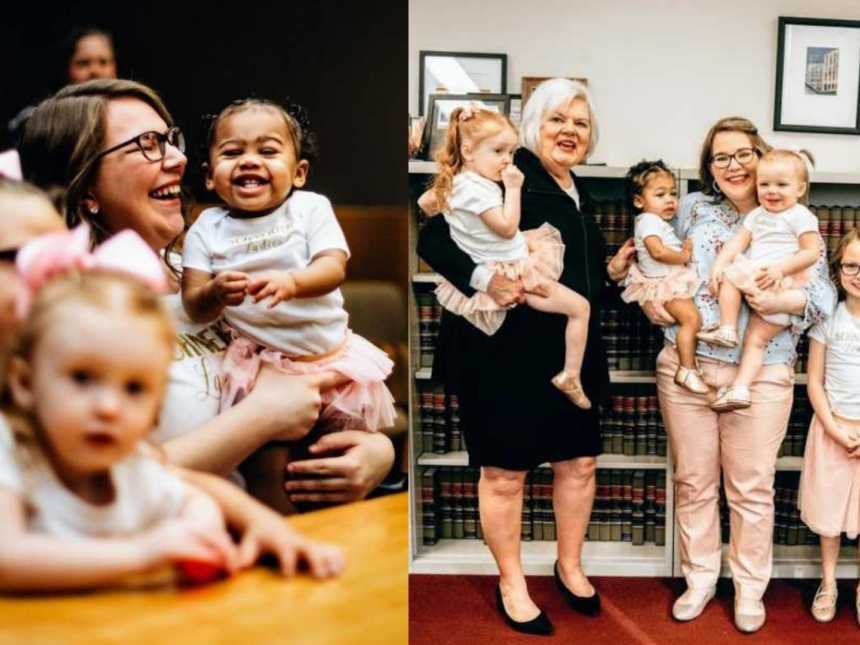 ‘I think it’s best to move them into a 2-parent home.’ I had failed. They were concerned I wasn’t committed to their care.’: Single mom of 5 shares adoption journey, ‘These girls are my world’

“I got the call. ‘Can you take in your adopted daughter’s biological sister who has just been born?’ I hid in the bathroom and just cried. I sobbed to the CPS worker: ‘I know what my answer needs to be, but it’s going to be so hard!'”