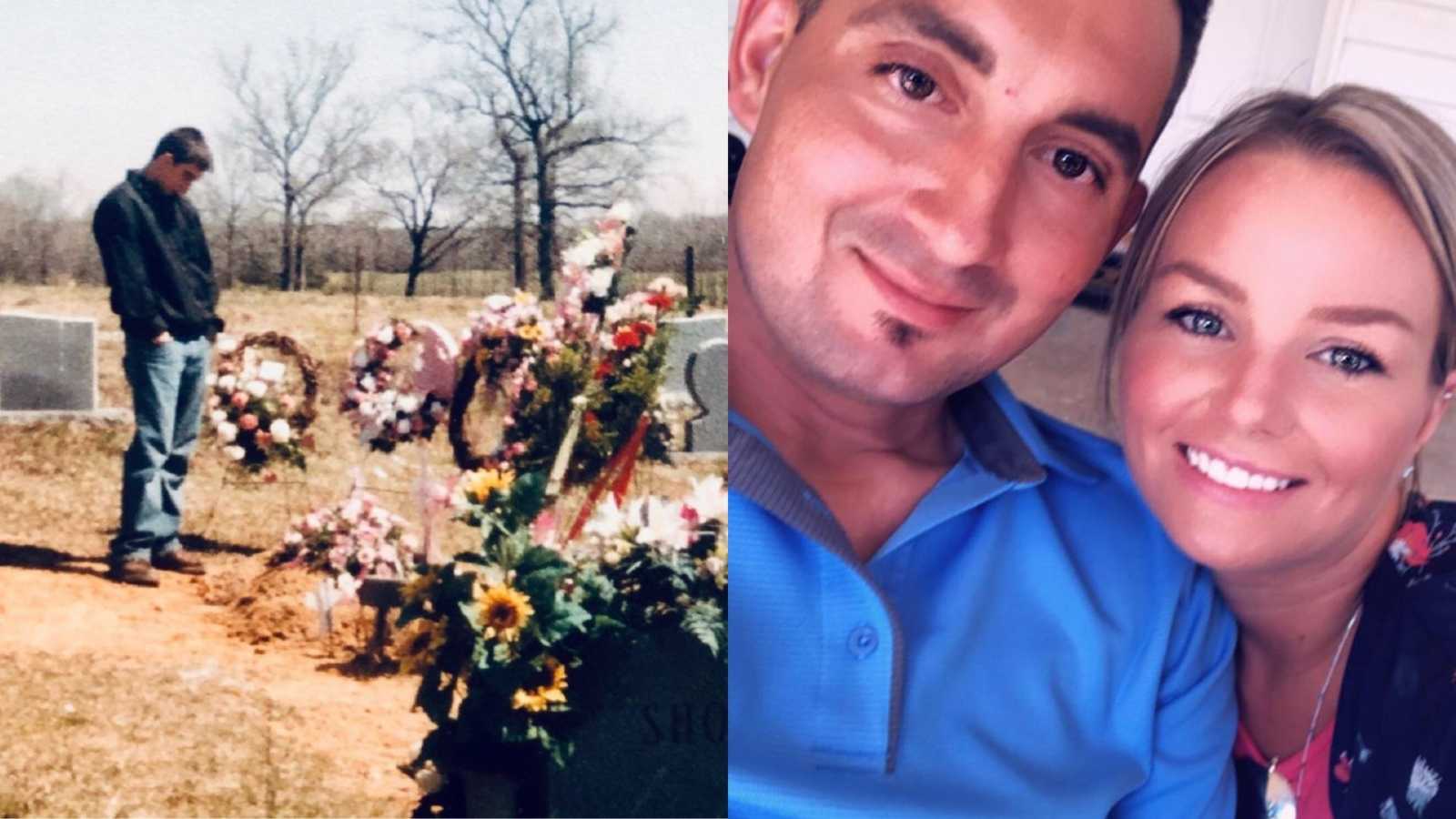 “To understand our story a bit better, you’d have to know how it started. My husband Nick and I met when we were seven years old. My mom’s brother married his mom’s sister. My uncle Brian used to bring Nick around and joke about how we’d get married someday. As kids, we were like, ‘Ew no way!,’ all the while secretly having a crush on each other.

We could never imagine what an important role Uncle Brian would play in our lives or how we would lose him only seven years later when he was just 33 years old.

Fast forward ten years and we start dating. A year later and we were married. Yes, looking back we were way too young ,but when you’re in love, nothing can stop you.

About a month after we were married, I became so sick. Extreme nausea and vomiting to the point I could barely get out of bed. I took a test and sure enough, I was pregnant. I was diagnosed with hyperemesis gravidarum (or HG) which explains the sickness. I was due on my birthday, March 22, 2005. We were so happy!

At our first OBGYN appointment they performed an ultrasound, and all in a matter of minutes, we learned we were having a baby girl – and she also had some sort of heart defect and cystic hygroma. Shattered would be an understatement. I cried for days.

The doctor referred me to a specialist in Shreveport (a little over an hour away) because I was now high risk. From then on, we would make the 3-hour round trip two to three times a week.

We were pressured into doing genetics testing because they thought her two birth defects most likely were related. They found nothing! It was soon determined her heart defect was Hypoplastic Left Heart Syndrome. We had never even heard of this before. The doctor told us our daughter would mostly likely be stillborn and wouldn’t make it to term so we should really consider abortion. This doctor repeatedly suggested aborting our baby, but we were bound and determined to give this little girl a fighting chance. We loved her so much already.

Every single day I had to count and track her movement just to make sure she was still with us. It was the hardest and scariest time of our lives so far. Knowing we could lose her at any moment and not knowing what the future held.

As we got closer to her due date, we were told that the hospital was not equipped to deal with a baby as sick as ours, so we were sent to Oschner in New Orleans to wait the last six weeks. After just two weeks, it was time to deliver our baby girl. There was just no amniotic fluid left and they couldn’t explain why. So on February 23, 2005 (her great-uncle Brian’s birthday! What are the odds?!) at 5:06 p.m. our Alexia Paige quietly made her entrance into the world by cesarean section. All 4 pounds, five ounces and seventeen inches of her. She never cried or made a sound, but she was absolutely beautiful and perfect. We counted her tiny fingers and toes like all parents do. She had my nose and chin and the most stunning blue-green eyes. The doctors also couldn’t explain why or how, but her cystic hygroma were gone!

We never got to hold her because she was quickly whisked away to the NICU. It would be a full day before we got to see our daughter again and FINALLY touch her. We waited so long for this moment. It was the longest day of my life. We were finally allowed to go in and see her, but it was terrifying. Not only did we not know what to expect but being surrounded by all of these precious, fragile babies was an eye opener. How many parents and families had stood where we stood and felt what we felt at that moment? Up until this point we had felt so alone in our journey, but quickly realized that was far from the truth. This was a whole new world we were stepping into that no parent should ever have to be in.

Our Lexi was hooked up to all sorts of machines and seen by numerous doctors and specialists. Over the next week or so we learned that along with the HLHS our sweet girl also had Pulmonary Emphysema. We were told that she would need multiple open-heart surgeries in different stages to give her a chance at a normal life. Without the surgeries she would not survive, but she was so sick and small they only gave her a 30% chance of surviving the first surgery.

We cried and prayed and felt so helpless. We had Lexi baptized and then we watched as they took her into surgery – not knowing if we’d ever see her alive again. After what seemed like forever, they told us she pulled through! We cried tears of joy but knew this journey was far from over. Seeing her tiny little body hooked up to a ventilator and her chest open will forever be burned in my mind. Nothing can prepare you for how awful it is. Within a day of surgery, our baby girl’s organs were overworked and starting to shut down so they took her back into surgery to place a drain into her stomach to get rid of the fluid buildup. During this surgery, her bowl was perforated by the tube and she began to bleed internally. Shortly after, she had a stroke. We were told our baby girl was not showing any signs of brain activity.

‘There is nothing more we can do,’ they said.

My husband Nick and I, at just 18 years old, were faced with the hardest decision of our lives. On March 14, 2005, we removed Lexi from life support. We held her hand and stroked her hair and soaked in every bit of her. She took her last breath in her daddy’s arms. It was the first and last time he got to hold his daughter. The little girl whose name he chose. The nurse wrapped her in a white blanket and handed her to me. I held her and took in every detail of her beautiful face for as long as I could. I held her tiny hand until all warmth was gone. Leaving that hospital with empty arms and a funeral to plan was not how it’s supposed to be. Picking out an outfit for her burial instead of a coming home outfit. We only had a few photographs to remember her sweet face. I felt like I wouldn’t survive this. My heart literally felt like it couldn’t bear the pain. I wasn’t sure I wanted it to. Everything in me ached for my child. My heart actually hurt. I had never experienced real heartbreak until this moment.

How do you get up and survive every day after this? I was sure I’d never be happy again. My husband and I struggled. We both grieved so differently. I was so raw and emotional and he just couldn’t talk about his feelings at all. He had to be the rock, or so he thought. It took many years for him to open up about our daughter and for us to work through our grief and let it strengthen our marriage instead of tear us apart.

We’ve since had two more daughters who are the center of our world. They gave me a reason to love life again and really live, not just survive. But no matter what we do, even in the happiest moments, we are painfully aware of Lexi’s absence. In our family photos, on Christmas morning around the tree, watching our surviving children hit milestones and achievements she never did or will. A song, a smell that takes me back. The reality of what will never be is just as painful. No matter how much time passes, you never get over losing a your child. We’ve built a beautiful life together, but there will always be a missing piece…

In loving memory of

This story was submitted to Love What Matters by Vicki Wilczewski of Louisiana. Do you have a similar experience? We’d like to hear your important journey. Submit your own story here. Be sure to subscribe to our free email newsletter for our best stories, and YouTube for our best videos.

‘Finally, just my mommy and daddy.’ He sighed, before taking his last breath. We whispered, ‘We love you.’: Mom gets sign from baby in heaven moments before giving birth to rainbow baby daughter in hospital