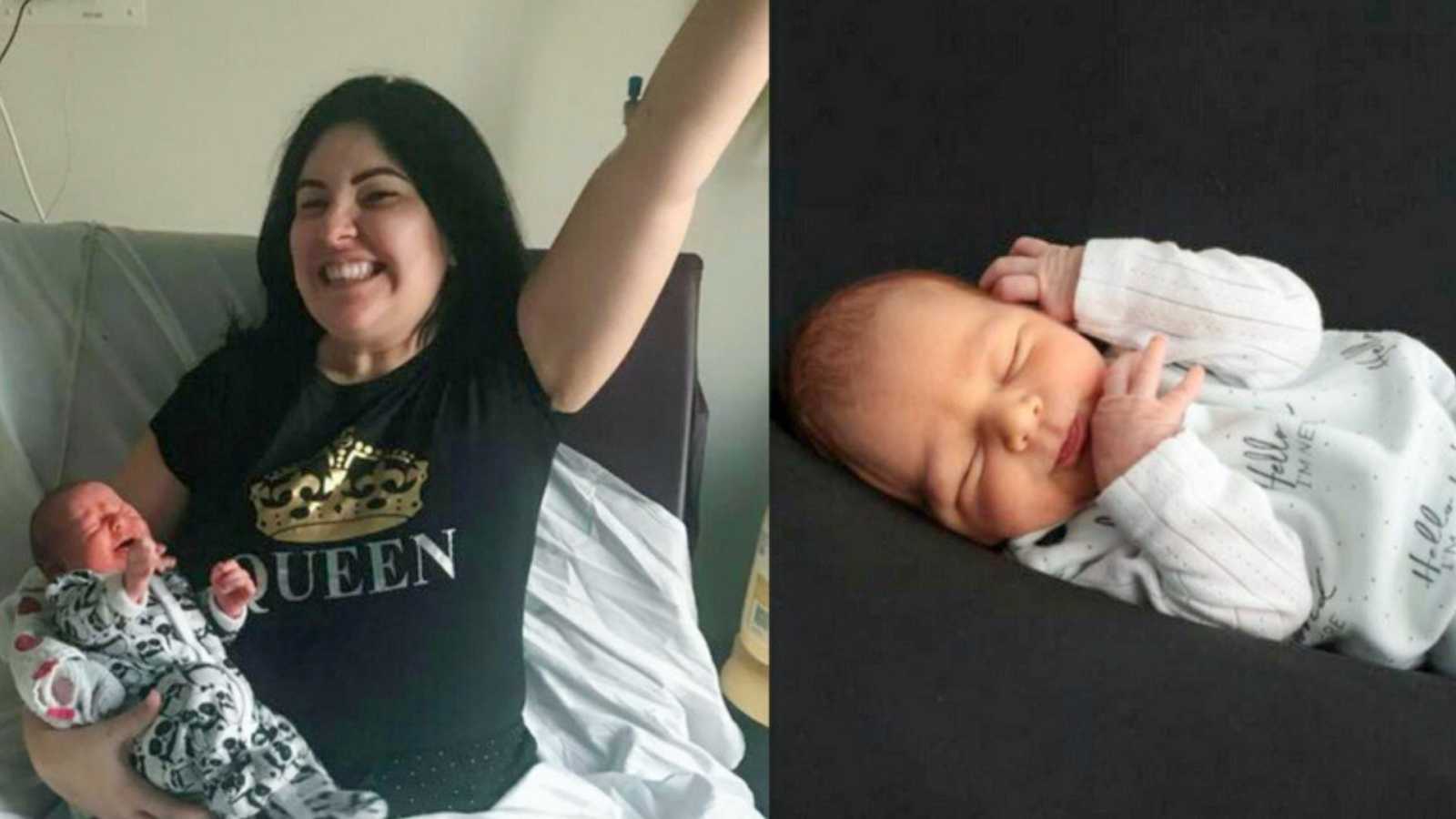 “So here is the story of a girl, a baby and her first ever C-section. It’s long. Whatevs. (It’s the first of many snippets of my hospital stay — It really was the gift that kept on giving.)

I strolled into the hospital at dawns crack and was greeted by smiling women who resemble Smurfettes in their scrubs.

The first Smurfette (lovely, lovely lady) explained everything to me that was going to happen in the gutting of the abdomen and ejecting of the fetus, all with illustrative pictures. Including one with a lady with pink stuff smeared on her back and her bum (which I pointed to and looked at my husband and said, ‘bottom’ and he rolled his eyes) and also to emphasize where the BIGGEST NEEDLE IN THE WORLD goes into. HELLO! And after that, well, I stopped hearing what she was saying and it all went into slow motion like a horror scene where she transformed into an devil that said, ‘BIG NEEDLE IN YOUR BACK HA HA HA’… but she actually said, ‘Did you catch all that?’ And I nodded so hard I felt like Simon from the Wiggles I was so enthusiastic. I think I even gave her the Wiggle hands and said, ‘Gee c’mon!’

I get into the operating room and it’s got more people than an over-30’s nightclub. Everyone is introducing themselves and what they do, but I only paid attention to the person with the drugs, her name was Emma. (I think.)

Anyway, she and her colleague held me over like a bent banana to insert my spinal. That needle went in and felt like it zapped my vertebrae and butt so hard I jumped. I think I actually shouted, ‘Oh yeah!’ in relief that the pain wasn’t THAT bad, and they then informed me that was just the anesthetic needle, not the spinal… Well that went in and a beautiful warmth spread all over my body, kinda like the feeling of too many tequilas, and I snuggled into the bed. I could feel stuff but couldn’t feel stuff, you know? Kinda like when you’ve sat on your leg for too long being forced to play LEGOs with your toddler. I did feel touching though, but no pain, and felt them put a feather in my lady canal, which turned out to be a catheter. Seriously, catheters are underrated. I can’t believe I ever took the time to go to the toilet myself like some peasant when I could just carry a bag around and never be interrupted again. Anyway…

They told me that I’d see the baby after I heard a noise that sounded like a milk frother — a sound I know all too well. So when it started happening I waited to see a baby that SURELY, just surely, resembled me. But instead they pulled this baby out with red hair and an angry old man face, and I turned to the nurse and said, ‘Who’s that guy? He isn’t mine’… turns out that there was no denying him as he quite literally came from my body and his hands spread out like a Messiah as he exited my abdomen crying, equally as shocked as me I imagine.

Afterwards I was wheeled to another recovery place where I began shaking so hard I developed a couple of old Polaroids. Apparently this is a normal side effect of a spinal… again… I didn’t know this. The nurses, as they do, told me how fantastic I was doing even though I was channeling Chan Romero doing the ‘Hippy Hippy Shake.’

I went up to my room where they informed I had lost 1.5 liters of blood (your body only has roughly 3.5 liters apparently) so they needed to give me some medication to help my uterus contract back to its original form. I was like, ‘Yeah cool, no biggy.’ Except then she asked me if I wanted to do it or should she? Because the part I didn’t hear was the part that it needed to go UP MY ASS. I said, ‘Well, I can’t do it. I don’t know where it is!’ So she pushed me over and dry shoved 5 pills up my pooper shooter without offers of lube or a drink first. She literally did it so quick she did a burn out on my dirt track. I can tell you, this was not okay. The pain in all of it was unbearable and I cried like Kim Kardashian. It was ugly. My uterus began to contract which feels like a thousand labors at once, so if you’ve ever only had elective C-sections without going into labor, don’t worry babe, you’ve experienced it ten fold.

So here I am, been in bed for so long I feel like the grandparents from ‘Charlie and the Chocolate Factory,’ with my third child, a distorted vagina from previous pregnancies, and a stomach that begs the question, ‘Is she 7 months pregnant?’

My gut is hanging down like a croissant with a gash covered by a beehive bandage while I hold a squishy warm beautiful baby who is gnawing on my nipples (that look bigger than my dreams) who’s sucking so hard they are bleeding, cracked and look like a new brand of MAC lipstick, who is probably wondering when this milk is actually coming (It’s coming baby, it’s coming) who looks nothing like me at all (typical) — But you know, if you can’t laugh, you cry, and I’ve been doing plenty of that.

So even though I feel like a Hubba Bubba bubble gum that’s lost all its flavoring and gone hard, I’m proud.

Now to mother this child…”