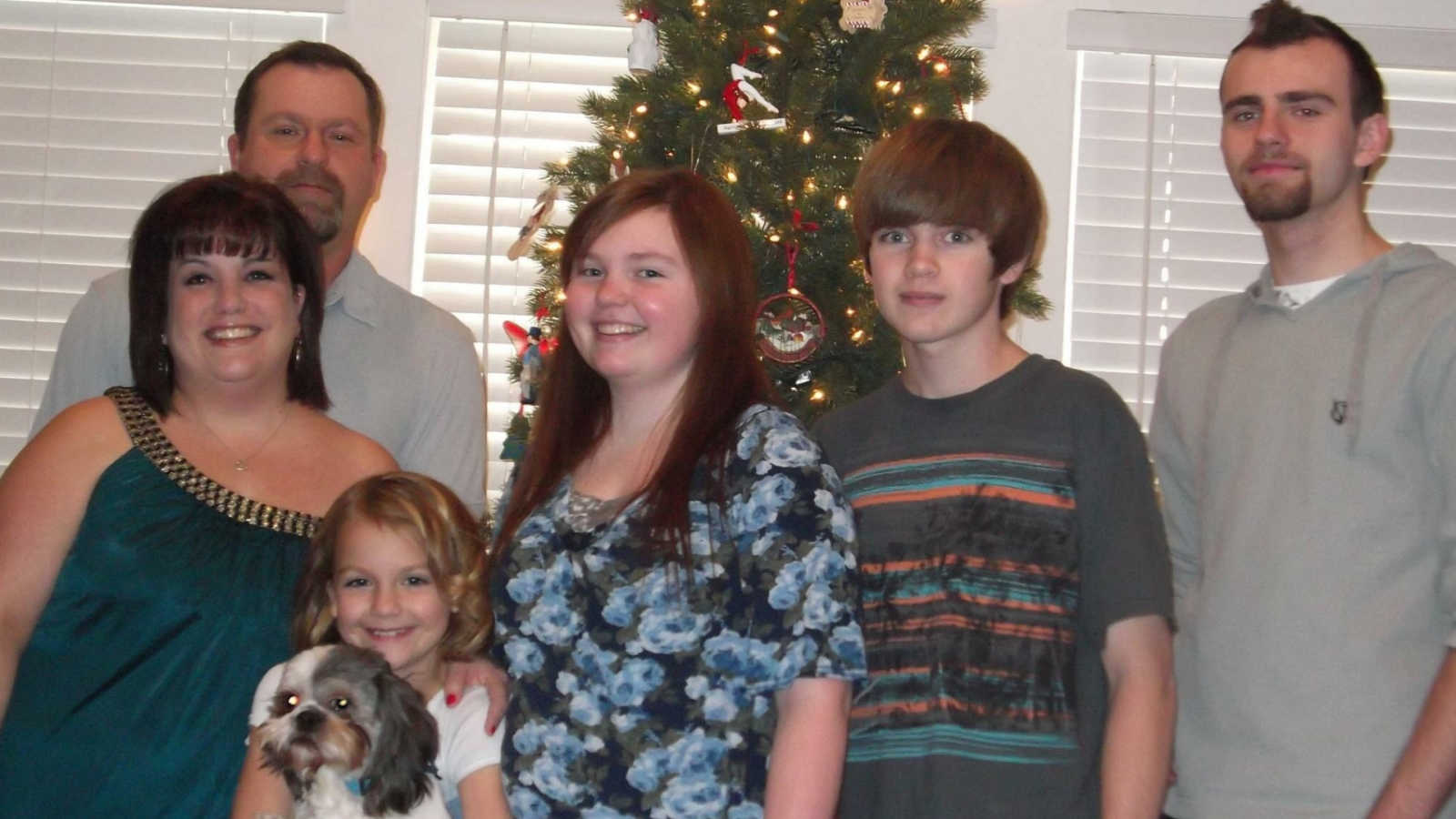 “I have one family Christmas picture. One. Because trying to reign in four kids, a dog and a husband who hated having his picture taken is nothing short of impossible. The Christmas I had my wisdom teeth out and an appendectomy in the same week was more enjoyable than trying to figure out how to take the perfect picture with a bunch of people who really didn’t want to take it. I don’t remember why we had to have the dog in the picture but I’m pretty sure my youngest daughter insisted on it and it was easier to include our furry friend than deal with the meltdown that was sure to follow. Her hair was hard enough to curl when she was little and there was no way on God’s green earth I was letting her mess it up by throwing herself on the floor, nor did I need her eyes red and puffy from crying, so if she wanted the dog in the picture, so be it. I wanted to take the picture so bad that if she wanted the neighbor kid to stand in it, I probably would have given in and told my family and friends we adopted when nobody was looking. Anyway, I was so insistent on having a Christmas picture one year that somehow, I convinced them all to cooperate. I’m sure I bribed them. Maybe threatened them. Heck, I don’t know, but whatever I did, worked.

But the problem is, a Pinterest mom I am not. Honestly, I don’t even think it was available when my kids were little. We had Google. It wasn’t that I didn’t try to be artsy and craftsy, it’s just that I wasn’t any good at it. I really did try, though. I can proudly join the ranks of all the moms and dads out there that have stood knee high in glue, ribbon and Papier-Mache. I have picked cookie dough out of my hair for a week. I even learned to serve the better-looking Christmas cookies in the beginning of a party and bring out the crappy ones when everybody is drunk enough and won’t notice Santa only has one leg and Rudolph has a black nose because I forgot food coloring. Trust me, I tried. My son doesn’t really like cake, for example. But he did like peanut butter cups and on one of his birthdays, I somehow concocted a peanut butter cup tower built with toothpicks, of all things. I have no idea how I got the ridiculous thing to stand up, but I was so damn proud of myself I made a Facebook post about it even though it was God-awful. Six people ‘liked it.’ The other 1,000 friends on my Facebook practiced the old, ‘If you don’t have something nice to say, don’t say anything’ thing.

Ok, no. No, it was not easy. Three hours later, we finally gave up and had one decent picture we could all agree on. Why three hours?  Because if you have never taken a group picture with your camera on a timer, I would challenge you to try it.

Now, my husband could do anything. I mean, he could do ANYTHING. Computer broken? He could fix it. Cable not working? He could fix it. Air conditioner not running? Yep, he could fix it. With a piece of ground cover, no less. But, setting up the camera to work right? Apparently, his Achille’s Heal. We didn’t have a tri-pod at the time but fear not. We had chairs, stools and telephone books. Except telephone books are slippery and cameras fall off. Mid-picture. A 30 second timer is not long enough, or it’s too long. The kids can only smile for so long and so many times, and I truly debated putting Vaseline on their teeth like they do in Miss America pageants to keep their smile open. If the kids smiled at the right time, the dog was moving and ended up looking like a pissed off gremlin. If the dog was still, one of the kids sneezed. If all the mammals were cooperative, my husband would be half in the picture or half out. If he made it into the picture on time, the dog would move, and my daughter would jump off the stool to go after him. See my hand on her shoulder?  It’s the claw of death. I’m literally holding her still. She’s holding the dog still. I’m sure my husband would have taken one step to the left and actually fully been in the picture if he didn’t think he would tip over the tree. Again. I didn’t iron my son’s shirt. Clearly, we didn’t square up the picture with the windows. Everybody’s hands are different. Not only do we not match, but we don’t even have on the same hue. On top of it, the camera is positioned at the worst angle. There is nothing right about this picture, but at the same time, everything is right about it.

I didn’t. Because five years after this picture was taken, my sweet husband died from pancreatic cancer. We missed five opportunities to take pictures in front of the Christmas tree. Five. Because we thought we had time. Five. Because I was so busy, I couldn’t find the time to corral everybody to take them shopping to get matching outfits. Five. Because I thought the picture needed to be perfect and live up to the ones my friends were doing so beautifully. Five. Because I thought, ‘next year, we will make sure we do it right.’

I regret that. I regret not taking more pictures. I regret thinking that we couldn’t take them because it wouldn’t be good enough, or that I had to plan it just right, or look a certain way or hire the right person. I regret not doing more when we had the chance. But, at the same time, as I look at this totally disheveled mess, I realize now, that it was perfect. I always saw the flaws in it, but now, with clearer eyes and with a true sense of what’s important, I now see what I never saw before. There is true joy in their smiles. There is a story in my husband’s grin. My youngest daughter is trying not to burst out laughing holding onto that dog. There is light in their eyes, because in that moment, we were enjoying the chaos of the life we had. We were laughing along with it and creating a memory that would last forever. And because of that, it will forever be my favorite Christmas picture, and a moment that I have etched into my heart and framed into my mind.

Take the pictures, folks. Throw out the preconceived notion that it has to look one way or another, or it has to be staged just right, or that you even have to match. Because you don’t. You just have to show up, turn on the camera and smile. Trust me on this: do it while you can.

P.S. Christmas is right around the corner, and while the following little piece of parenting advice has nothing to do with pictures, several years ago, we figured out the best places to hide presents from your kids and I just had to pass it on. Suitcases. Yes, suitcases. Wrap them, put them in a suitcase and zip it up. They will never look there. Merry Christmas, friends!”

This story was submitted to Love What Matters by Diana Register of Meridian, Idaho. Her books “Grief Life” and “My Kid Is an Asshole, and So Is My Dog” are now available in print and kindle. You can follow her work on her author Facebook page.

‘I never thought I would have to say, ‘Now, kids, don’t go jumping in the attic because, well you know, you might fall through the ceiling one day.’