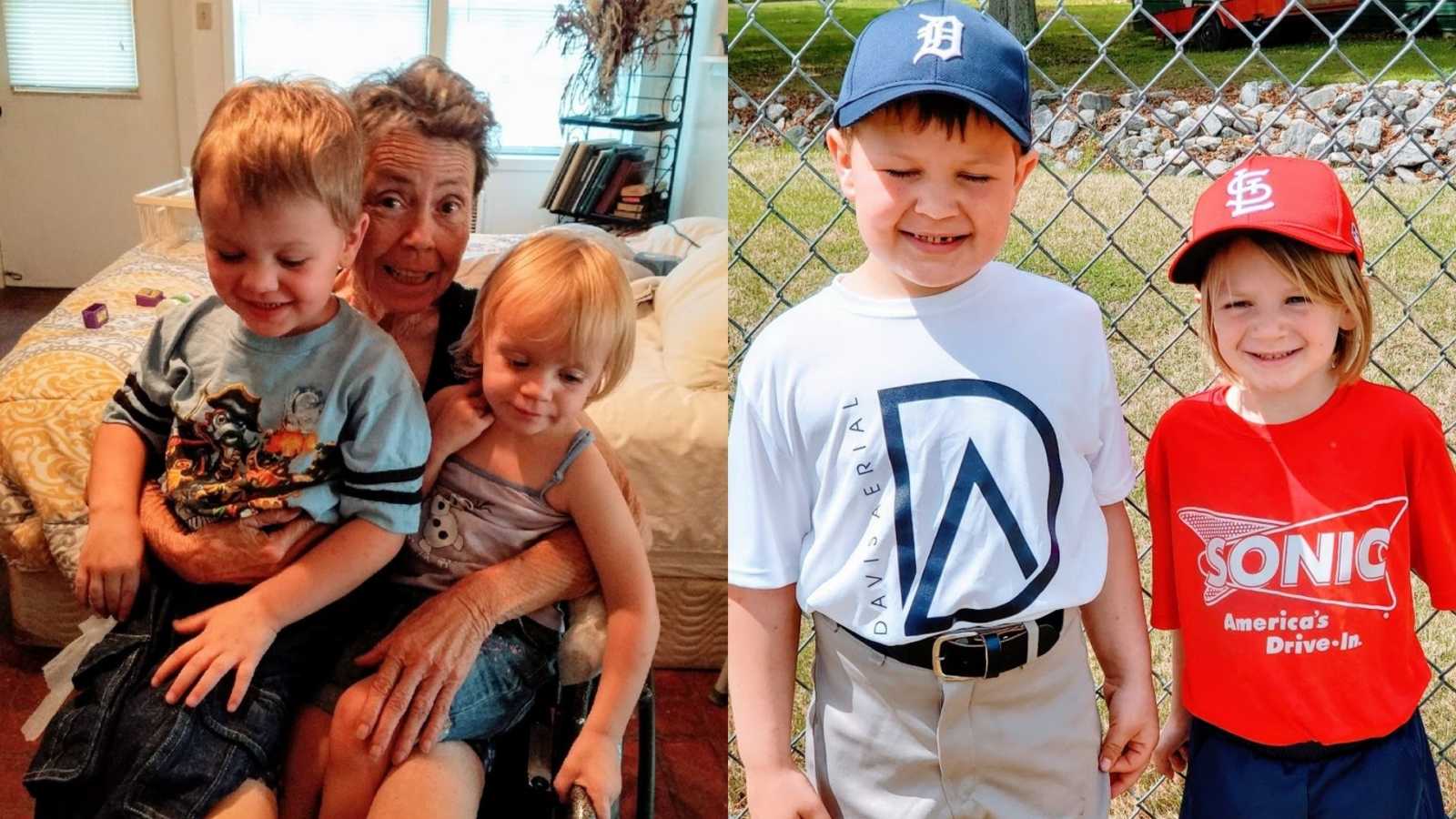 “In August 2015, my husband decided he wasn’t happy and, instead of working on our marriage, walked away. Our divorce was final in February of 2016. My husband had walked out 6 months before the final divorce, so I’d come to terms with it by then. By the time he walked out, I was too old to start over and have time to have children. So I’d given up on my dream of being a mother. I went to BYOB paint classes, hung out with a girlfriend going through her own divorce, and volunteered as a reading buddy to 2nd graders while trying to sort myself out.

About six weeks after the divorce, I received a text from my cousin asking if I wanted to adopt. She had one son at her grandmother’s (my aunt), her second son was in foster care, and she was pregnant with a baby girl. My aunt was in her late 60s at this point, and the grandson she was raising was already in therapy. She couldn’t take on two more.

The timing wasn’t great, but family is family. I knew my aunt was too old to be taking on two more great-grandchildren, but I hated the thought of two baby cousins ending up with strangers. We grew up visiting extended family as often as we could. It was an important stabilizing factor in a childhood of frequent moves. I knew it would eat at my aunt not to know her great-grandchildren. I talked about it with my parents and made sure I wasn’t stepping on my aunt’s toes. My dad worried my cousin would flake and change her mind, my mom encouraged me to move across the street from her, and my aunt cried in gratitude. It wasn’t the best timing, but it was the right thing to do.

My mother knew I had wanted children, and I was starting my life over. When she’d bought her house, they’d thrown in the one across the street. She and my Dad had separated a year before, and she asked me to move there. She was fully on board and fired to help however I needed.

By Christmas 2016, I’d pretty much given up hope of getting the children. The process of getting licensed as a foster parent and the transfer of care approved was long. But I put up my tree, decorated the house, and wrapped gifts. Just in case. Two days before Christmas Eve, just after 8 a.m., my phone rang. I knew it was the caseworker and thought it was just going to be another delay. ‘The fax was waiting for me when I came in. Everything is approved. When can you come get them?’

I stood in the hallway, frozen for a minute. ‘Let me throw my bag in the car and pick up my aunt, and we’ll be there tonight.’ It was a 10-hour drive each way. By the time we got home, it was just after midnight. Christmas Eve. Best Christmas present ever.

Bringing home a 7-month-old and a barely 2-year-old wild child was overwhelming at times. Isaak needed speech therapy and still had food hoarding issues. I had to watch him or he’d stuff himself until he threw up. He was 2 and could say only three words. It was basically two babies in diapers. Kaylee was a super easy baby who rarely cried. It took a lot of work just to get Isaak to sit still in my lap for a book or a cuddle.

I realized I didn’t have the patience I’d had when I was younger. It took a lot of self-reflection to learn to pick my battles and let go of some of the expectations I’d had. Isaak came with trauma-informed baggage, and I needed to learn to roll with the punches. Now, Isaak is my sweet cuddle bug, while his sister is the definition of sass.

Both kids adapted extremely well to a new home, though Isaak was a wild child. My mom took to Isaak right away and favored him. She said, ‘He needs to be someone’s favorite.’ My Aunt Martha balanced it out by claiming Kaylee.

It wasn’t always easy. I remember day 3, after battling Isaak for two hours at bedtime, sitting on my bed in tears. ‘What have I done? I don’t know if I can do this.’ I felt like such a failure. My mom was watching the kids play one day and said, ‘You’ve done a great job with them. You’re a good mom.’ That was the highest compliment I could ever get. ‘I had a great example.’

Unfortunately, she had less than two years to enjoy the kids. My Aunt Martha had liver failure, and my mom was diagnosed with brain and lung cancer. I was crushed, but I had to put that aside.

I got home hospice for my mom and tried to make everything normal for my kids. She would sit in the doorway while they picked flowers for her. Isaak would push her in her wheelchair. I tried to explain to them what was wrong with Gammy, but they were just 2 and 3. Less than four weeks after her diagnosis, she was gone. The next day, my aunt went into the hospital and passed away 10 days after my mom. Whenever the kids hit a milestone…first tooth, riding without training wheels, writing their name…I think about her. ‘Man, I wish she could see this.’ I am a mother because of MY mother. And I wish she could be here to watch her legacies grow.

I don’t think I really gave myself a chance to truly grieve for them. I still haven’t gone through my mom’s clothes and things, and it’s been nearly 3 years. The kids were 2 and 3 when my mom and her sister passed, so they didn’t really understand. I told them they’d both been very sick and have passed away. That their bodies quit working and their souls went to heaven where they wouldn’t be sick anymore. But they’d frequently ask afterward, ‘Where’s Gammy?’ Even now, Kaylee will suddenly say, ‘I miss Gammy.’ One of their favorite things to do is to look through my old photo albums. When they see their pictures, they’ll say, ‘That’s Gammy and Aunt Martha.’ It’s a way to imprint a memory of two women who loved them very much.

Adoption is horribly expensive. Some family friends, while visiting to say goodbye to my mom, told me they wanted to make sure I got to keep the children. ‘Find a lawyer, let us know the cost. We’ll pay for the adoption.’ Before my mom passed, I told her what they’d said. I wanted her to know we’d make sure the kids were safe.

Late January 2020, I wept as I signed the adoption paperwork. Neither birth parent contested it, and the judge approved the adoption. I don’t think the kids understood it. They were 3 and 5 when we finally got our court date. I’ve explained to them their birth mother grew them in her tummy but couldn’t take care of them. That I wanted them so very much, and I’m their mommy.

When I signed the adoption papers, I burst into tears. It was such an overwhelming relief to know I didn’t have to worry they’d be taken from me. After it was done and we’d taken pictures, I took them to play on the playground to celebrate. I changed their last names to mine. I think it tickles my Dad to have them share our name, which is the line that connects them.

The kids are now 5 and 6. They love to play outside, build with Lego (Isaak), and have books read to them (Kaylee mostly). They have age-mate cousins they have adventures with, and my Uncle Stanley still lives across the street. We see their brother and Mawmaw as often as we can. As a 49-year-old single mom, a support system is greatly appreciated.

I remember when Isaak was about 3, we were coming home from church. When we turned the corner he said, ‘Home.’ I smiled, ‘Yeah, buddy, that’s home.’ He said, ‘My home.’ That’s right, little man. It’s your home. And it always will be.”

This story was submitted to Love What Matters by Melissa. Submit your own story here, and be sure to subscribe to our free email newsletter for our best stories, and YouTube for our best videos.

‘Are you in it for the long haul?’ NOTHING we had done prepared us for this moment.’: Mom shares complex journey to adopt son from foster care, ‘We can’t imagine life without him’

‘Will he ever have to leave us?’ my children asked. What I signed up for wasn’t what happened.’: Foster mom shares emotional journey towards adoption, ‘Our family is built on love’

‘If he leaves, I will be wrecked.’ We fought together against the trauma he’d faced.’: Single foster mom says ‘this is just the beginning’ after adopting 2 sons

‘Hours after saying goodbye, I tattooed her handprint on my thigh. Hand in my pocket, I can forever holds hers.’: Mom shares emotional birth and loss of daughter

“Even now, I hear people say things like, ‘Will you ever get over it?’ I could have easily given up at that moment. I could have quit, right there and then. But I knew that if her life ever meant anything, I would need to keep all my promises to her.”

‘Don’t kill your baby!’ they screamed. ‘My baby is DYING. He is going to SUFFOCATE.’ They never bothered to think of what it was like.’: Woman explains importance of reproductive freedom

“They were calling me a murderer, even when it meant ignoring all the medical professionals and simply allowing myself to die along with Finley. My soul was on fire. And I was angry. No one owes you their story. But I am giving you mine in the hopes it opens your eyes.”

‘I know this is the right decision because you’re the family I always wanted for myself.’: Foster mom shares beauty and brokenness of adoption

“The door began to open and it was then I made eye contact with a young woman being wheeled out of the maternity floor, with no baby in hand. As joy-filled as we were, I couldn’t shake the image of her birth mom and how devastated she must have been.”

‘There were times I questioned if I was good enough for all this. But I made it.’: Dad shares journey to overcome addiction with help from music

“I remember lying on a mattress on the floor in a filthy room with an overflowing ashtray, blankets stuffed in the windows, praying to God for better days. Those days came.”