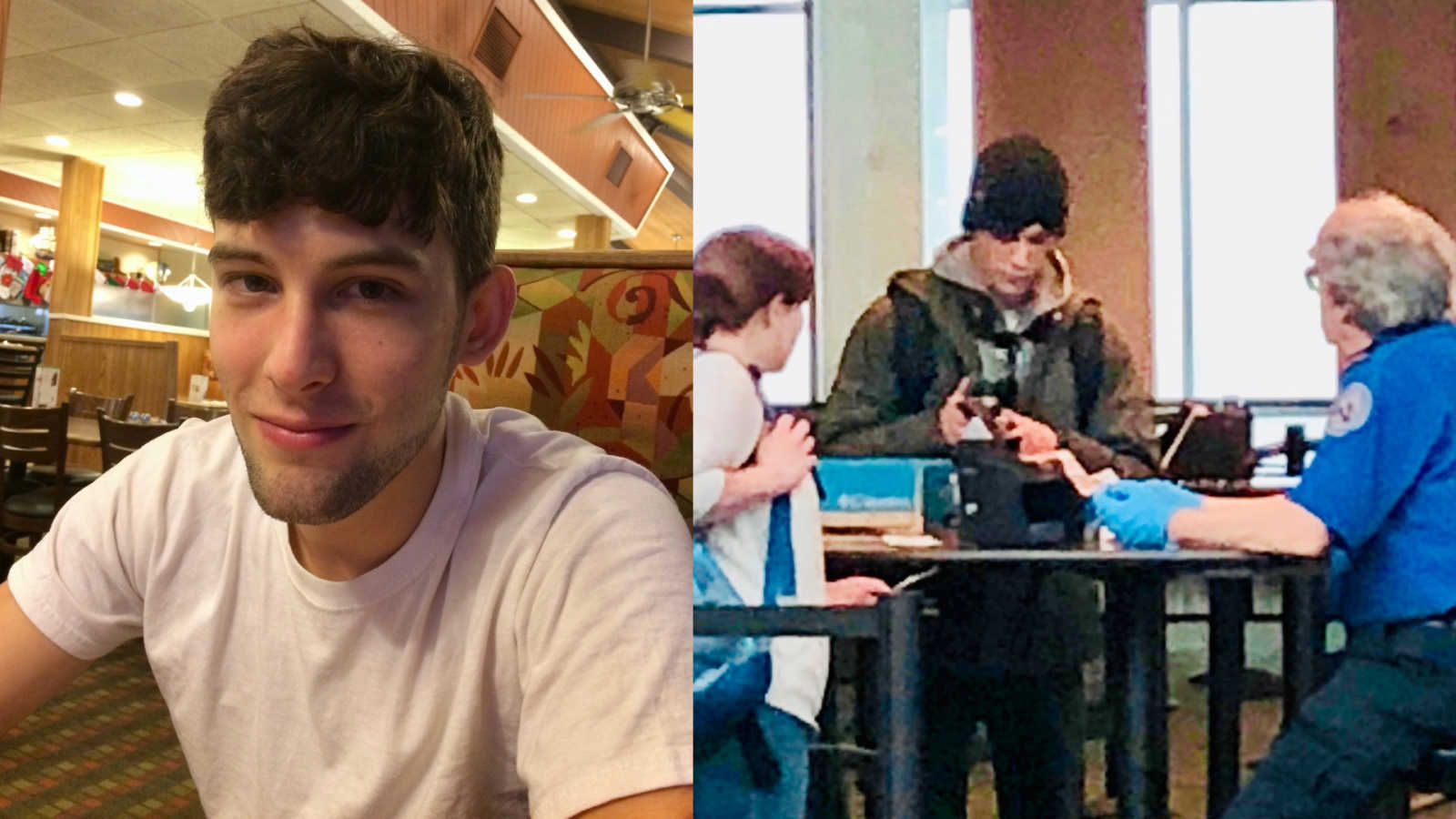 “A couple of months ago I wrote an article for Love What Matters about my son’s addiction and our journey through it as mother and son. I ended it with this sentence: ‘That was 2 days ago. Today he is high again, and today we start all over. And, today I will do what I have always done – pray, hope and not give up.’

Today my story is a continuation of what not giving up can look like, what prayers from strangers can do, and how hope can bring a miracle! After sharing our family’s tremendous struggle with my son’s heroin addiction, which began at the age of 17, he grabbed my phone and wrote his own personal message on MY Facebook page as “the junkie of our family.” I read it with tears streaming down my face, completely and utterly speechless.

I received thousands of comments directed to both me as a mom, and Tyler as the addict… so many comments I could not possibly keep up, as hard as I tried. People found me on Facebook and sent private messages of which I made sure to reply to each and every one, and that would take weeks. I was completely overwhelmed by the support and could hardly believe so many people would read something ‘I’ wrote – which began as a simple Facebook post on my own personal site.

This typing….is Tyler. I am the junkie of our family. My mom fought off abusive men throughout my childhood, she use…

As I was reading through and responding to messages one Saturday morning, I came across a message from a woman in Missouri, Sharon Denice… who shared her own story of losing her mom to addiction and almost losing her brother; and then she said something along of the lines of, ‘I can help Tyler if you are interested. I have the means and a desire to help those I can.’ I’m paraphrasing of course, but you get the idea. I was dumbfounded. I thought back to what I wrote – did I say much about our financial situation, did I mention how difficult it had been to get Tyler the help he really needs on my income? I didn’t really, which is odd because it was one of the most challenging aspects of loving an addict. My #1, biggest frustration from the very beginning was not having the financial ability to help him. I spent thousands of dollars on rehabs, both inpatient and outpatient, through the years, and that was after my insurance paid the bulk. I am lucky – I have great benefits at work, so for a time I could afford care for Tyler, but it quickly became apparent that the ‘kind of care’ he and most addicts need was far beyond my reach and it made me livid. Those close to me would often hear me say ‘you have to be wealthy to get help as an addict – REALLY WEALTHY,’ and we were far from that status. I remember my mom telling me about a woman she knew who sent her son to a rehab in Seattle, Washington, for a YEAR and that I should look into that for Tyler. I did… and it was exactly as I thought, not something that was even remotely within my reach. So, ya, mom… great idea and I agree, but who is going to pay for it?!

I could write an entire book about my frustration with the cost of rehabs, cost of care for addicts and the limited care available to regular every-day, hard-working people like me. I had given up any hope of ever being able to get him the care he really needs, which is long term 12 – 24 months minimum.

So, I read Sharon’s message and so many thoughts ran through my head. How could this be real? Could it be real? Do I respond? Do I reach out and tell her, YES, I NEED YOUR HELP – because that’s what my head was screaming. I didn’t though – not right away. I think I was just scared of being disappointed. I was at my wits end though. Things with my son had gotten as bad as they ever had so, I decided why not, couldn’t hurt to see what that lady in Missouri had to say. Turns out she was genuine after all, and I would not be disappointed. I couldn’t believe it. I could send Tyler to an 18-month program in Missouri – whoa, could it be? Tyler wasn’t convinced though, and I was again devastated. We had been given a miracle, a real honest to goodness miracle and he was going to turn it down. You can lead a horse to water, but you can’t make it drink!

Tyler OD’d several times in the coming weeks, was administered Narcan at least 3 times, stole every last remaining piece of jewelry I had that was worth anything, and was making me crazy. The drugs were in my house (although I could never find them), I was finding used needles. I tried to make him leave but he wouldn’t. I threatened him with the police. He didn’t care. The only reason, please understand for those already judging me, the only reason I kept him home was the carrot of the 18-month rehab program completely paid for by a random stranger who read our story. I knew there was help and if I could just somehow convince him to try. I knew if I kicked him out he would die, and I knew it would not be weeks or months, it would be days. But I had given up. He was arrested for being late to a court appearance and spent the night in jail. I called the police to file a report on my stolen jewelry which would send him back to prison. I made an appointment to talk to an officer, went to the station and waited – he had been called to the scene of an accident. A little voice told me to leave, ‘you’re not ready to do this,’ it said.

Tyler’s girlfriend, who has never used drugs, is a hard worker and has loved him through ALL of this, brought him home from jail the next morning. She knew I didn’t want him there, that I was done. But they came inside, and he said, ‘Mom, do even love me anymore?’ That completely broke my heart. We had a very painful conversation in the kitchen that evening, and he told his girlfriend and I we would have to decide for him what he needed to do because, clearly, he could not decide, and he would do whatever we suggested. He was ready. I told him I had 2 options for him as I saw it – get out, and figure it out on your own – or I call Sharon and we get him into the Teen Challenge program. He agreed right then and there to do it. I wasted no time in messaging Sharon who wasted no time in getting everything set up for us.

The next 27 days were the most jaw clenching, white knuckle days of my life. Tyler was sentenced to 20 days in jail, a judge who believed jail was a better option than rehab. I worried every single minute of every single day – he would have 20 days to change his mind and then what?! I booked his flight while he was in jail and then held my breath. Every hour was an hour he could change his mind, or an hour closer to him actually getting on that plane. We took Missouri off the table and set our sites on the Pacific NW so he would be a little closer to home. Alaska was presented as an option, and since Tyler has always wanted to live in Alaska, it gave him something to be really excited about. Five days ago we made it to the airport. I finally took a real breath when I heard from him later that day – he had actually boarded the plane and made it to Alaska where he will spend the next 12 months getting sober and finding his ‘new normal.’

I can’t begin to tell you how much Love What Matters and Sharon have meant to me. Love What Matters for posting my story and giving Tyler and I a voice, and Sharon Denice (Karraker) for not only making all this possible, but for never giving up on us, staying in touch and asking how we were almost daily for a couple of months, and for her support when I needed it the most! I gained a lifelong friend in the midst of all this. My son has a real shot at a sober life now because of kind, loving and generous people like Sharon and the doctor footing the bill. It truly is a miracle. For those who commented and sent messages on my first article – thank you does not even begin to cover how much your support, prayers and encouraging words meant to me. Never before have I felt that kind of support and love, and I believe your prayers were answered.

I can’t believe Tyler will be gone for a year – and my heart hurts but in such a good way. Hope is very powerful – hope and love…it can truly do anything. I miss you, my sweet son.”

This story was submitted to Love What Matters by Stacey Ladd of Cornelius, Oregon. Do you have child who suffers with addiction? We’d like to hear about your journey. Submit your story here, and subscribe to our best stories in our free newsletter here.

‘This typing… is Tyler. I am the junkie of our family. My mom and I were best friends. Then addiction struck.’