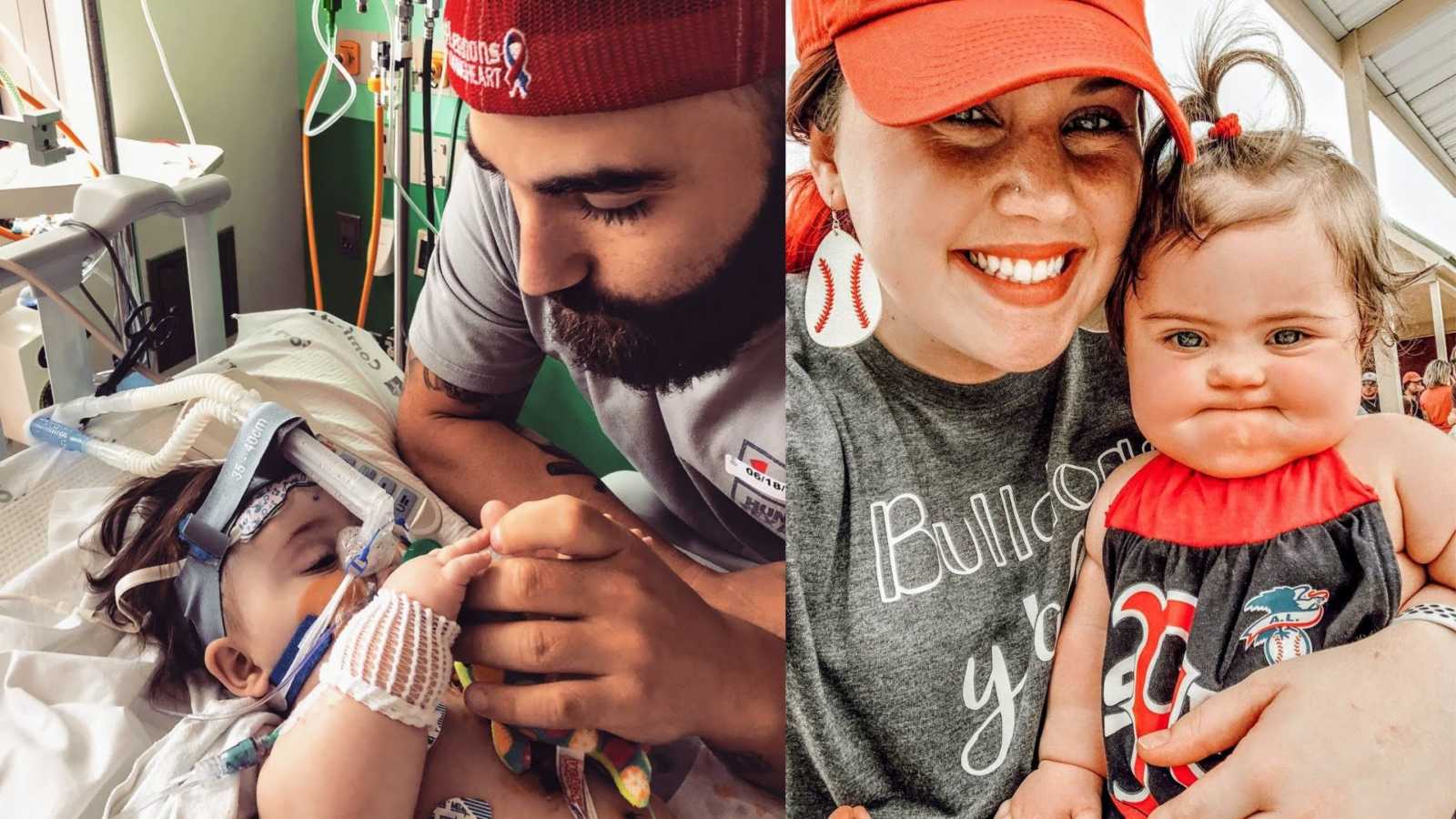 “I am Haley, Lennon’s mom. Lennon’s story started when I was about 20 weeks pregnant. Michael (Lennon’s dad) and I had gone in for our anatomy and gender scan. I remember both of us feeling so excited and telling ourselves we’d wait until the gender reveal party to find out what we were having and that there would be ‘NO peeking!’ We were both about to be brand new parents, and we were both anxious and excited for this ultrasound! Never in a million years did we think this ultrasound would leave us worried, after all lab work had come back saying ‘NORMAL.’

Oh ‘Normal’, a word that didn’t have much meaning to me before. I remember sitting there staring at the TV on the wall watching the tech take scans of Lennon as she danced all around in my belly. I remember seeing Lennon’s sweet face, hands and feet. In that moment, it had hit me. That was my baby; I was going to be a mommy! I was so excited! As the tech finished all the scans, she said it was time for the doctor to come in and discuss everything with us and that she’d bring back pictures and an envelope of the gender for us. Michael and I sat there and discussed what we saw, insisting it was definitely a girl, we knew it!!

The doctor came in and began talking to Michael and I about Lennon’s images and what he had seen. He said that her heart wasn’t ‘normal’ and he couldn’t really tell from the scans what defect she had, but that ‘the walls of her heart weren’t formed all the way.’ I remember trying so hard to be strong in that moment and not bust out in tears, but the tears just started and didn’t stop for days after that. As he continued talking about the heart, he said, ‘Sometimes this is a big marker for babies who have Down syndrome.’ I remember feeling like my brain had just turned to mush! Did he just tell me my baby has a heart defect and Down syndrome?! I immediately prayed and asked God, ‘why me? Why my baby?’

The doctor said he couldn’t confirm it, but we could do what they call an amniocentesis, and have it sent off for an analysis of Lennon’s genes which will confirm Down syndrome. So, we agreed to it. After the appointment, I remember walking to our car and feeling as if we were just told someone had died. I didn’t know what this feeling was, but suddenly I desperately wanted something I didn’t know I wanted before, a ‘normal,’ healthy baby!

I cried for days after that appointment as I waited on the results from the amniocentesis. I remember crying to my mom and telling her, ‘What if I’m embarrassed of my own child?’ Oh, how GOD works! I’ll always regret saying that. I mean my Lenny B is a little super star!

I was on the way home from work when I received the call from the doctor with the amniocentesis results. I remember him saying ‘she does have Down syndrome,’ and that he was ‘so sorry,’ and we were ‘welcomed to counseling to talk about what we wanted to do.’ I said ‘yes, we want to come learn more about her heart and Down syndrome and will be there tomorrow.’ As I had gotten home, I remember just falling into Michael’s arms bawling, saying repeatedly, ‘it’s not fair, it’s not fair! Our little girls’ heart is broken.’ I had prayed for mine to be broken instead! Looking back on the heartbreak and emotions I was feeling, I can’t help but laugh at what felt like a horrible nightmare, actually turned out to be the best thing that’s ever happened to us.

The rest of my pregnancy was a breeze for me, and Miss Lennon James Baccari made her appearance on December 13, 2017. She was the most beautiful thing we had ever seen! After birth, Lennon was taken straight to the NICU. We knew she would need surgery immediately, because she also had duodenal atresia that needed to be fixed before she could eat. We are lucky enough to live in Texas and have Texas Children’s Hospital (TCH) come pick Lennon and I up on their plane (the kangaroo crew) and fly us to Houston! WOW, this was a trip! I had just given birth less than 24 hours ago and here I was with a fresh new baby on a jet plane traveling 4 hours away by myself!

The next day Lennon had her first procedure at just 3 days old to correct her stomach. We spent a total of 6 weeks in the NICU, before Lennon came home with an NG tube. As Lennon grew bigger and stronger, her heart began to fail. At 6 months, they decided she would need her Open-Heart Surgery.

On June 6, 2018 Lennon went in for her first open heart surgery. She had a defect called, Complete Atrioventricular canal defect (CAVC), which means her heart had a big hole in the center causing the chambers to not work properly. Oxygenated and deoxygenated blood was mixing together causing the heart to work overtime. A child with AV canal defect breathes faster than normal and usually has trouble feeding. They also have high pressures occur in the blood vessels in the lungs because more blood than normal is being pumped there.

After her first OHS, she experienced some complications and 3 weeks later, they took her back to the OR for a second OHS. After that second open-heart, Lennon was doing amazing! She still has some regurgitation with her valves, but as she grows hopefully, it can fix itself. Lennon has spent a total of 11 weeks in the hospital for all her surgeries. She is still on medications that she takes everyday. In addition, she has a reflux of her ureter and urology will be watching that as she grows and it’ll probably require a procedure as some point down the road. 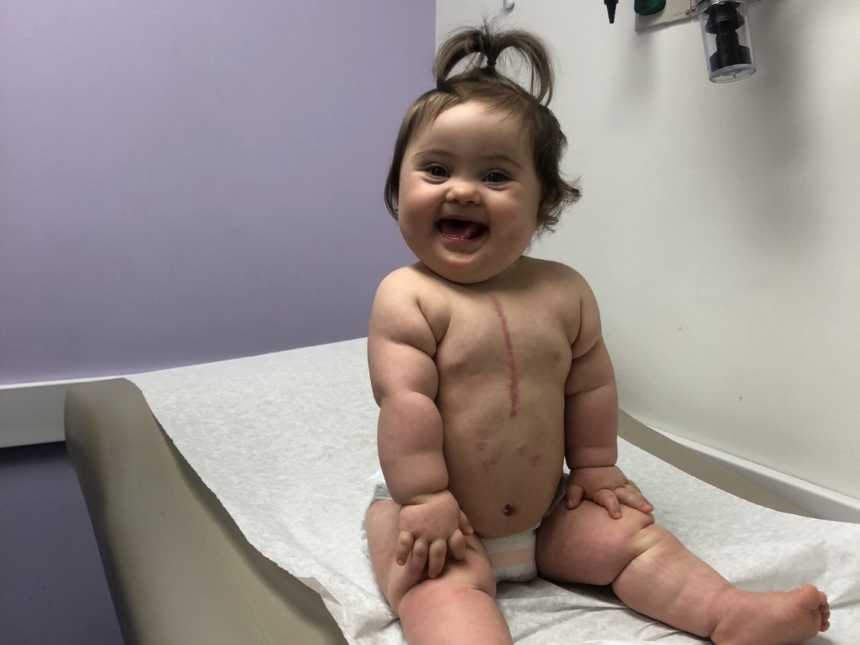 Lennon is a healthy, happy 14-month-old, who army crawls all over the house! She is the light of our lives and I don’t think any of us would know what to do without her. She is my hero and has filled my heart with so much joy and love. I’m so blessed to get to experience the world with her and share our story.”

This story was submitted to Love What Matters by Haley West of Texas. You can follow their journey on Instagram. Submit your own story here, and subscribe to our best stories in our free newsletter here.

‘She said they become ‘the pet of the school.’ The life I imagined crashed before me and fell to pieces. I heard the words, ‘She has characteristics of Down syndrome.’

‘I basically had twin girls with Down syndrome, one of whom had only been home a month, and now I was having twins! My whole world stopped. I looked at my husband in shock.’