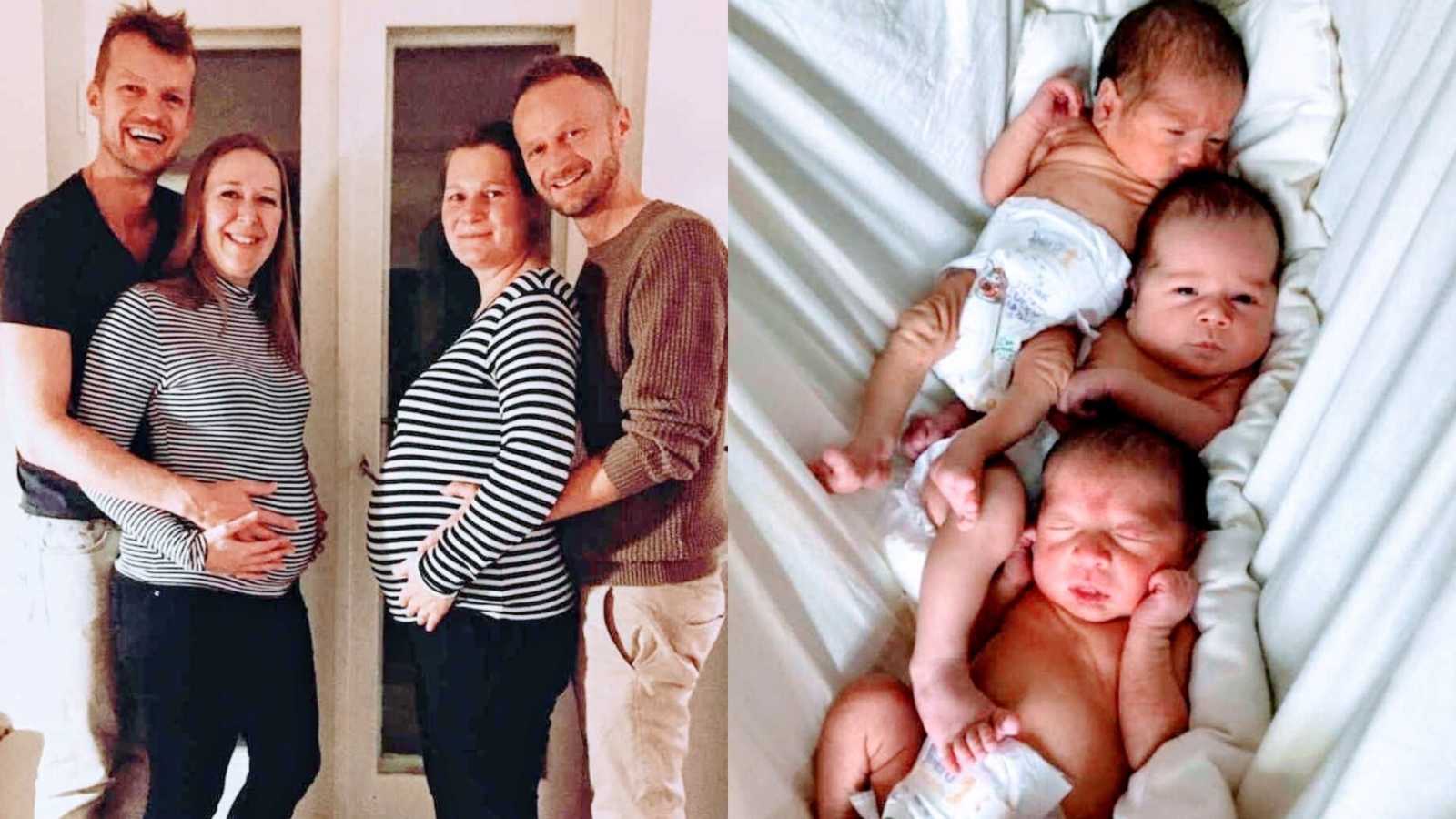 “Our triplet girls just turned 1 year old. Yes, triplets! Their story of coming into this world is a bit of a special one. They are born by two surrogates (Bjarke’s sister and a close friend) 2 weeks apart. Bjarke’s sister, Pia, offered a couple of years ago to carry a child for us – and not long after our close friend, Danielle, offered the same without knowing our plans with Bjarke’s sister. There we were in a situation where two women wanted to help us create the family we had always wanted. The funny thing is – we never asked them. They asked US. They had both considered it for a couple of years, without us knowing, before they finally asked us. I don’t think I could ever ask someone to do something like that for me.

Before they came into the picture as surrogates, we had not tried anything other than going to a meeting with an American surrogacy company to learn more about how it works and the costs involved. But the excessive costs involved and the idea of having a woman far away from Denmark carrying our child made us hesitant. We decided to go ahead with both of them and went to the U.S. for egg donation. They both had one egg transferred two weeks apart and in June of 2017, Pia became pregnant, and in July of 2017, Danielle got pregnant. In August of 2017, we discovered Danielle’s egg had split, so she was now pregnant with identical twins.

Danish National TV followed us with a camera through the whole process because they happened to have been making a documentary about our journey. We just recently saw the finished version before it is being broadcasted next month. In the documentary, in the moment at the ultrasound when we find out we are having three children, we first look really terrified, then shocked, then confused, then happy! My first comment was, ‘We need to hire some staff!’ I actually almost fainted, so the nurse had to bring me a glass of water before we could all even attend to Danielle, who now had realized she was carrying twins! She was super cool about it, though.

At that time, Lars and I talked a lot about how we were going to manage practically. Would we ever get any sleep? Would we both be able to work again at some point in the future? Would we survive??

In late January 2018, Anna was born and in early February 2018, Nora and Lily were born. We feel SO blessed by this enormous gift given to us by these two amazing women. What we love the most about fatherhood is the wonderful feeling of being a family and experiencing a kind of love that is beyond anything we have ever experienced before. Lars and I have been together for 18 years (married since 2007) and we have always had a strong love between us. Sharing the responsibility of raising our three girls has brought us even closer together. Both the birth of Anna and of the twins were mixed emotional experiences. When my sister gave birth to Anna, she was very ill with preeclampsia. When we first saw little Anna, I remember saying, ‘I have never seen anything this cute before!’ We both cried, but my attention was also on my sister, who was feeling so sick. When the twins came into this world, we were so excited and happy, but also emotionally overwhelmed having had a daughter just 2 weeks before. I remember being a bit scared of the enormous responsibility that comes with three children. At the same time, I remember saying, ‘I have never felt this happy in my entire life.’

Before our girls were born, my husband and I lived a life with a lot of freedom. We are both adventurous souls, so we traveled as much as possible. We would often take leave from our jobs to travel, and we have been around the world several times together. We would always go hiking and camping in the wilderness since we both love nature. Apart from traveling, we would spend a lot of time with family and friends and of course, our little doggy, Joey. The arrival of the girls has changed our life in a very fundamental way. I  (Bjarke) have now been a stay at home dad for almost 12 months, without doing anything but taking care of the girls. The funny thing is it feels so right just staying at home. I think we have fulfilled so many of our dreams before becoming parents so right now, we just want to spend as much time as possible with our girls. Since traveling has always been a big part of our lives, we really dream of showing the girls the world when they are old enough.

The girls are now in day-care throughout the week, which is a huge relief. On the weekends we have to make day trips because the girls get irritated if they don’t get any action throughout the day. We always go to visit friends or family – but only the ones who don’t mind the war zone we leave behind after having occupied their house for only a couple of hours! Sometimes we go to the public swimming pool because they all absolutely love being in the water. I have learned how important it is to be present and in the moment. Kids need you right that second! I used to think about work a lot, even when I had time off, but now I have to push it aside when I’m with the kids because they need my attention. The funny thing is it feels great to prioritize and remember work isn’t always that important after all. I have learned there is something here that is so much more important – and in a way, it sets me free.

There have been no serious doubts on our path to fatherhood. There has only been a couple of times where it has been so hard taking care of three infants at the same time we almost collapsed. Somehow, we always find the strength to work through the rough patches. For example, in August of 2018, when the girls were just 6 months old, Lars had to go back to work full time. This basically left me alone with the kids in the day time. I got a lot of help from friends and family, but even with that help I had the main responsibility and was running around day and night with one girl strapped to my back, one on my stomach, and the last one on my arm. At that time they got really irritated when they were lying down so I had to carry them… all of them. We had a really hot summer here in Denmark, with most days above 86 degrees Fahrenheit, so it was a pretty crazy experience running around with three babies, being so hot I almost fainted. My only relief was when we were driving because that would always bring the girls to sleep. Whenever I could get someone to drive our car, we would all get in, turn the AC on high, and just drive around for hours while the girls and I slept. These hard times have brought us even closer together because this is where we really had to rely on each other.

In Danish law, a woman has to wait 2 and a half years until she can give away her child for adoption. This means my sister and our friend are still technically considered the biological mothers for the children, even though we had egg donation. Danish law considers the woman who gives birth as the legal mother. This means I legally only have two children, because I’m the biological father to the twins, and Lars legally only has one child since he is the biological father of Anna. We both have full custody, though, so in everyday life, this doesn’t affect us. When the girls are 2 and a half years old, I will officially adopt Anna and Lars will adopt the twins. Other than that, we have not been treated differently. We have only been met by love and open arms from everyone who has heard our story. To us, the adoption is a pretty formal paperwork-thing because, in our experience, we both have three children already, and we don’t plan on making a big thing out of it.

A couple of years down the road, I see us living in a nice house in a smaller village close to nature. Right now, we are living in the city of Copenhagen, but we really don’t want our kids to grow up in the city. We want them to grow up feeling comfortable with nature. I see us not working as much as we used to so we have more time for the family and to travel with the kids.

We both feel unbelievably blessed having such amazing people in our lives. We are surrounded by love, and without these two women helping us create the family we’d always wanted, we probably wouldn’t have any children today. At the time they offered, we basically had given up hope. Our babies really are a miracle!”

This story was submitted to Love What Matters by Bjarke Damm and Lars Hansen of Denmark. You can follow their journey on Instagram. Do you have a similar experience? We’d like to hear your important journey. Submit your own story here, and subscribe to our best stories in our free newsletter here.

‘Nervously, we asked what was happening. ‘Are you sitting down? The birth mother is having twins.’ Our tears of joy were replaced with complete shock.’: Gay dads welcome ‘beautiful and healthy twins’ after adoption journey 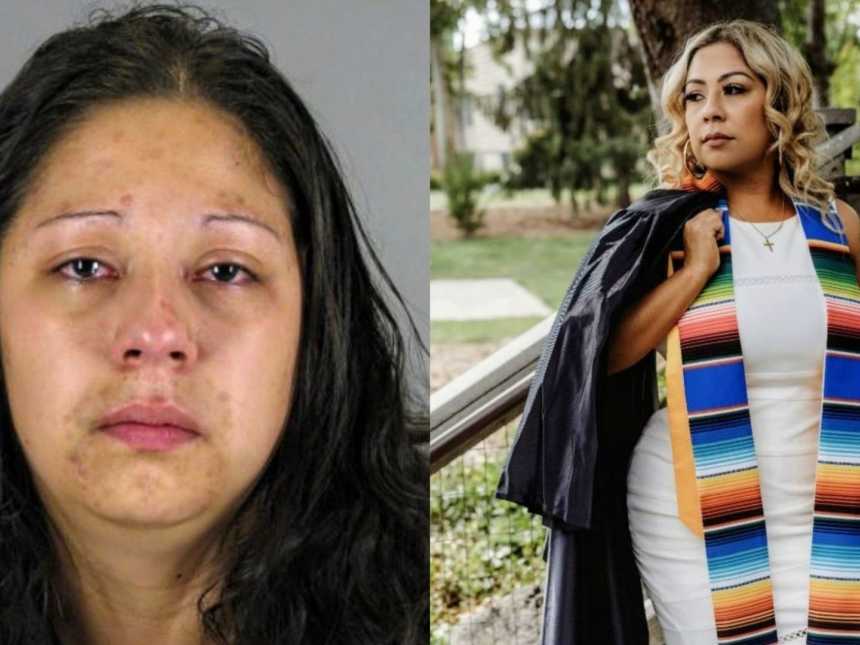