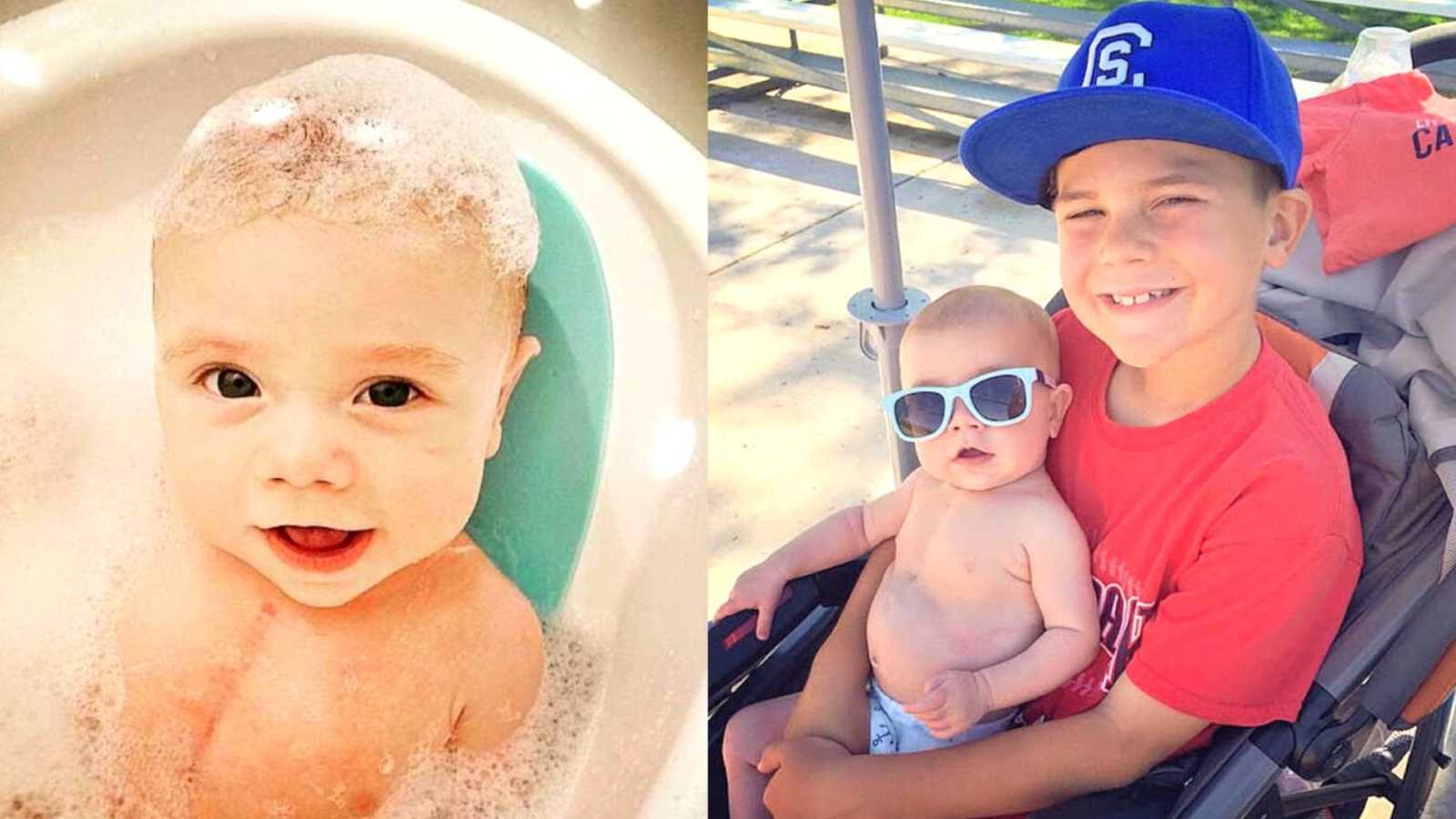 Disclaimer: This story contains details of child loss and may be triggering to some.

“At our 20-week ultrasound, on June 17, 2014, we found out our son Lawson had a heart defect known as Hypoplastic Left Heart Syndrome, which meant he only had half of a heart. He had an 85% chance of making it to term, and if he did he would need a series of open-heart surgeries in order to live. The first of which would take place during his first week of life, the second at about 4-6 months old, and the third somewhere around age three. I was induced on October 28, 2014, at around 1 p.m. Labor came and went. We watched the World Series while waiting for our little one to come. I had a calm peace about the whole thing. All I kept thinking about was how I wouldn’t be allowed to touch him when he was born, because they would have to take him right away.

The time came and the room filled with so many people—doctors, nurses, specialists. Lawson Ryan Fien was born on October 29, 2015, at 7:47 p.m., weighing in at 6 pounds, 4 ounces, and 21 1/4 inches long. The second he was born, they placed him on my chest! I was so surprised and thanked GOD for this moment, and then they whisked him away. But those few moments will be something I’ll never forget. He was as perfect as he could be. He was born at Kaiser Sunset, in Los Angeles. He would stay there only a few days before being transported over to Children’s Hospital Los Angeles, where he would have his first open-heart surgery and remain for his recovery, which on average was 40 days. Ryan and I would stay in the hospital and the Ronald McDonald House Los Angeles during this time, while our three older boys were back home and being cared for by our family.

On November 4, 2014, at just six days old, Lawson underwent his first open-heart surgery. He was recovering well when it was discovered he needed additional surgery to repair one of his lungs. It had gone into shock during the open-heart surgery and needed to be repaired. On November 25, 2014, Lawson underwent another surgery called a Diaphragm plication. They tacked down his diaphragm in order to allow his left lung to fully expand. Finding out Lawson needed another surgery was hard to take. He was so tiny and had already open-heart surgery, now this?? We were told it would be a simple and quick surgery. Surgery went as expected, but when he returned I saw this incision was huge and I lost it. My poor baby had been through so much. I knew he needed to be saved, but I felt helpless. I couldn’t save him from all the pain and suffering. The doctors and nurses tried to convince me it looked worse than it was, but a mother knows when her baby hurts.

December 5, 2015, was the day Lawson came home. Leaving the comforts and constant care of the hospital was scary. I knew at any moment his heart could literally stop and there wouldn’t be anything I could do… and I may not even know. We rejoiced in the fact we were all home together for the first time, and it was amazing. Our routine with him was very detailed, as he was so delicate, and we knew his condition could go from great to critical in a split second. The doctors told us, ‘The time between his first and second open-heart surgeries are the most delicate.’ We just needed to ‘Get him to the Glenn,’ which was the name of the second OHS. His next surgery was scheduled for his half birthday, on April 29, 2015. We were so excited they thought he was doing well enough that he could wait until the six-month marker. All his echoes were always great. His cath procedure went perfectly. He never had a bad checkup. He had a strict schedule of medicines and monitoring. I took care of every single detail and met every need he had. They were my best moments as a mom.

April 28, 2015, we checked into the Ronald McDonald House for another stay. We were told this one should only be 4-7 days, as the recovery from this surgery wasn’t nearly as long or hard on the babies. We went over to CHLA for Lawson’s pre-op, and when he got an A+ and was all set for surgery in the morning, we headed out into the city for a fun day with our little warrior. I always knew in the back of my mind he was sick…very, very sick. But I always had hope. I wasn’t ever jealous of other parents, as I had healthy children too, and was blessed by all my kids for different reasons. I knew God chose me to be Lawson’s mom for a reason, and I was so grateful everyday He did. We went up to the Observatory, had lunch, looked out over the city, and thanked God He had kept Lawson healthy for his procedure. The doctors had said, ‘This surgery will make him bulletproof.’ Later that night, we drove around the city so he could sleep, went back to the Ronald McDonald House, gave him a bath, and put him to bed. Didn’t sleep much that night, as I was so ready for the surgery which would make him ‘bulletproof,’ as we were told. I was ready to give him this gift of time and life.

April 29, 2015, we were up before the sun and checked in over at CHLA for his surgery. We waited for hours. The hospital staff told us multiple times, ‘Lawson’s surgery is going to be pushed back because of other more emergent cases, and not enough space.’ I prayed to God, ‘Please do what needs to be done to get my baby the surgery, so he will be healthy enough to live a full life for many years to come.’ I wanted nothing more than to give him all of the life he fought every day to have. Finally, after hours and hours, we were called back, and it was his turn. Just as I handed him off to the nurse, he began to cry, and right before we watched them walk him back to the operating room, we locked eyes. I had no idea it would be the last time I would ever see those beautiful blue eyes again. Hours passed, and we were told the surgery went great. They were able to make all of the repairs needed and he was recovering well. We could see him soon. We went back to see him shortly after and I didn’t leave his side. We were told he would be asleep for many more hours as the anesthesia wore off.

A little after midnight, I awoke to the sound of chaos in the room. The nurse had just done a routine check of his pupils and noticed they were uneven, which was an immediate cause of great concern. He was rushed back for a CT, and we were told he had suffered a massive stroke, to the point of no return, which damaged 2/3 of his brain. The damage was increasing rapidly. There was nothing they could do for him. It was all a whirlwind. One minute, they’re telling us they can do surgery to help the brain swelling, and the next second it was too late and wouldn’t work. I was in literal shock. How was this happening? At one point they lost him…CHAOS ensued again and we had to leave.

I was sitting in a chair, just rocking back and forth, with my hand over my face, sobbing and pleading with God: ‘PLEASE GOD, DON’T TAKE MY BABY, PLEASE GOD DON’T TAKE MY BABY!’ One of the nurses there rubbed my back. She kept saying, ‘It’s okay, Momma. It’s okay.’ I heard them say push whatever (some amount) of EPI, and I knew they were trying to save his life. I ran into the room and asked the nurse, ‘IS MY BABY DYING!?!?!’ She just looked at me and didn’t say anything. I said, ‘PLEASE JUST TELL ME. IS MY BABY DYING?!’ She said softy, ‘Yes, I think he’s dying.’ By the grace of God, they were able to stabilize him and give us more time. But he was still gone and would never wake again. At 4:32 p.m. on April 30, 2015, our precious Lawson Ryan went to be with Jesus, and part of me went with him.

Allow yourself grace and grief. FEEL everything, and don’t be ashamed for feeling any way you do. It’s okay to have good days and bad days. Time won’t heal the pain, but you’ll learn how to manage it. Grief will also sneak up on you. That’s okay, too. Losing a child is literally the worse thing someone can go through. Nothing on earth can top the pain, so take care of yourself and let go of anything or anyone who doesn’t help you navigate this new, painful, confusing, and never-ending life of loss. You will smile again, laugh again, and continue to love. Live the rest of your life for your child who couldn’t live theirs. Honor them. Say their name. Do good for them. Do right by them. They are forever yours. And remember, saying his name and talking about him won’t remind me he died. It will remind me he lived.”

This story was submitted to Love What Matters by Meghan Fien. You can follow her journey on Instagram. Submit your own story here, and be sure to subscribe to our free email newsletter for our best stories, and YouTube for our best videos.

‘You can choose comfort care or surgery.’ I wanted to scream. I didn’t know what quality of life he’d have.’: Mom loses baby with Hypoplastic Left Heart Syndrome, ‘He only knew love’

‘If it comes to a decision, choose our baby.’ Tears streamed down her face. ‘If this ruptures, it will kill your wife and baby.’: Dad in awe after mom births miracle baby with Congenital Heart Disease

‘But the other children are doing well!’ I’d go anywhere for him. ‘Someone must have a solution!’: Mom loses son to heart defect, starts retreat for other child loss moms, ‘It’s our way forward’