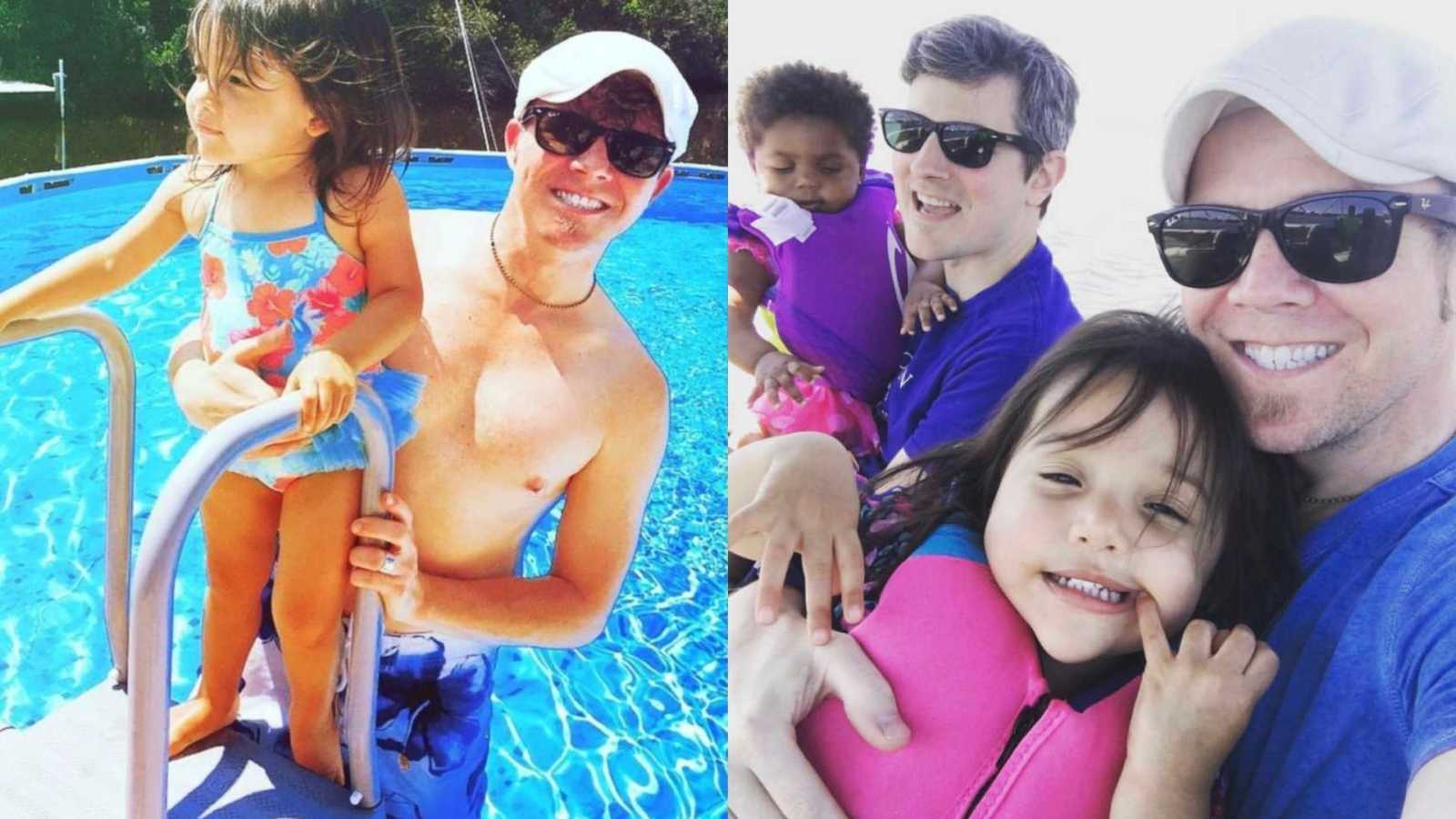 “My husband Douglas and I had many long discussions that led to our decision to pursue an open adoption. There are several reasons this was the right choice for our family.

Many factors came into why we chose an open adoption. Adoption is a long process and not a single, clean event. We went into it with the expectation the process had the potential to be difficult for both the birth mother and for us. I can’t even begin to imagine what it must have been like for her to make the decision to place her child for adoption. And then after all the emotions and challenges of pregnancy and the pain of childbirth, entrusting the care of that precious little baby to two men whom she just recently met.

After the first year, the visits slowed as we didn’t want to cause confusion as our daughter grew. As time went by we knew the moment would come when we needed to talk about our daughter’s origins with her. For two dads it is pretty obvious their child was either adopted or was born through surrogacy. Needless to say, mothers are pretty ubiquitous in pop culture, bedtime stories, and the world in general. As such, we were afraid not having a mother figure in her life could be pretty confusing, so we knew from the beginning we wanted to be truthful and transparent with her.

Our girls both go to nursery school weekly. They are able to see ‘mommies’ come to pick their children up everyday. We figured that would eventually prompt questions. A couple of weeks ago, it did. After bedtime stories, we said our prayers as usual. After prayers, she usually asks us to tell her about Disney World (she loves to hear about Disney World).

However, this particular night she didn’t ask about Disney, rather, she asked Daddy (Douglas) to talk about his mother.

We both looked at each other as this was pretty random. At her request, he started to tell her a story about his mother. After the story she said, ‘I don’t have a mother.’ Immediately we both cut in and said, ‘baby, everyone has a mother.’ Surprised, she asked us to tell her about her birth mother. I don’t know what shocked us more–the question, or the fact she used the word ‘birth mother’ when she asked. We have several adoption-themed books mixed into our bedtime story collection. It’s pretty amazing how much the adoption stories helped to introduce a complicated subject (after all, she’s only 3 1/2) but also helped break the ice to open up dialogue.

‘Well, baby girl, when you were born, your birth mother searched all over for a daddy and a papa who would love you with all of their hearts and would take very good care of you. After searching everywhere, our telephone rang. Do you know who it was?’

She answered, ‘Was it my birth mother?’

‘Yes it was! And she asked us if WE could be your daddy and papa!’

In reality it was much more complicated than that, but she seemed to be assured by hearing this. She inhaled quickly and smiled from ear to ear. I had a knot in my throat fighting back tears. She really understood! We both were amazed.

For the next few nights she continued to ask for stories about my mother and Douglas’s mothers in lieu of hearing about Disney. Douglas has two mothers that are both very involved in our lives. So, with 3 mothers between us we don’t run out of stories to tell her! A few more days went by and we figured we had finished that conversation until she asked the heaviest question of all: ‘Who is my birth mother?’ We looked at each other and quickly changed the subject.

The next night I was sure she would ask again–our girl is very persistent. Sure enough, as soon as we finished her prayers she asked, ‘who is my birth mother?’ Our daughter has a rainbow nightlight in her room that was given to her by her birth mother. It shines in her room every night and she loves it so much. I was very eager to tell her it came from someone very special. As the light changed from color to color I pointed to it and asked, ‘Do you remember who gave you your rainbow nightlight?’ She shook her head no. ‘Well baby girl, your birth mother did.’ We then told Alli Mae her birth mother’s name. As soon as we told her, she knew exactly who we were talking about.

We figured the next step was to have her birth mother over for dinner. Alli Mae is very inquisitive and we knew she would have some questions. She isn’t very shy, so after a few minutes of acclimating to the situation I knew if she was curious about something, she would ask.

We wanted this to feel natural. We wanted it to be an organic and meaningful meeting. We didn’t want anything to feel forced. Usually when you have to force something, then it feels awkward and afterwards you second guess yourself asking if it was the right decision in the first place. We thought having her birth mother over for dinner would feel as natural as you could get. When her birth mother first arrived, Alli Mae kept her distance at first. Douglas and I were cooking in the kitchen visiting with Alli Mae’s birth mother while Alli Mae stayed in the living room. About 30 minutes into the visit I went to check on her to see if she was okay. When I did she looked at me and just like a 12-year-old girl, she told me to ask her birth mother to come into the living room. (This time, she said her name instead of saying ‘birth mother’). The question was so direct and to the point… I was completely shocked! She’s 3! At her request I walked back into the kitchen and told her birth mother her presence was being requested in the living room.

‘You are?’ Alli Mae asked. ‘Do you want to go play with my toys, birth mother?’ And just like that, the ice was broken. The secret was out. There was no awkwardness. It all felt very natural – like it was supposed to happen – just like that.

It felt like a bag of bricks lifted off of us. That was a very heavy situation that was handled with such grace by everyone involved. I am left speechless at how our daughter was able to comprehend such a serious topic. It leaves me feeling so hopeful about how we can face any other subjects as she grows older.

Children are amazing little humans. Don’t for one second underestimate their amazing capacity to comprehend seemingly complicated concepts. It comes from such a uniquely innocent place. It makes me tear up just thinking about it. If only we as adults could comprehend and interpret tough subjects like that.”

This story was submitted to Love What Matters by Erik Alexander of New Orleans. Follow him on Instagram here, Facebook here and his blog here. Submit your own story here, and subscribe to our best stories in our free newsletter here.