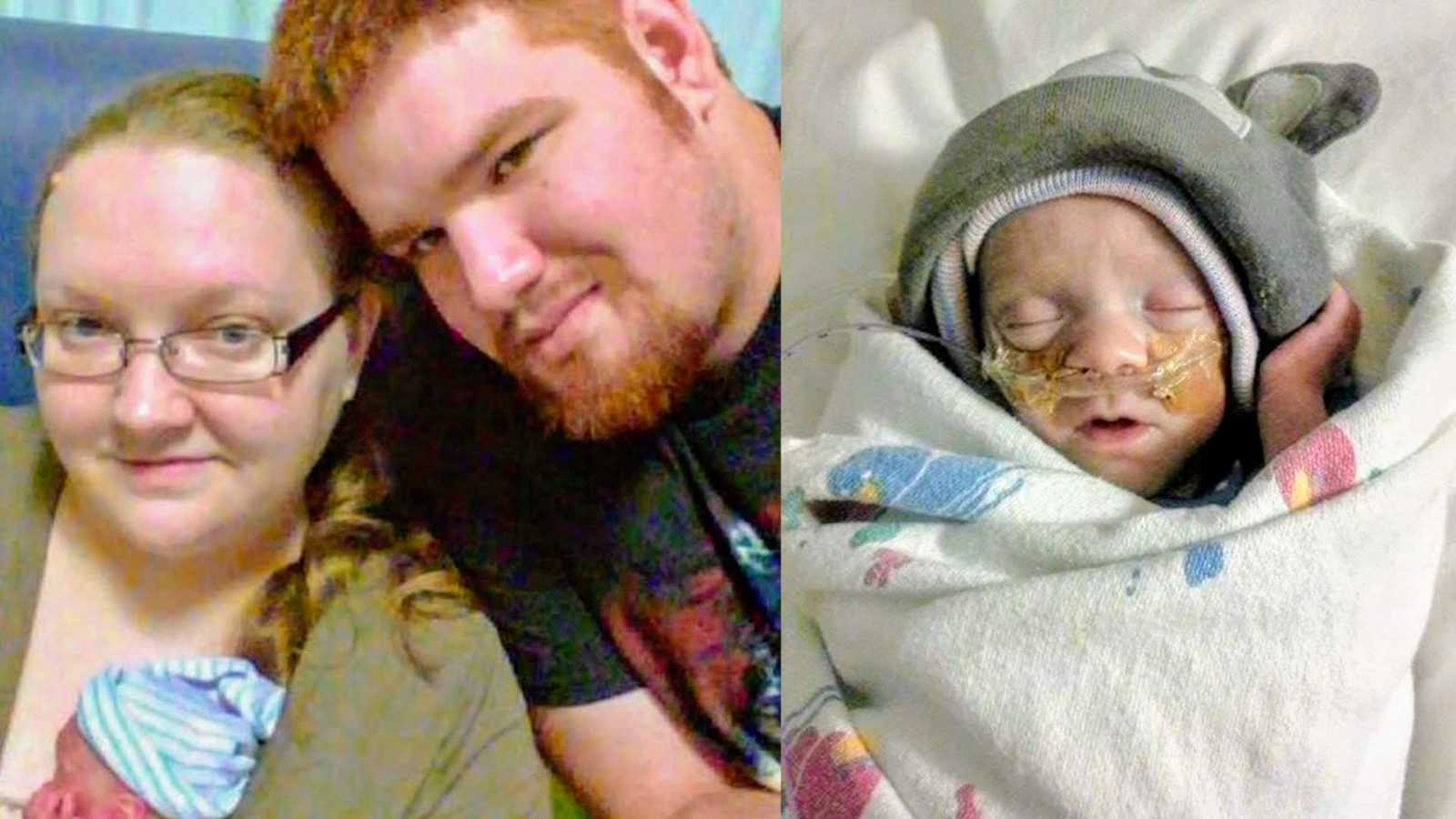 “I found out I was pregnant with my son way too early in my relationship with his father. I remember going home on my lunch break with that positive test in my pocket, terrified to hand it over to him but knowing that I had to. What were we going to do? Could we handle this?

I’ve never had good pregnancies. My first ended in an emergency cesarean due to preeclampsia. It came on at 28 weeks, but I made it to 37 weeks on bed rest before it became severe. My second was a still birth at 21 weeks, my third a miscarriage at 12. So, I was cautious. Jaded, you could say. But I wanted this baby so badly. When we forgot to be scared, we let ourselves be hopeful.

At 12 weeks, we saw the heartbeat on ultrasound and breathed a sigh of relief. Also, that week, my testing came back indicating the baby had a very slight chance of having Down Syndrome. As a precaution, my OB set me up with a maternal fetal specialist to do a better ultrasound and DNA testing. The day we saw the MFM, we found out we were having a very healthy baby boy! We were excited to be cleared and to find out we were expecting a son. The MFM asked to see me again at 24 weeks and sent me on my way. I was 18 weeks.

Around this time, I started to feel ‘off’. Sometimes I convinced myself I was crazy, anxious, or scared. But I just didn’t feel well. At my 20-week visit, I mentioned it to my OB. I even told her I thought I could feel preeclampsia coming. She insisted I was just anxious. After all, 20 weeks is too early. My blood pressure was slightly elevated at that visit. Again, it was my anxiety. Right?

I stuck it out until my next visit with the MFM. When they checked my blood pressure that day, it was nearly 200/100. The ultrasound also showed blood in my son’s stomach and my placenta didn’t look good. He was measuring 2 weeks behind in growth. She immediately put me on hospital bed rest and told me to prepare to spend the rest of my pregnancy, potentially 4 months, there.

The first night, NICU came to see us. They explained survival percentages based on gestation and also some of the common issues faced by premature babies. They tossed around terms like brain bleed, cerebral palsy, and necrotizing enterocolitis. We were told our baby’s chances of survival were between 10 and 15 percent if he was born that night. And he’d likely come out with long term issues. I didn’t even wait until they left to burst into tears. All I could do was pray that my blood pressure went down and my placenta hung in there.

Neither of those things happened. By Friday morning, I’d spent the night with uncontrolled blood pressure and a baby whose heart was consistently decelerating. My doctor came to perform the scheduled ultrasound. I had one every 2 days. Thirty seconds in, she told me she was taking me to the operating room. The blood flow in my son’s cord had reversed, meaning he’d never get nourishment from it again. It would be a waiting game for his heart to stop.

My partner Arick was at work an hour and a half away. I made frantic phone calls while being prepped for my caesarean. He walked into the OR just 3 minutes after his son was born. He was in the next room being intubated. Avery Elijah was born at 10:13 on October 25th, Arick’s birthday, weighing a whole pound and three ounces. 540 grams. 11.4 inches long.

He didn’t look human. He was red, and you could see though his skin. His eyes were still fused shut. The first time I saw him, I cried the entire trip back to my room. Arick got me through those first days. He fed me, helped me walk, took me to see our son, helped me pump. He delivered the first milliliter of breast milk we got to the NICU as proud as a new father could be.

Avery had heart surgery at 19 days old. The night before, we watched him stop breathing right in front of us. He spent 5 weeks on the ventilator, 4 on CPAP, and then went onto nasal oxygen. He got a few tummy infections and struggled to stay healthy enough to eat. When he took his first bottle, it was like he was born for it! He ate so well that 6 weeks later he was ready to come home.

He came home on a monitor for his oxygen level and on .25 liter of oxygen. We were terrified! The scariest thing was living with the words of the neonatologist reverberating in the back of our minds. We were constantly looking for problems.

When he wasn’t sitting up at a year old, we knew we’d found a problem. Even accounting for his prematurity didn’t excuse the fact that he was still essentially a newborn. A month later, he was diagnosed with cerebral palsy. Four months after that, a rare brain malformation. A brain malformation that he was born with and that he’d have been born with if he came at 40 weeks. The irony.

Avery is 5 now. His diagnosis list is as long as his little arm, and that’s fine. Because our lives are so much richer with him in them. He’s taught us patience, humility, and how to laugh through our tears. He can’t run like other 5-year old’s, but he knows the phases of the moon and can count to 100. He doesn’t talk as well as the other kids, but he can deliver a joke with humor beyond his years. He spends lots of time at the doctor, hospital and therapy but he has never complained about it.

Avery has taught me that special kids aren’t reserved for special parents. Sometimes they’re given to regular old people. People who can’t handle it sometimes. People who sometimes don’t know what they’re going to do. People like me and Arick.”

This story was submitted to Love What Matters by Stephanie Wedgeworth. Submit your own story here, and be sure to subscribe to our best stories in our free newsletter here.

‘She couldn’t stop looking over to where her brother would have been, had he survived. I couldn’t help but feel he was lying there, letting her know he was present, and will always be with her.’

‘I blacked out and collapsed. ‘We’re taking your baby,’ I heard someone say. I woke up not knowing where I was. I tried to tell them I was in pain, but couldn’t talk.’

Do you know someone who could benefit from this? SHARE this story on Facebook with friends and family.