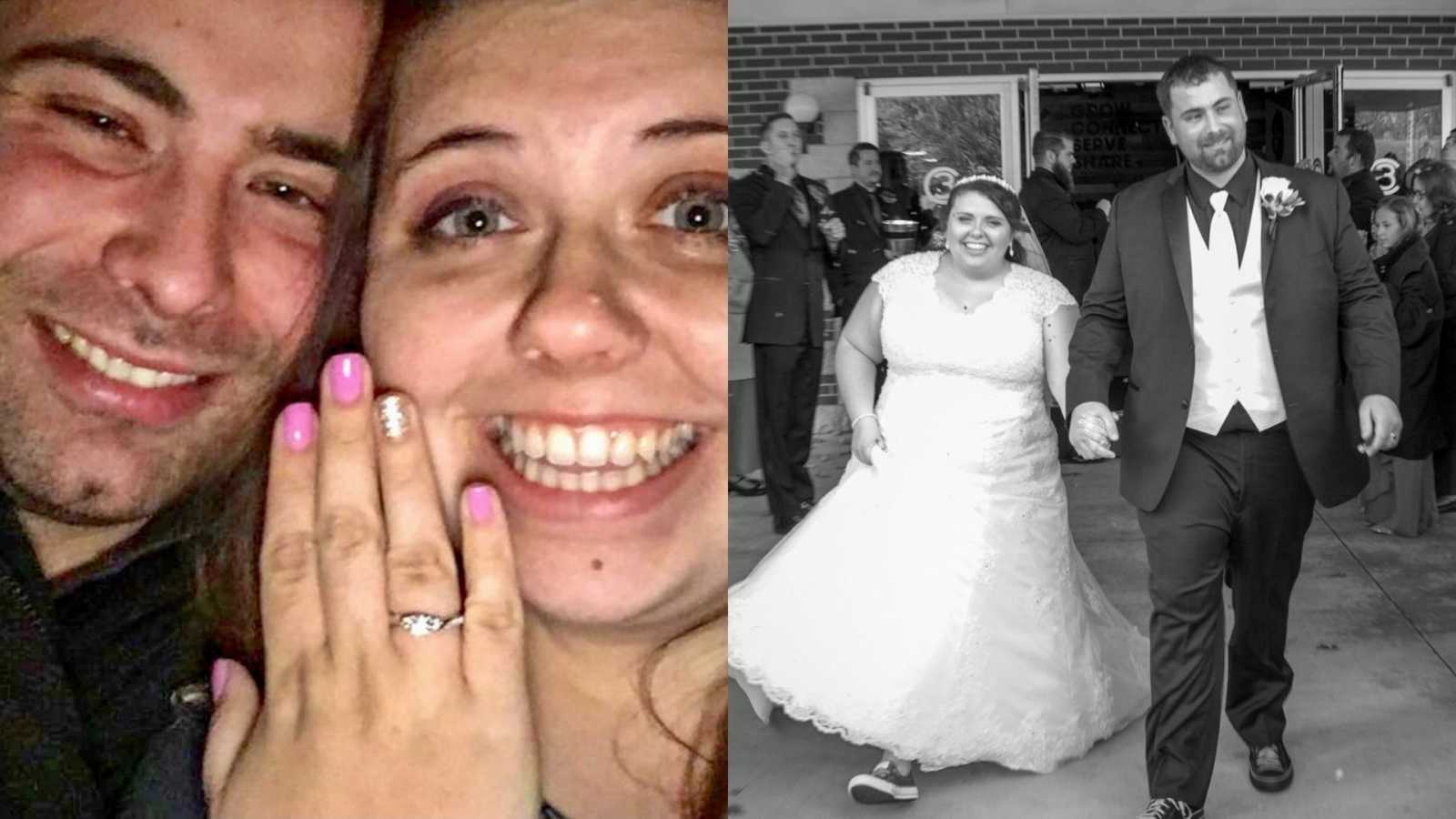 Disclaimer: This story contains details of suicide that may be triggering to some.

“In the fall of 2017, I met the most amazing man. He was smart, kind, funny, handsome, and sweet. We started dating and became an official couple on Christmas Eve! Within a month, we were in love and spending all of our free time together. We were adorable and definitely one of those couples you see and think, ‘Okay we get it, you love each other…now calm down.’ Shortly after, Alex asked me to marry him and I, of course, said yes! We had prayed a lot about our future together and both felt this was a good step. We started planning a November wedding.

Our engagement was magical. We were able to do so much together in those nine months leading up to the wedding. We went to four weddings, went on many adventures around Indiana, started turning the old house I bought into a home, spent lots of time with our families, and served for two weeks at church camp. I am a children’s minister by profession and Alex was such an amazing ministry partner. I had always prayed if I was to get married, the man would want to serve alongside me and be okay with my crazy ministry life. My prayers had been answered in this soft spoken, yet strong man who loved God and His people so much.

As our wedding approached, I saw more stress on Alex’s face. I attributed it to pre-wedding pressure, life changes, and not loving his job. He was working for a soybean company at the time (a job he had taken in order to be closer to me), but his passion was immuno-oncology research. A couple of weeks before the wedding, he was offered a job with a previous boss in California as a research scientist. We began the process of telling our friends and family we would be moving across the country exactly one month after our wedding.

Our wedding was beautiful. We were surrounded by so many people we love, and we wrote such personal and perfect vows. The ministers who married us made the ceremony just for us. We were so happy and in love. A month later, we packed up and moved to California to start a new adventure together. I did not have a job yet, but as soon as we landed, I dropped Alex off for his first day in the lab. So, there I sat, alone in our apartment, for nearly two months. This took a huge toll on me, but I could see the move was taking an even bigger toll on Alex. The stress on his face only grew. The stress turned to fear. And the fear turned to extreme anxiety. He started to worry about everything and everyone. He never felt safe or at ease, not even with me.

I eventually found a ministry position and began to build community with a new team. The ministry partner I had prayed for started to stay home on Sunday mornings. He would wake up feeling sick and not want to go with me. When he did go, he was a nervous wreck by the time we got back to the apartment. By this point, we were going to weekly counseling sessions, but nothing was helping. Much of the man I fell in love with was gone. I would get glimpses of him from time to time, but the man I lived with was not my Alex. Eventually, he was referred to a psychiatrist. She tried him on several different anxiety medications, but nothing seemed to help, because as his anxiety grew, his drinking habit also grew. He was trying to numb the pain and quiet the voice in his head telling him something was always wrong.

We had lived in California for about a year when things really started to decline quickly. He stopped eating. He was tired all the time but could not sleep. He would call me 15 times in a row and have no recollection of our conversation. His drinking continued to increase. He blamed me for everything all of the time. I was scared and ashamed of the life we were living. What if the members of the church knew what was happening at home? What if my friends heard the way he was talking to me? What if my family saw the rage in my eyes after being accused of things I had not done for the tenth time that day? I kept most of our life hidden. I posted cute pictures if we ever took any. I made up excuses for why we literally never went anywhere. I glossed over some of the major issues in counseling to avoid fighting at home.

We were scheduled to go home for Christmas, but he woke up that morning and told me he was not going, but I should still go. He was not feeling well, so he wanted to rest up before traveling. I do not know what happened while I was in Indiana, but he did not sound like himself when we talked on the phone every day. I tried to be honest with our families about what was really happening with him. This was met with support by most, but others did not believe me and questioned my loyalty to Alex. I vowed to be with him through sickness and health. He was sick—I was never going to break that vow.

I landed in California ten days later (Alex never ended up flying home for Christmas). I took a Lyft back to our apartment, because he was not in a state to drive. We had a decent day, filled with honest conversations about his mental and physical health. He admitted he needed help. The next night, I decided to pour out the alcohol in the apartment while he slept. I got about halfway through the bottle and became nervous about how he would react. So, I went to bed. In the night he woke me up to tell me he had some sort of plan for getting better. I told him his psychiatrist had an established plan for him, but ultimately, he was going to do what he wanted, just like always.

At 6 a.m., he got up to get a glass of water. I do not know what he actually drank, but when he came back into the bedroom, I heard him opening the safe. I asked what he was doing, to which he responded that he was getting his work laptop. This was a plausible explanation, as it was almost time for us to start getting ready for work. I accepted this answer and laid my head back down. The next thing I knew, I heard a loud noise, which I thought was Alex falling. I sat up to see the safe on the floor and then I smelled the smoke and saw Alex’s lifeless body lying next to me on the bed. I knew he was gone. I knew my life would never be the same. The man I loved and was trying to build a life with was gone in an instant.

The next few days and weeks were a blur as I moved back to Indiana, attended a celebration of life for my 28-year-old husband, and learned how to live with half of my heart gone. In the midst of the hardest moments of my marriage, I had begged God for even a glimmer of hope. I now have the hope Alex’s mind is healed, and he is resting with the Savior. Alex loved Jesus and he loved me. We ran out of time before his sickness took him away.

I now have the task of rebuilding my life. This year has been painful and unimaginable, but God has been so faithful. With thousands of people praying for my heart, counseling, stellar family and friends, I have survived. I know God is using our story to reach others. I pray He continues to bring good out of such chaos. I pray others will have the courage to be honest and talk about hard things. I pray no one feels alone in their desperation. I pray those who are grieving can have hope in an eternal future.”

This story was submitted to Love What Matters by Megan Horvath. Submit your own story here, and be sure to subscribe to our free email newsletter for our best stories, and YouTube for our best videos.

‘I just want to run my car into the wall.’ He became short with us. Our arguments were violent. I tried so hard to reach him.’: Mom of 4 loses husband to suicide, ‘I choose love over bitterness’

‘My husband called me at work. I went completely numb. I remember saying, ‘I love you, brother.’: Woman loses brother to suicide, ‘He had such a pure heart’