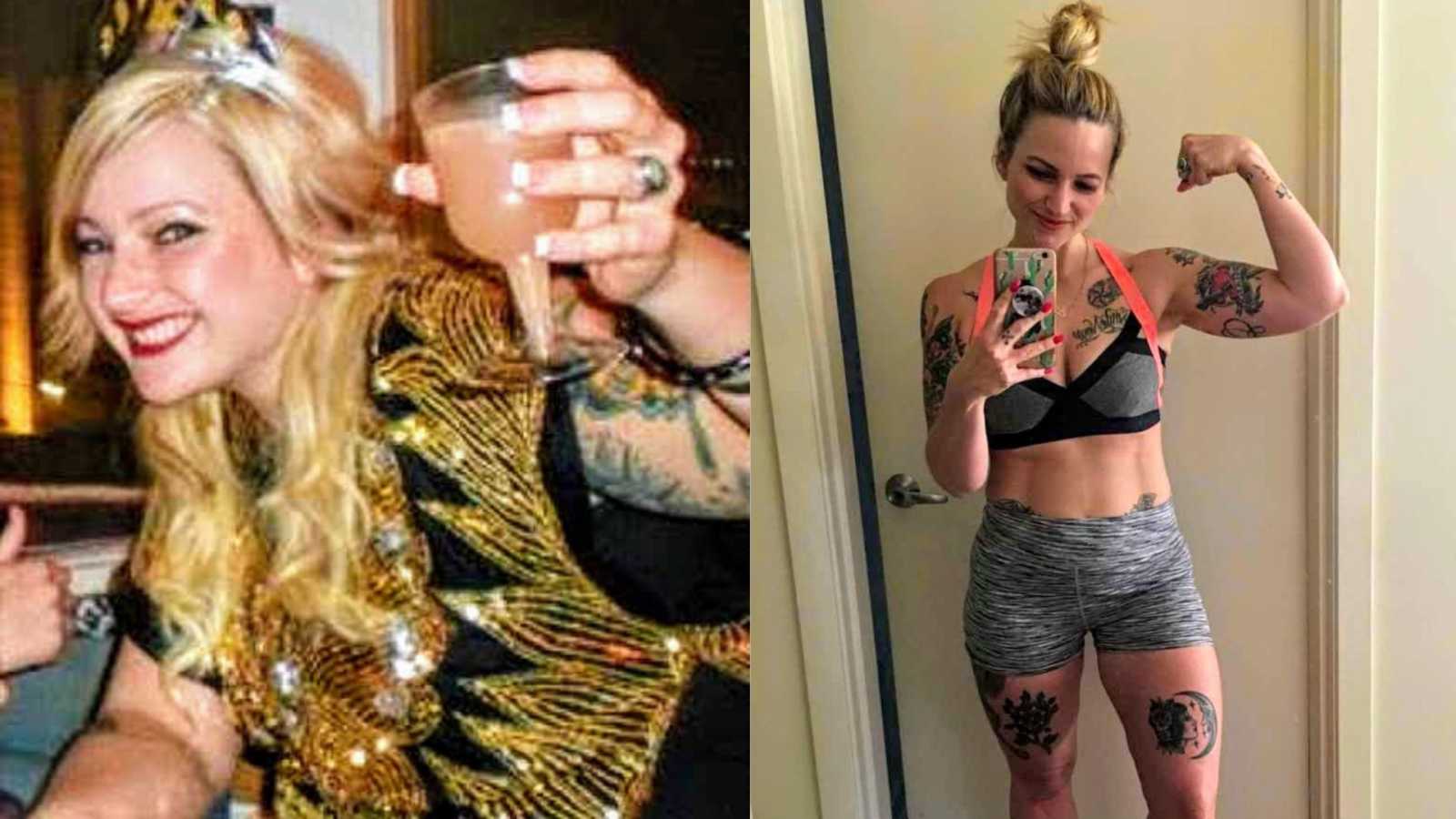 “I always struggled with my weight ever since I was a child. I grew up in an unstable home and used food as a way to control my feelings. I wouldn’t say I was a major binge eater but I definitely used food when I was feeling low.

When I was about 15 I started drinking every single day. When I moved to the Pacific Northwest I started drinking a lot more beer and then when I turned 21, going to the bar was a daily thing. I ended up eating most of my meals at bars and my grocery shopping consisted of processed foods. Budgeting for my health just wasn’t important to me. My weight climbed slowly throughout my mid 20s and then peaked at over 200 pounds when I was about 26. I saw a photo of myself and couldn’t believe it was me!

I decided to try weight watchers which was the first time I’ve ever thought about my nutrition. However I got really obsessed with low calorie foods and started eating a lot more diet foods. Diet soda and 0 calorie cheese. It was definitely a deprivation mindset that would lead to episodes of binging so the weight would come off and then I would put it back on.

I grew up hating exercise. I wasn’t athletic and I never played sports so in my 20s when I wanted to lose weight, I wanted to do anything and everything I could without having to workout. I even went to some extreme measures I’m not proud of. I heard about this diet called the hCG diet which was hormones supplements and a 500 calorie a day diet. I ordered some hCG from India (if that’s even what it was?) and followed the 500 a day calorie regime. Of course the weight fell off! I lost 20 pounds in a month but I felt horrible and put all the weight back on, plus some.

When I was 31 I met and fell in love with a man. While he made me feel beautiful the way I was, our relationship was built around a lot of negativity, feeling sorry for ourselves and drinking. But after 5 years of dating I really wanted to get married. He was always on the fence about marriage and settling down and although I didn’t feel like I pressured him or gave him an ultimatum, I guess I sort of did, unintentionally.

I was so excited when he proposed! He had picked out a beautiful ring and got on one knee and everything! It was during the planning of this wedding I decided I wanted to lose 20 pounds … you know, ‘for the wedding!’ I had found a girl on Instagram that was promoting virtual health and fitness challenges and I decided I would go all in it for three weeks! I thought, ‘Wouldn’t it be cool if I could become someone that actually likes to exercise?,’ but I kept my expectations pretty minimal. I wanted to get the most out of my investment and lose the 20 pounds for my wedding, so I followed everything recommended for the plan. I did the 30-minute home workouts, followed the clean eating portion control meal plan, drank the superfoods smoothies and showed up daily for my accountability in our community online. By the end of the three weeks I had lost 7 pounds which was pretty incredible.

But what I wasn’t expecting was how amazing I felt! I actually didn’t want to stop! I realized how important nutrition is to my mental health. I didn’t know I felt as bad as I did until I felt better. I used to get off of work after not eating all day, eat a giant meal and drink 2 to 4 drinks per night. I thought I was justified in that because I was relaxing after a long day and I was SO BUSY! But really, as we know, alcohol is a depressant and it was keeping me in a low energy state. I decided to follow another three-week challenge. And then another, and then another…

Before I realized it, I had lost 25 pounds and 25 inches! My fiancé would say things like, ‘don’t get too skinny,’ which was really frustrating because I felt like he was discrediting my hard work. Personally, I felt incredible! Trying on wedding dresses was so much fun and I felt so confident for our big day! We were married in Las Vegas with about 30 of our closest friends and family. We took beautiful photos at Red Rock National Forest and had a ceremony at the Neon Museum in downtown Las Vegas.

While I was getting healthy and losing weight it was driving a wedge between me and my fiancé. I had my doubts during the wedding planning, but I decided to push forward. I kept thinking he would come around and that it was normal that he didn’t want to be involved in the planning. Even though our wedding was really nice, as soon as we got home, he settled back into that depressed state. He shut me out, wouldn’t talk to me and made me feel like I was the problem.

One day he came home after six months of marriage, sat down and calmly said, ‘I’ve come to realize I’m not happy, and it’s because of you.’ I calmly told him to get out of our apartment and be moved out completely by the time I got back from Thanksgiving with my family. I had to make excuses why he wasn’t at our dinner. I came home to him moved out and my key next to his wedding band. It was so crushing. I had given and given and loved and given some more, to this man. Honestly the work I had done on myself, inside and out, gave me the confidence and strength to get through it all.

I was able to realize he was projecting his unhappiness with his own life on to me and our marriage. I had meant it when I said ‘till death do us part’ and he was jumping ship without really trying.

When he was leaving me, I asked him, ‘Why did you lie? Why did you say you loved me and recite vows to me on our wedding day if you never had intentions of seeing it though?’

He replied, ‘It takes two to have a dysfunctional relationship.’ At first I was so mad, but the more I thought about what he said, I realized he was right. I had to take some responsibility for my part in our relationship. He always was who he said he was, and I wasn’t the same woman who met him. I wasn’t dysfunctional any longer.

Ultimately looking back, I realize he did me a favor. I’d rather be alone than be married to someone who didn’t have my back. When he moved out I thought about giving up on my workouts, my nutrition and going back to drinking every night and eating my feelings. Instead I decided I could not control what was going on, but I could control how I reacted. I could control my health and that would give me power and strength to get through it. I continued to work on myself and lost more weight and gain more muscle definition. I never realized my body could be so strong and lean!

This all opened up my life to new opportunities and new friendships. I became a health coach and went full-time with it last year! I put myself through an online nutrition course and I’ve been able to help hundreds of women lose weight, gain confidence and learn about nutrition. Sometimes our biggest struggles are actually detours that lead us to what we’re meant to do and who we are meant to be! If I had never been engaged to marry this man who was not right for me, I would’ve never done this online challenge to lose 20 pounds. I had no idea that losing the 20 pounds was actually about uncovering the true healer and leader I’m meant to be.”

This story was submitted to Love What Matters by Amber Bayer of Portland, Oregon. You can follow her journey on Instagram. Do you have a similar experience? We’d like to hear your important journey. Submit your own story here, and be sure to subscribe to our free email newsletter for our best stories.

‘I was fed up’: Mom loses jaw-dropping 205 pounds for her ‘beautiful rainbow baby’