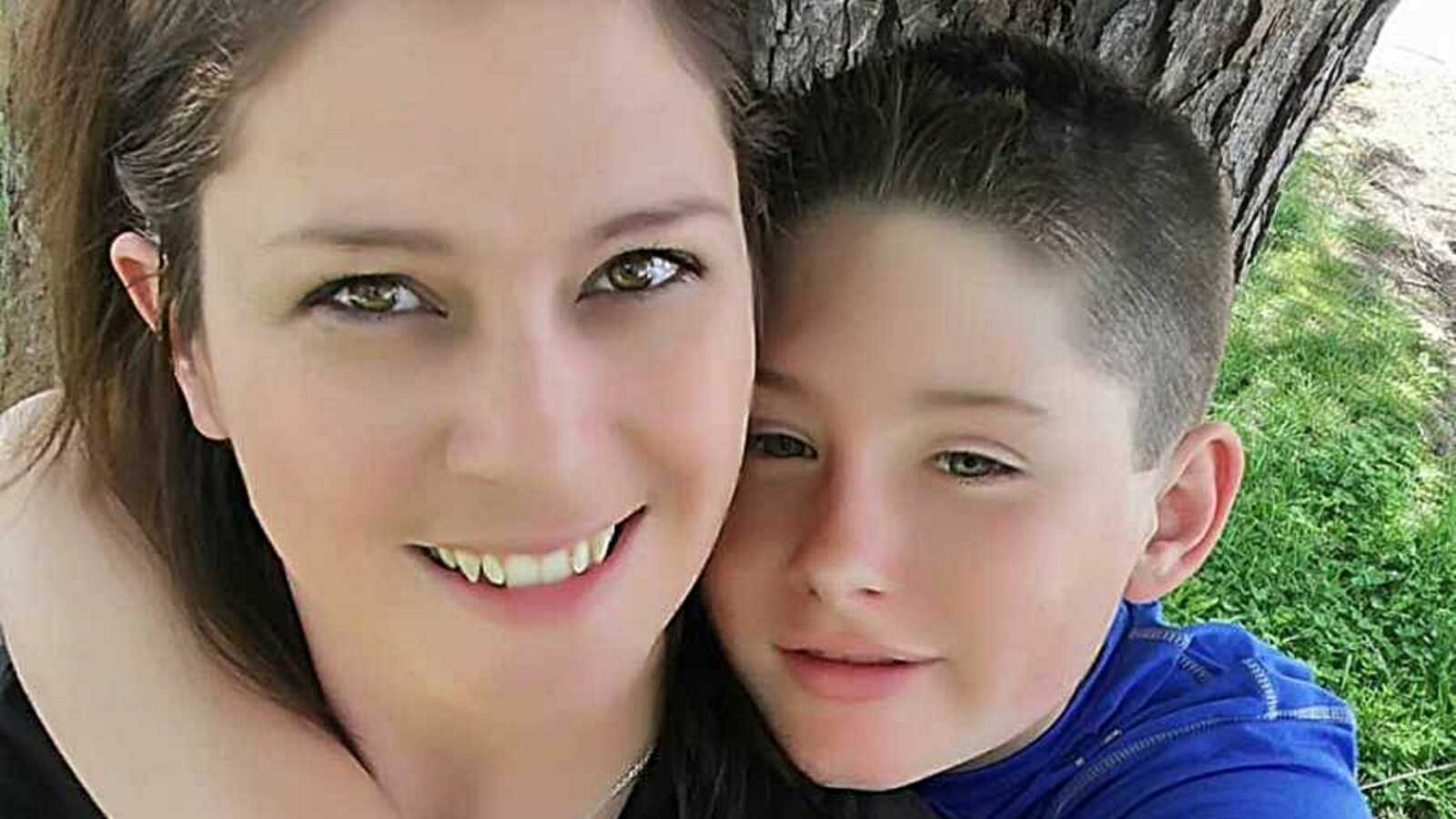 “In June of 2016, my son tried to end his life at 10 years old. He was going through a hard time, missing his Papaw who died a year before. By the time he was found, he had no pulse/heartbeat. He was stat flighted and spent almost a week on life support and wasn’t showing any signs of brain activity/improvements.

Never in a million years would I have thought suicide would cross my son’s mind. He’s always been a happy kid, full of life and love. After his Papaw passed away, he grew more angry, short tempered and got aggravated quickly. But I thought it was nothing unusual. I thought he was just going through a stage like all preteens go through, normal for most boys his age. He said everything was fine.

The following day, my sister, Mom and I were visiting with each other while our kids played. I had plans the following night with my crew to do a bonfire and make Smores. Jared acted a bit agitated like something was bothering him but went in the guest room. There was always ice cream in a deep freezer in there, so I figured he was being sneaky. He’d always eat when he was mad. But the porch light was connected in that room and my mom happened to look outside to see it on. She asked if he would shut it off. She went to open the guest room door to see why he was ignoring her. It wasn’t like him to ignore her. The door was locked, and I had to go get the key…

I will never forget the way she screamed. My heart jumped in my throat and I knew instantly something was wrong. My son had hung himself, and the way his face looked will forever be permanent in my mind. He was dark purple/black with blood around his lips. He was on his knees leaning forwards. My baby died!

I was around 30 weeks pregnant at the time with my youngest daughter so there wasn’t much I could do but cry for help while my mom and sister got him down. I spent nearly 10 minutes screaming in the streets begging for help, ‘My baby boy is gone!’ I was in shock! I went back in the room and saw that my mom had gotten him to breathe again, but he was struggling. After he got stat flighted to the nearest children’s hospital, the doctors took us in a private room and prepared us for what was behind the closed doors. He was hooked to so many machines and connected to life support. I nearly lost it. I just wanted to hold my baby tight and I felt like I failed him. As a mother, I should have seen these warning signs, I should have known, but I didn’t!

I was expecting the worst. He couldn’t keep his temperature steady and they had a hard time keeping it regulated. His temperature would drop and they put heat on him. Fevers would come and they had to put a cooling blanket on him. The shivers came along and it broke my heart. I just wanted to climb in his bed and warm him up. But I couldn’t. They had to place him in an induced coma so his body would relax and heal. Things got worse for him before they got better. His lung collapsed and the doctors said it could take a couple weeks to a month before he started showing any improvements, if at all. I spent literally every second sitting in a chair right beside him and the only time I left was long enough to go downstairs to grab a bite to eat and shower. I just stared at my precious freckled-faced boy while stroking his hair. I told him if he could hear me to know that I’m here with him and I’m not leaving his side, I loved him so much and needed him to pull through.

I can’t explain the feelings that overcame me when he woke up. God heard my cries, and all the prayers from myself and the prayer warriors. This is no doubt a divine intervention. He is a true fighter. He fought to survive. He had scratch marks on the back of his neck where he tried to get the rope off but eventually passed out and quit breathing.

God not only blessed me with my son once, but twice. I’m very thankful my baby boy pulled through this because without him I would be lost.

Here is his story he wants to tell…

Suicide has no season, awareness should be every day! Break the silence. Hi, this is Jared, and this is my story.

Three years ago, I went into my Pappaw’s room to ask to borrow a fishing pole. I walked to his bed to wake him up, only to find him passed on. I was 9 years old.

I never talked to anybody about how I was feeling, just that I missed him, but not how I felt deep inside. The depression.

A year later, just a few days past the one-year anniversary, I made a permanent decision off a temporary emotion. I attempted suicide.

My Mammaw found me and screamed for help. I had no pulse. My Mammaw worked on me, while my Mom flagged someone down to call 911.

It took 30 minutes for help to arrive. They had to stat flight me out. They put me on life support, and a week later, they pretty much said, ‘This is it. He’s brain dead.’ They said if I woke up, my quality of life would be slim to none. A few minutes after that conversation with my family, I woke up. The next few days were a blur, and I had to relearn things like walking and feeding myself. The doctors said that medically, I should not be here. They cannot explain it. That no one survives what I survived, no one lives to talk about it.

I thank God every day for finding me worthy enough to bring me back, and that I don’t get to decide when it’s my time to go.

I’m here to let you know, you are worthy! No matter how big or small your burden is, talk to someone. Don’t let depression win, there are and will be better days. Find something you like doing when you feel sad. I go fishing, then think about all the good, and how blessed I truly am.”

This story was submitted to Love What Matters by Amber Traxler and her son Jared of New Haven, Kentucky. Submit your own story here, and subscribe to our best stories in our free newsletter here.

‘He tried committing suicide by hanging. By the time he was found, he had no sign of life left in him. ‘No, no this can’t be happening. This can’t be real!’’