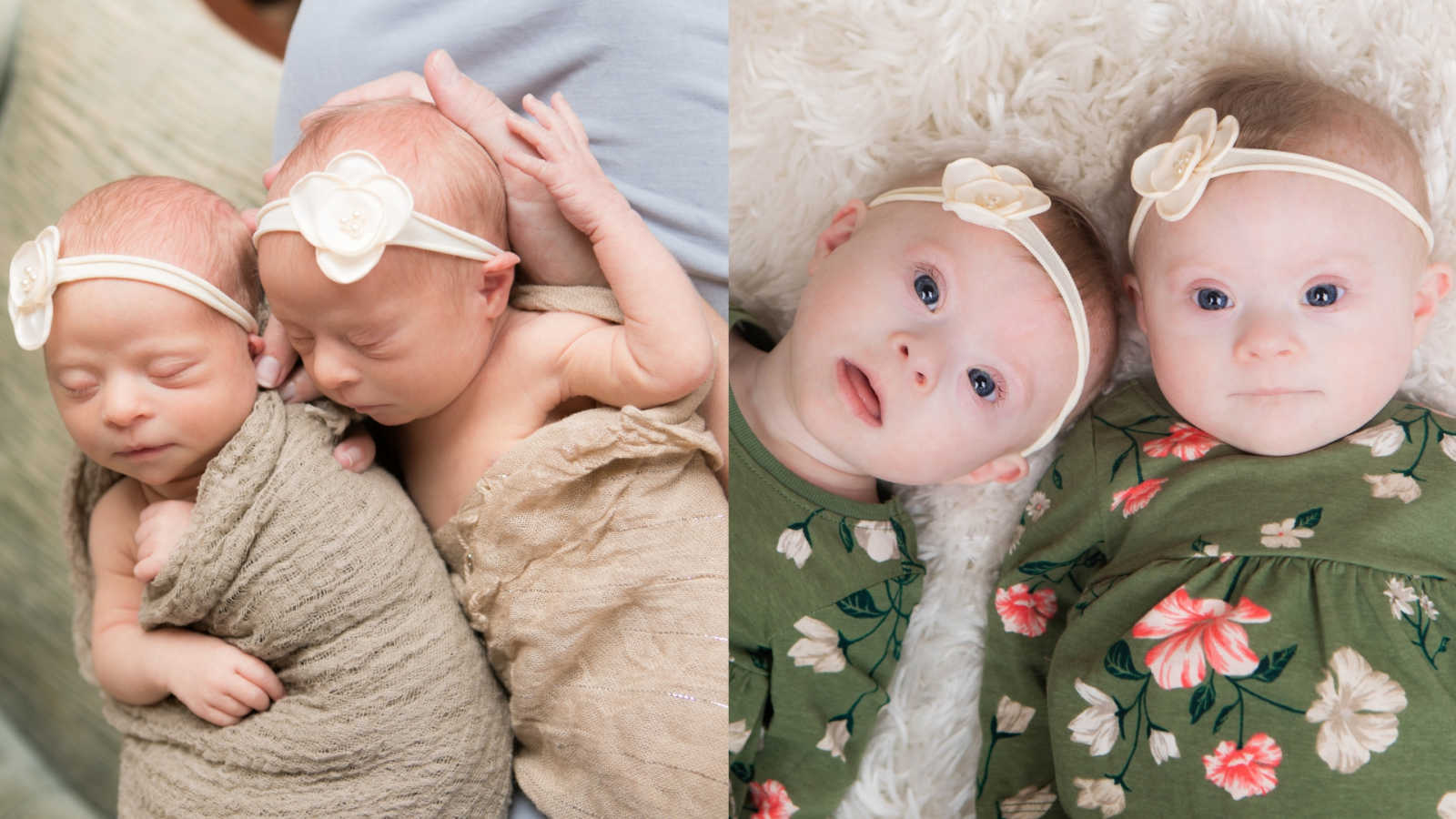 “We were done having children… and then we weren’t. We had three beautiful children. Our girls, Analyn and Raelyn were 6 and 5 years old. Our little man, Caleb, was almost 3. That seemed like a good crew to us. Then the fever returned, baby fever. My name is Jay. My wife’s name is Rayni. And this is a story of how God blessed us in the most unexpected way.

We were pregnant again! Obviously, we were over the moon with excitement. But everything about this pregnancy was different. Rayni was sick ALL of the time. She was exhausted ALL of the time. And, any day she could get away with it, she would spend entire day in the bed. Of course we were in our late 30s by this point. So that was our working theory for why this pregnancy was harder.

Finally ultrasound day rolled around. As the technician was moving around Rayni’s belly, she gave a little laugh. ‘What is it?,’ we said. She looked at us and, through her laughter, said, ‘There are two in there!’ I immediately just cracked up laughing. Rayni looked like she had seen a ghost! The only words she could seem to muster were, ‘Are you serious?’ After Rayni had asked that question about five times, all receiving the answer ‘yes,’ it seemed to sink in. Then her color returned to her face and she joined in on the laughter, a little.

We are firm believers in God. The Bible tells us He knows the number of hairs on our heads. And He is orchestrating life for His purposes. So we knew this was a gift from Him. We knew He wanted us to have twins because we were having twins. It was that simple for us. Like our three other pregnancies, we refused any of the tests that could reveal genetic disorders or defects. We did that for the same reason as above. All life is precious because it is a gift from God to us. We are stewards. So that was, and continues to be, our mindset.

Throughout the pregnancy we had numerous ultrasounds due to Rayni’s age and because we were having mono/di identical twins (the babies shared a placenta but each had their own amniotic sac). The babies were progressing on schedule for most of the process. Then, around the 30th week, we found out we had gestational diabetes. So this was monitored and ended up controlled by medicine. Then an ultra sound revealed one of twins had slowed a little on the growth chart. We were sent to a specialist to do a more in-depth ultrasound and give a recommendation on moving forward. (It was at this ultrasound when a sweet little ultrasound technician accidentally informed us we were having girls! We had wanted to wait until delivery to know. She was mortified and very apologetic. Again, all things happen for a reason. We assured her it was no big deal.) After gathering the information (growth scans, blood pressure, and diabetes), the specialist recommended we be induced the following Monday. We were in our 36th week.

So we began to make preparations. On Sunday, we were up and getting dressed for church. I was in the shower and Rayni came in to say she was having strong contractions. She said they weren’t too close together, but just for me to be aware. By the time I had shaved, I heard a painful scream, ‘oooooooooooohhhhhhh!!!’ Rayni was lying on the bed in serious pain. That contraction passed. Within 10 minutes she was sitting at our kitchen table in tears from the pain. It was time! I called my parents to come and stay with our kids. Once they arrived, Rayni and I hit the road.

On a normal day, the drive from our house to the hospital is about 40 minutes. When your wife is coming up off the passenger seat in tears with contractions at shorter and shorter intervals, it takes 26 minutes! Sometimes speed limits are just suggestions. The hospital knew we were on the way. I pulled up honking the horn and the staff met Rayni with a wheelchair. I left the car running with the doors open until we got upstairs. When she was checked in, I went back to park the car and hustle back up. I got off the elevator and was met by a nurse saying Rayni had already been sent to delivery, we were at 8cm!

Baby Ava arrived quickly, even before the epidural kicked in! She was born no more than 15 minutes after we entered the delivery room. Then there was a problem. Cora had drifted high up in the uterus, her heartbeat dropped, and Rayni’s cervix closed. They had to do an emergency C-section. The epidural still wasn’t working, they had to put Rayni to sleep and I was kicked out of the room. A few minutes later I was in a room with our sweet little twin girls! Rayni was in a recovery room and doing well. Because of their size, the twins were taken to the NICU. While in the recovery room, Rayni hemorrhaged and drifted in and out of focus and was pale as a ghost. I was too! Thankfully, they were able to stabilize her in the room and she was able to rest.

An hour later, a doctor came in that we hadn’t seen before. She introduced herself and began to talk about the twins. I can’t remember any of the words the lady said except for two, Down syndrome. It was as if she came in, dropped a bomb in the room, and then she left. My immediate thoughts raced to ‘How long do people with Down syndrome live?’ ‘Are we going to have to bury our twins?’ Those questions and about a million others raced through our heads. We sat there shocked and speechless. Then I stood up and asked Rayni to do the only thing you can do in such an unexpected situation, pray. Instantaneously the fear subsided. God had trusted us with two special souls. We didn’t know how we would be able to handle it, but He knows. That’s all that mattered. We later found out that having identical twins with Down syndrome happens once out of every million pregnancies! We had been chosen for this task! We were literally one in a million. Through our OB doctor, God sent us a couple who had been through what we had just experienced. They basically hugged us and said, ‘You’ll be fine. You have just been given a gift.’ The peace they brought to us cannot be explained by words adequately. But we are forever grateful.

After a brief NICU stay to make sure we could maintain a good temperature, gain weight, and breathe well, we were home! Ava and Cora have no heart defects typically associated with Down syndrome.

Fast forwarding to the present, they’re beautiful healthy babies. They are great babies. They are always smiling and beginning to laugh at us! And Rayni and I are overwhelmed at the opportunity God has given us. We are so in love with those beautiful little ladies! And we can’t wait to see what this adventure holds for us and them in the future.”

This story was submitted to Love What Matters by Jay and Rayni Sivley of Hartselle, Alabama. You can follow their journey on Instagram. Do you have a similar experience? We’d like to hear your important journey. Submit your own story here, and subscribe to our best stories in our free newsletter here.

Read another beautiful story about twins with Down syndrome: