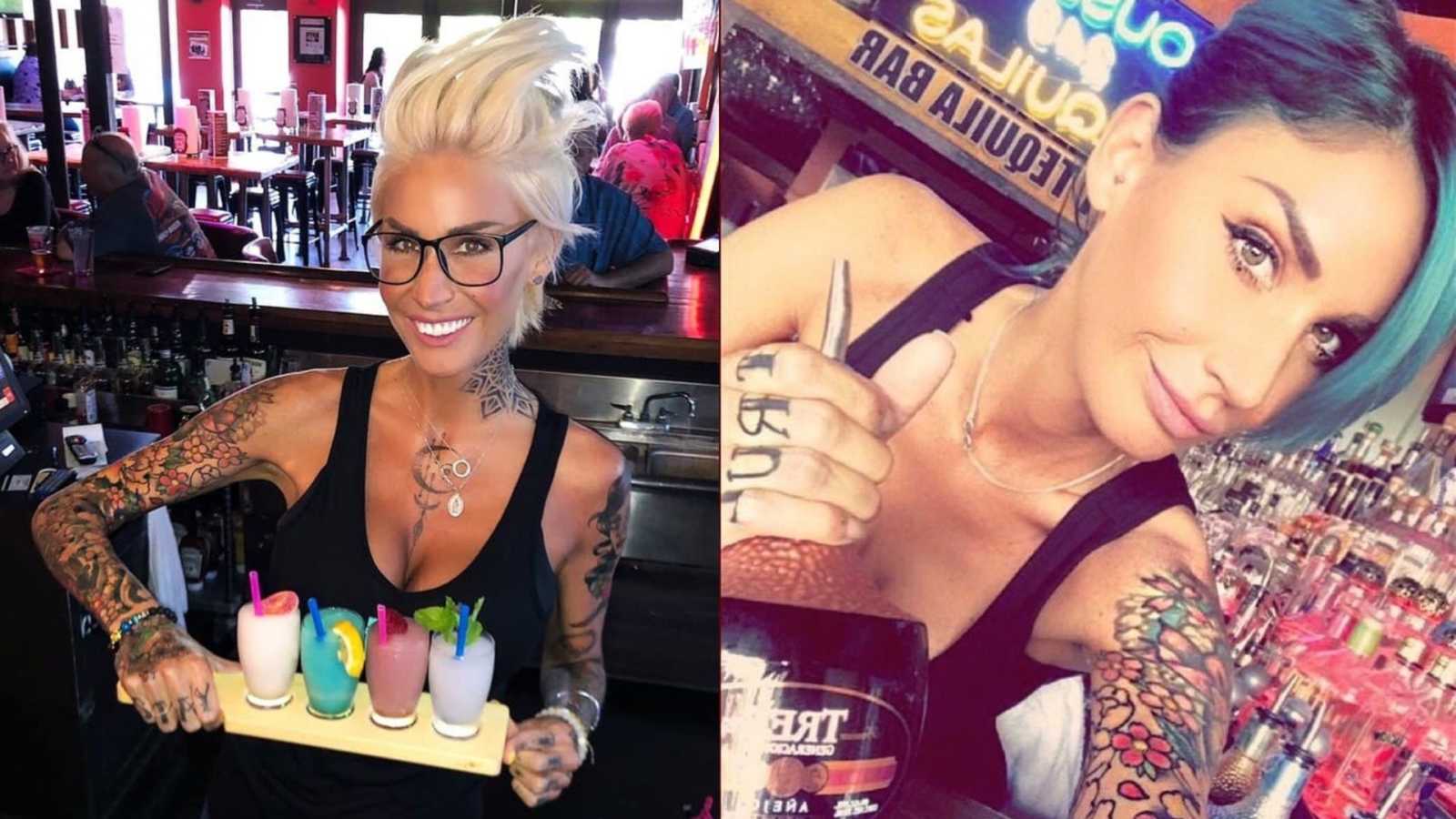 How can I spend an entire shift behind a bar surrounded by literally hundreds of bottles of booze and not be tempted? I mean, it’s at my fingertips. Like – literally. I am literally holding bottles of the substance that nearly killed me so many times and pouring it in front of my face for 8 hours a night, 5 to 6 days a week.

People ask, ‘Isn’t it so tempting? Why would you put yourself in that position, as someone who is trying to maintain a healthy lifestyle?’

Here is my answer.

I made a choice three years ago to quit drinking. For my OWN reasons. No one made it for me. I was not court ordered to quit. I decided for ME that I wanted to live a healthier lifestyle. That being said, what difference does it make if I am swimming in a pool of wine or working a desk job? If I made a decision to drink again, (which I can’t even fathom EVER happening), but if I did, I would find a way to do it regardless of my work setting. In addition, I take pride in my work. I love what I do and I love doing it to the best of my ability. When I go to work, I am there to do just that – WORK! Even in my drinking days, I took pride in my work. There is nothing attractive or professional about walking into an establishment and seeing a sloppy drunk bartender behind the bar.

Let me back up. I started bartending at the ripe age of 18 and it was pretty much downhill from there, as I already had that taste of booze and now had full access to it daily. For the next 16 years, I pretty much lived the same day on repeat. Every story I have is different, but they are all the same. Every night was a party. And after the party came the afterhours bars… then sleep and repeat. I managed to rack up two DUIs in my 20s, both times blowing over three times the legal limit. Both times totaling my car. Both times getting arrested. And, both times I had great lawyers so I got off with basically a slap on the wrist, so I definitely didn’t learn my lesson immediately following those arrests. I also got arrested for being drunk in public once, because I was in 7-11 and had no clue where I was or how to get home. I spent the night in the drunk tank and of course, the next day, I thought it was hilarious. I hadn’t learned my lesson yet.

I had many close calls with death because of drinking. Crashing my cars was just the beginning of it. Years later, I would find myself in the ICU for almost unintentionally drinking myself to death. You know what’s worse than waking up in a hospital hooked up to a ventilator with a catheter in and no clue how you got there? Being so terrified because you have no memory of the night before? Feeling your head pounding as if it got run over by a dump truck? Your hands shaking so badly from alcohol withdrawal that you can’t even pick up the cup of water next to your hospital bed? Being hooked up to so many machines and IVs and not being able to talk because of the breathing tube? Not waking up ever is worse. And I thank God daily that He had other plans for me than to die in that hospital bed that night.

I had no shame when I was drinking. I’d stumble to my friend’s house blacked out at 2 a.m., because I knew she had a hammock in her backyard. I woke up on so many occasions sleeping in the actual dirt NEXT to the hammock, because I was too drunk the night before to figure out how to get in it… or how to simply just knock on her door instead of sleeping outside. This is the insanity of the disease. You will do things that are absolutely crazy, but in your mind, it’s ok because everyone does it, right? Wrong.

I’ve attempted suicide because of my drinking. It wasn’t even those attempts that made me finally stop. It was only after a drunken run-in with an ex-boyfriend. While blacked out, I ran behind the bar of a venue where my ex worked, and I started hitting him. THAT was my breaking point. Hearing what I did was the straw that broke the camel’s back. I was quiet for a moment, then I said with tears in my eyes, ‘That’s it. I am done drinking.’

That was that. Never again.

Something that has always baffled my mind, is why people automatically assume that a bartender’s job is to get wasted with their guests. Don’t get me wrong – back in my hayday, there were definitely a few occasions I got rip-roaring drunk during my shift. It was never pretty, by the way. But, it most certainly was not a regular thing. Not only do people assume this is part of my job description, but they get offended when I politely decline a shot offer or say I don’t drink. I normally get an eye roll with a response like, ‘a bartender who doesn’t drink? You can’t be good at this.’ Or, of course, the popular, ‘I don’t trust a bartender who doesn’t drink.’ And let’s not forget the, ‘why don’t you drink?’

Here’s my question. Why is alcohol the only drug we have to explain as to why we don’t consume it? Why is it considered weird by so many people that a bartender chooses not to drink? Why should I have to explain myself and, moreover, how does my choice not drink in any way make me incapable of doing my job correctly? Wouldn’t it be obvious that, if anything, it makes me MORE capable of doing my job?

Do I ever get tempted being behind the bar surrounded at all angles by booze? By seeing people all around me drink casually and enjoy themselves and their time with friends? I get tempted every day in life, but it’s not a work thing, it’s an everyday being a human with faults type of thing. What’s important is not giving into temptation and remaining strong and true to myself and my beliefs. It’s never letting temptation overcome me by always remembering where I came from and how far I have come. I was never a social drinker. I was a ‘drink til I fall off my barstool’ type of drinker. Sure, I was fun for the first drink or two, but I didn’t have an off switch when drinking. So no matter what fleeting thought crosses my mind like, ‘Hey, maybe I could do what these normal people do.’ It quickly dissipates within seconds when I remember to finish playing the tape out in my mind…where the ending to my drinking is never pretty. It is just a part of my life that my mind is fully made up that I never want to return to. I could be pouring 500 shots, making a 20-gallon cooler of jungle juice. Hell, I could be taking a tequila shower and it still wouldn’t change my mind.

To be clear, I am not against drinking. I wouldn’t continue doing the job I do if I felt that strongly against alcohol consumption. What I am against, is ME drinking. I am against binge drinking. I am against abusing alcohol. In my line of work, I am trained to know when someone has had enough and to cut them off, to ensure alcohol abuse NEVER occurs on my watch. I love what I do and I love being able to meet so many new and interesting people from so many walks of life. But mostly, I love the fact that I am sober so I can remember these people and the conversations we have.

I am lucky enough to have a pretty cool job where I get to socialize with people and help be a factor of how their evening goes, whether it be a first date, an outting with a friend, a bachelorette party, a mom and daughter hang out session or maybe just a solo person coming out to meet some new people or have some company. I love meeting new people and I love that these people who sit down at my bar get to have my full sober attention, rather than me forgetting their drink order three seconds after they tell me because I am too lit to remember. So, if you ever walk into a venue and see me behind the bar, feel free to order the fanciest whiskey you like, and I will cheers you with my cranberry juice and you can tell me about your day. I believe life is about being happy, and right now, I am pretty grateful and happy for my awesome job and for being sober while I do it.”

This story was submitted to Love What Matters by Erica Haywood. You can follow her journey on Instagram. Do you have a similar experience? We’d like to hear your important journey. Submit your own story here. Be sure to subscribe to our free email newsletter for our best stories, and YouTube for our best videos.

‘I found his gun while blacked out. I held it to my head, trying to pull the trigger. His roommate ripped it away.’: Woman’s life has changed ‘drastically’ since becoming sober, turned her ‘nightmare’ into a ‘blessing’

‘I was dating a guy. He ended it. He didn’t see a future because, ‘while he was partying, I’d just stand there.’: Woman recalls the perks of dating sober, says ‘you value yourself,’ learn this ‘awesome thing’ called ‘standards’