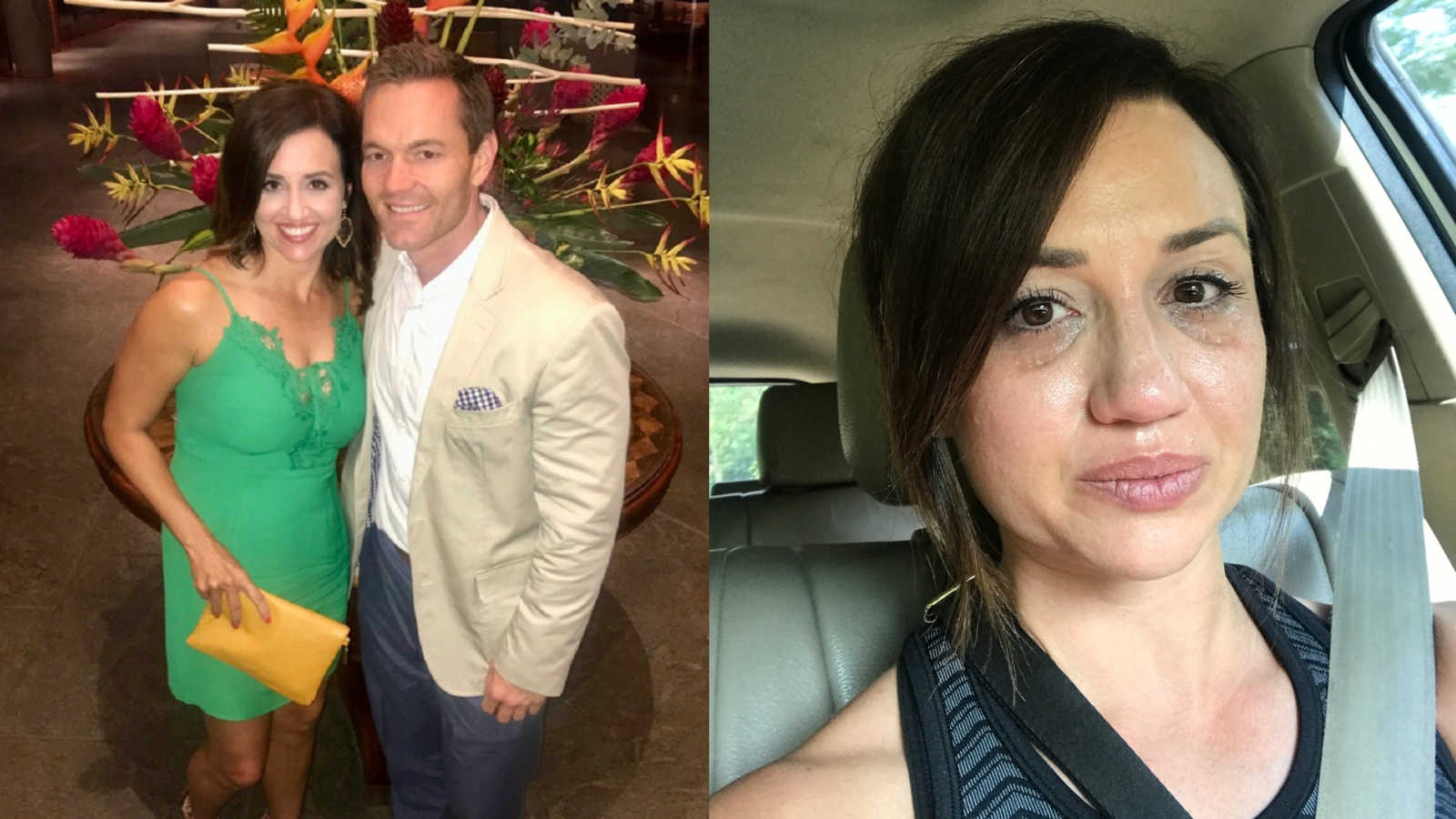 “If talking to an ‘old friend,’ the conversation always starts with them saying, ‘Wow, I would have NEVER guessed! I had NO idea!’

‘I know, I know. I hear that all the time. In fact, that’s what kept me drinking long after I realized I had a problem. I was in denial alcoholics looked like ME. I was a professional. I had my dream job and three healthy kids. Carl and I were happy and financially secure. I wasn’t missing work or even going in late. I’d never gotten a DUI, gone to jail, or done anything to embarrass myself…’

I didn’t really drink much in high school and college. We didn’t even drink at home when we first got married. But by the time I was 30, I’d checked all the boxes. I’d married the perfect guy, had three toddlers, lived in a beautiful home. We were going to church and had a strong group of friends. After four years teaching, I’d become an elementary school administrator. I had everything I’d ever wanted, but I felt empty.

I figured I was unhappy because I wasn’t doing life right. I just needed to try harder. So I hosted play groups and big dinner parties. I volunteered for anything needed at the church and school. But I was always uncomfortable when I was with people, awkward, like I was climbing out of my skin. I believed I must be a bad friend. (I didn’t realize for a few years I was just an introvert!) I was determined to make everything homemade or handcrafted and I always wanted our family to look put together and stylish. But I really liked my job, so I assumed I must not be a good enough mom. I didn’t sing in the choir or teach a Sunday School class, and I had no desire to go on a mission trip, so I decided I wasn’t a good enough Christian. I was miserable. But when I looked around, everyone else looked so happy. What was wrong with me? I wanted to FEEL how everyone else LOOKED.

Then one winter, Carl and I started having cocktails at home after putting the kids to bed. It was perfectly safe. We were grown adults, in for the night. I remember feeling relaxed and at ease. All the questioning and self-doubt, all the stress, insecurities about being a good mom, wife, and friend were gone. I didn’t feel ANYTHING, and it felt so good.

While I didn’t turn into an alcoholic overnight, things began to shift. I started wanting cocktails every night. I wanted to relive that experience of feeling nothing, numb, at ease. Carl couldn’t understand! Why would I want to drink on a Tuesday, in the middle of the week, if we both had to work the next day?! It was a slow fade at first. I justified drinking because I was stressed, emotional or we had reason to celebrate. But drinks after the kids went to bed eventually became a bottle or two of wine after work. If Carl asked me once, he begged multiple times, ‘Why can’t you just have 1 or 2? Why can’t you slow down, or even skip a night?!’ I couldn’t only drink on the weekends, I was drinking every day. I’d start each day with the promise I wouldn’t drink that night. But by 8:00 p.m. I’d be passed out. ‘Daddy, why does mommy sleep all the time now? She falls asleep before we do!’ I’d try to save it for holidays or special occasions, until ‘Taco Tuesday’ was an excuse to drink margaritas. Things I swore I’d never do, I started doing. ‘Mommy, last night, you asked us the same questions three times!’ I was lying to Carl, hiding bottles when he’d go on trips. I was drinking alone with the kids and making poor choices. I decided wine was my problem, if I switched to the ‘hard stuff,’ I wouldn’t drink as much. I just ended up spending more on Tito’s instead of Cabernet, and getting drunker faster.

I was miserable when I was sober, comparing myself to everyone else. I was miserable after I’d drink, worried I’d lost control, feeling physically beat up. I was exhausted from trying to manage work and home with controlling my drinking. I knew I had a problem. I’d tell myself I needed to cut back, but everyone around me was drinking so I must be overreacting. But despite my best efforts to regulate it, to quit after a couple, I’d end up drunk again. Insanity. It was lonely. I was afraid to tell anyone what I was thinking, assuming no one could understand anyways. But the harder I tried to stop, the harder I’d fail, and the harder I’d drink to numb the guilt and the shame. It was maddening.

I spent two years talking to an addiction counselor, lying to him the whole time. I couldn’t imagine life without drinking. How could I ever go on vacation, tailgate a football game, or go out for date night without drinking? How could I enjoy my patio, our fireplace, our boat?

In June of 2015, while Carl was out of town I called him so drunk, I don’t even remember. After I sobered up, I knew I’d scared him. He’d felt helpless thousands of miles away while I was home with the kids. For the first time ever, I felt selfish. While he never gave me an ultimatum, I felt close to losing everything. What I’d been trying to do all by myself wasn’t working. I was sick and tired of being sick and tired.

On July 16, 2015, I took my last drink. Through a series of divine interventions, I ended up at a small women’s rehab in the hills of Tennessee. There, I learned about my DISEASE and the ‘phenomenon of craving.’ I learned I couldn’t cure it myself any more than a patient can cure their own cancer. I was sick. I literally gave up and admitted I was powerless. I had to acknowledge nothing I was trying was working, so why not ask God to take over? I was immersed in a 12-step program, something I swore ‘didn’t apply to me,’ where I learned humility. They told me if I really wanted to stop drinking, I just had to avoid taking the first drink. I stopped trying to stop, and started trying to live.

Since then, I’ve met more women just like me. They didn’t grow up planning to become alcoholic. They drank long past the point they knew it was abnormal because they believed they weren’t ‘bad enough,’ to be diagnosed alcoholic. I remember that feeling, being afraid to ask for help, convinced I could quit anytime if I just tried harder. I share my story in hopes it will relate with someone so they don’t feel so lonely. I want to show there’s peace in recovery, life IS still fun. I do all the same things I ever did, only now I’m fully present, without regrets.

Carl is my greatest support. He gave up drinking when I did, often sharing the perspective of supporting (and fighting) a loved one. Our kids know everything. They know I’m not perfect. They’re seeing that admitting weakness and seeking help can build strength. It’s increased our faith as we share how dependence on God can help us and keep us grateful for all parts of our story. It’s allowed us to have important conversations about their own choices. Comparing ourselves to others, believing we’re invincible, and keeping secrets is dangerous.

We all have the potential for some ‘thorn in our side.’”

This story was submitted to Love What Matters by Alyssa Adkins of Cincinatti, Ohio. You can follow her journey on Instagram and her blog. Do you have a similar experience? We’d like to hear your important journey. Submit your own story here, and be sure to subscribe to our free email newsletter for our best stories.

‘I woke up handcuffed to a hospital bed covered in my own vomit, dirt and mud caked in my ears and under my perfectly manicured acrylic nails.’