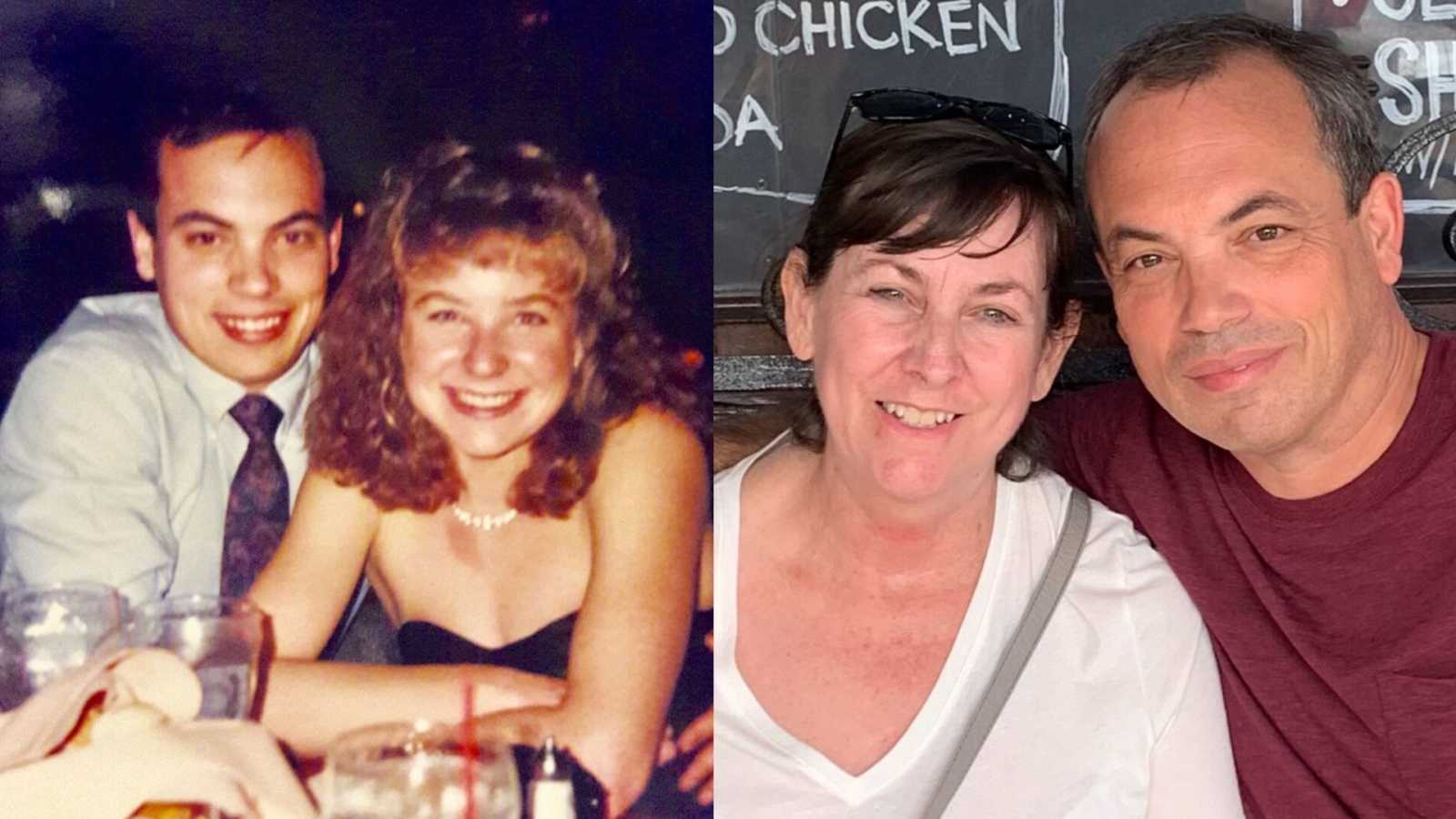 “Grief is a lifelong journey. As much as others wished I could, I could not wave a wand and be over it.

My life was turned upside down by the sudden death of my fiancée and soulmate, Dana. The night prior to heading back to Cal Poly San Luis Obispo for her final weeks before graduation, she kissed me goodbye and said, ‘Three more weeks and we’ll never have to say goodbye again.’

Those were the last words Dana ever said to me. The next morning, just outside of our hometown of Bakersfield, a car took a left turn too carelessly. It clipped the back of Dana’s car, spinning her out of control. Her tiny car was then swallowed by an 18-wheeler coming from the opposite direction.

Over time I have better understood that there’s no real fighting the way it ebbs and flows without any true predictability. I’ve learned that it’s best to let the happiness, sadness and even the bitterness and anger come and go whenever that particular emotion needs to rear its head.

Two years ago, I began writing. By sharing my thoughts and experiences with others, I have discovered by the messages of support I’ve received from all over the world, that I am not alone and I am not odd to feel the way I do.

Labor Day weekend was an opportunity to personally celebrate my journey, as I’ve finally allowed myself to celebrate my past rather than only mourn it.

Almost 30 years to the day, on September 8th, 1989, Dana and I got dressed in our best black clothes and traveled 2 hours from Bakersfield to Los Angeles to see our favorite band, the wildly popular goth band from England, The Cure. It was the third time we had seen The Cure together in Los Angeles. But this was an especially noteworthy performance as they were headlining my beloved Dodger Stadium, with Love and Rockets and the Pixies as the opening bands.

This night has become etched in my mind forever. The magnitude of our little band reaching such widespread appeal was a goose bump worthy accomplishment. We danced and enthusiastically sang each word to every song The Cure performed that night.

Since Dana’s death, just 14 months after that show, The Cure’s haunting dark lyrics and melodies has been a constant in helping me through those days where I need that extra push.

They’ve managed to do for me what therapy never was able to.

And the Pixies’ raw angst has always allowed me to realize that it’s okay to feel rage when I am feeling like it’s me against the world.

Last spring it was announced that The Cure would be headlining the Pasadena Daydream Festival at the golf course adjacent to the Rose Bowl, on August 31, 2019. The Pixies were also announced as the top billed supporting act. I knew immediately my oldest son Dylan and I would be there, wearing our best black.

Dylan shares my passion for alternative music. What other father-son duo do you know that has done an alternative music radio show together? Our show, The Hole Enchilada, was on 89.1 KHOL in Jackson, Wyoming, for several years. Our bond through music is so unique and so special. We’ve even gone to the Coachella Music Festival 10 times together over the past 12 years! This was to be our third time seeing The Cure together.

Dylan flew from Phoenix to Los Angeles to visit a friend living in LA, and to see another band the night before. I drove over the day of the concert with my wife Shelly.

Shelly has a traumatic brain injury and PTSD, so a concert is the last place she would be. We checked her into a nearby hotel where she could have a nice, quiet and relaxing evening.

To say it was a magical night is an understatement. Watching the Pixies and then The Cure perform many of the same songs that Dana and I saw them perform 30 years earlier was surreal. It was one of those cherished times where I could feel one with Dana and not feel any despair about it. To be sharing this special musical night with Dylan was awesome, as my then and my now were perfectly colliding.

As The Cure performed ‘Pictures of You’ a tear rolled down my face as I sang along to the familiar and appropriate lyrics sung by lead singer, Robert Smith.

The next day Shelly and I drove two hours north to our hometown of Bakersfield. Shelly’s sister has been sick so this was the perfect weekend to get to Bakersfield to see her.

Shelly and I had become the best of friends after Dana’s death. She would listen to me unconditionally where most others became increasingly uncomfortable around me.

Three years later, our relationship surprisingly changed. This was met with outrage from those closest to Dana. Outrage due to the fact that Shelly was a friend of Dana’s. I was told I was expected to eventually move forward with my life, but not with Shelly.

Shelly and I celebrated our 25th wedding anniversary in May.

Six years ago, her life was forever changed by a freak explosion within our home. I am now Shelly’s caregiver. There are so many things she can no longer do for herself. But being around her every day, I can’t put into words how inspiring she is to me in her courageous daily battle. She deals with the ramifications of her brain injury and PTSD with such positivity and grace. I am in awe of her strength and optimism.

My last trip to Bakersfield, I had visited Dana’s parents for the first time in over 23 years. I have written an emotional account of that 2017 visit, which was read by thousands.

I have so much gratitude that I have been able to re-establish a strong relationship with both of Dana’s parents. I wasn’t completely overcome with emotion during this visit. Sure, some tears were shed. But it felt perfectly right and normal to be sitting in the living room where Dana and I shared our first kiss 32 years earlier.

The following day, as we were about to drive out of town, Shelly and I made a stop at Hillcrest Cemetery. Shelly’s stepdad, Ken, passed away last year while we were with him at his home in Utah. We wanted to visit his final resting place, as well as visit Dana’s gravesite.

As we passed through the last major intersection approaching the cemetery, I unexpectedly started crying. I had spent so many painful, isolating days here over 25 years ago. I hated this place and it had become a prison within my mind.

As the emotion hit me in an instant, Shelly grabbed my hand and I immediately knew – it was going to be okay.

As we pulled through the cemetery gates, The Cure’s ‘Lovesong’ had just begun playing on the radio.

After visiting Ken’s resting spot, we drove to the other side of the cemetery to visit Dana’s.

It all felt so familiar, yet so different. The trees had all matured. So much time had passed.

It took time for us to find Dana’s site. I started to feel panicked as I was surprised that I had lost the ability to walk right to it. Once we found it, Shelly gave me a big hug as I again was overcome with emotion.

‘Do you want some time alone?,’ she asked me.

It had taken me almost 30 years to feel peace and harmony.

I felt a sense of freedom to finally be feeling it.”

This story was submitted to Love What Matters by Bob Millsap, a 50-something who has been on a long journey with grief and adversity. He is blessed with an amazing family, wife Shelly, and sons Dylan (24) and Taylor (19). He lives in the far western suburbs of Phoenix, Arizona. You can follow his journey on his blog, Ten Thousand Days.

‘As I drove up to the cute 1950’s California ranch house, the emotion of our shattered future hit me hard. The tears flowed down my face.’

‘Ginger ale slowly fermented and turned into a bomb. It detonated at the exact moment she walked passed it. The force of the blast knocked her unconscious to the ground.’