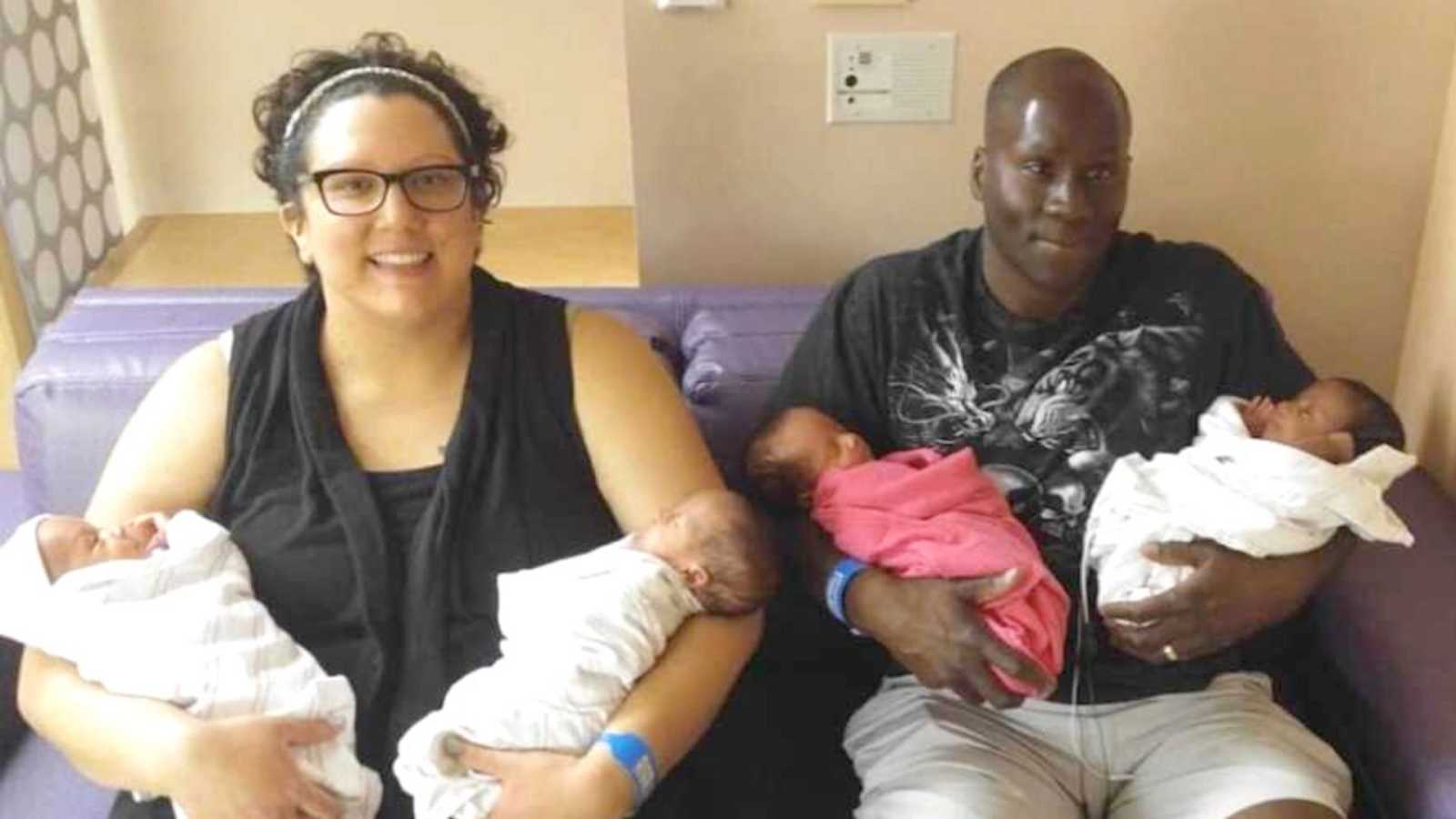 “It’s weird to say, but my infertility journey began at the age of 12. I had just started my period at age 11 and here I was, having life-saving surgery at such a young age. For the whole day, I had excruciating pain in my lower right abdomen. It was so bad I would fall to the ground when I would try to stand up. My dad took me to the ER and I was given Donnatal to help with the pain and told to come back in the morning. Sure enough, when morning came, I was in pain again. I was taken back to the ER and admitted for emergency surgery. They thought it was my appendix and prepped me for surgery.

Once they cut me open, it was a whole different ball game, literally! They could not get to my appendix, as there was a huge mass of blood blocking it. A gynecologist was called in immediately to see what was the matter. Turns out, my right ovary and ovarian tube were twisting while gathering blood. The provider said my right ovary was bigger than a softball. It was beyond repairable and had to be taken out. Little did they know back then about PCOS, I was put on a high dose of birth control, which created massive weight gain and emotional issues.

Fast forward to my early 20’s when I met my husband. I had another appointment with a gynecologist to help me figure out my period issues, which is when I was officially diagnosed with PCOS. I was prescribed metformin and took it for a few years. In 2011, my husband and I decided to start our family. We have been together since 2003 and thought the time was right.

I had some help from a gynecologist by taking Clomid and progesterone. I only lasted 2 months before my anxiety came out full force. It was so bad, I couldn’t even take a shower or brush my teeth without having a panic attack. I decided to start therapy to help figure out what was triggering these attacks.

I eventually sought help at a behavioral health facility and did intensive outpatient therapy for a few weeks. There, I understood why I was the way I was. After some time passed, we decided to try again in October of 2012. I made it through a whole year on meds to try and ovulate. I was very proud of myself, as last time I only made it 2 months. Something told me I would need more help, as none of the test strips showed I was ovulating. I decided to reach out to an IVF clinic.

I did the usual bloodwork and paperwork, only to be called later and asked to come back. My bloodwork showed something surprising. I was already pregnant! The tears fell down my face and I could not believe my eyes. The happiness and smiles were short-lived once I went for my first scan. The provider could not find the sac and believed it was an ectopic pregnancy, or a pregnancy growing within a fallopian tube. I was given the methotrexate shot to stop the pregnancy and had another follow up to make sure it worked.

I went back and was told the shot did not work and I needed to go see my gynecologist. I followed up and was told I needed emergency surgery that day, since the baby was still growing. He also mentioned he noticed a growth on my bladder and would do a biopsy. The surgery went well and my sadness sunk in even more. I worked so hard for this pregnancy, only for it to be taken away.

I went back for my post-op follow-up and was told I needed to see a urologist. Once again, I was told I needed another emergency surgery, this time it was for my bladder. I had surgery within 2 days and was told, ‘The growth on your bladder is cancerous and ready to spread.’ It took me many months to put together that, had the baby not been ectopic, we may not be here today. I had the ectopic removal in October of 2013 and the bladder cancer removal in November of 2013. My ectopic pregnancy took my last working tube and therefore, I went straight into IVF in December of 2013.

I look back now and realize I went into distraction mode by going straight into IVF. We started our first cycle in December and had our egg retrieval in January of 2014. We were blessed and got pregnant on our first try! The whole pregnancy was emotional and stressful. I kept waiting for something bad to happen, given my past. We gave birth to Zoey in October of 2014. It was a big change and I went through some really bad postpartum depression. I managed to get it under control by continuing my therapy.

We decided in the summer of 2016, we wanted to try for another baby. We went back and transferred one frozen embryo. We had our 2-week follow up and our hearts broken. The embryo did not take and we lost it. We decided to only do one, as there was a risk for multiples. We talked and decided to transfer two and pray that one would take. We went back in September of 2016 and transferred two more. We did our 2-week wait and came back to see two sacs! We were expecting twins! We came back the third week and they said, ‘There are THREE sacs now!’

Due to the number of babies, we were transferred to a perinatal specialist to monitor our pregnancy. It was around 10 weeks when we were able to be seen, and at this ultrasound, they found a fourth baby! All I could think is, ‘How can you miss a baby?’ Turns out, two babies were SHARING the same sac! Any multiples pregnancy is a high risk, but having quadruplets where two babies share the same sac created an even higher risk.

Once we were at viability, we opted for a hospital stay until the babies were born. This meant I was going to be away from Zoey and she would have to come to visit me on weekends. We lived far from the hospital and it was too much to do during the week when dad worked, so she went to daycare. I would video chat in the morning and at night with her so she could still see me.

Every day, we had an ultrasound to make sure the babies were safe and growing. Our provider decided to do daily BBP on babies A and B, and as long as they behaved and babies C and D were growing, we were fine. If the two sharing the same sac had failed back to back, that was grounds for an emergency C-section.

We made it all the way to 31 weeks and 6 days, just a day short of our 32-week goal, thanks to preeclampsia. All were born within a minute of each other and weighed over 3 pounds!

The girls were on oxygen for 24 hours and went straight to room oxygen. Our son needed a little more help and was on the c-pap machine, high-pressure oxygen, regular oxygen, and finally, room oxygen. They spent 5 and a half to 6 weeks in the NICU, and then came home.

Madelyn was the first to come home, then Ava and Olivia followed a day later. Our son kept failing his car seat test and didn’t get to come home until 2 days later. We were fortunate enough to have help with our night feedings so we could get some rest. They were on 3-hour feeds and from start to finish, you only had 1 and a half hours till the next feed. We would go through over 200 diapers in a week!

Now we have soon to be 3-year-olds who love to jump and run around. They also love to climb. Of course, it wouldn’t be sibling love unless they fought with each other, too.

Big Sister Zoey is great! She calls them her ‘babies’ and wants to help with everything . Both Dad and I still work full-time and we have our routine down. He will get all five kids up and ready for daycare while I leave to get to work. I get off earlier and head home to start dinner for when they get out of daycare.

There are days during the week where we have about an hour or so of ‘free time’ to get ready for the next day or just veg out and do nothing. As you can imagine, we usually choose the do-nothing part.”

This story was submitted to Love What Matters by Virginia Johnson. You can follow their journey on Instagram. Do you have a similar experience? We’d like to hear your important journey. Submit your own story here. Be sure to subscribe to our free email newsletter for our best stories, and YouTube for our best videos.

‘Something weird was happening to my body. My abdomen started to swell. I appeared 7 months pregnant. The second we left the clinic, fear invaded us.’ Mom births quadruplets, claims she wouldn’t ‘change it for anything in the world’

Help us show there is a community of support. SHARE this story on Facebook with your family and friends.