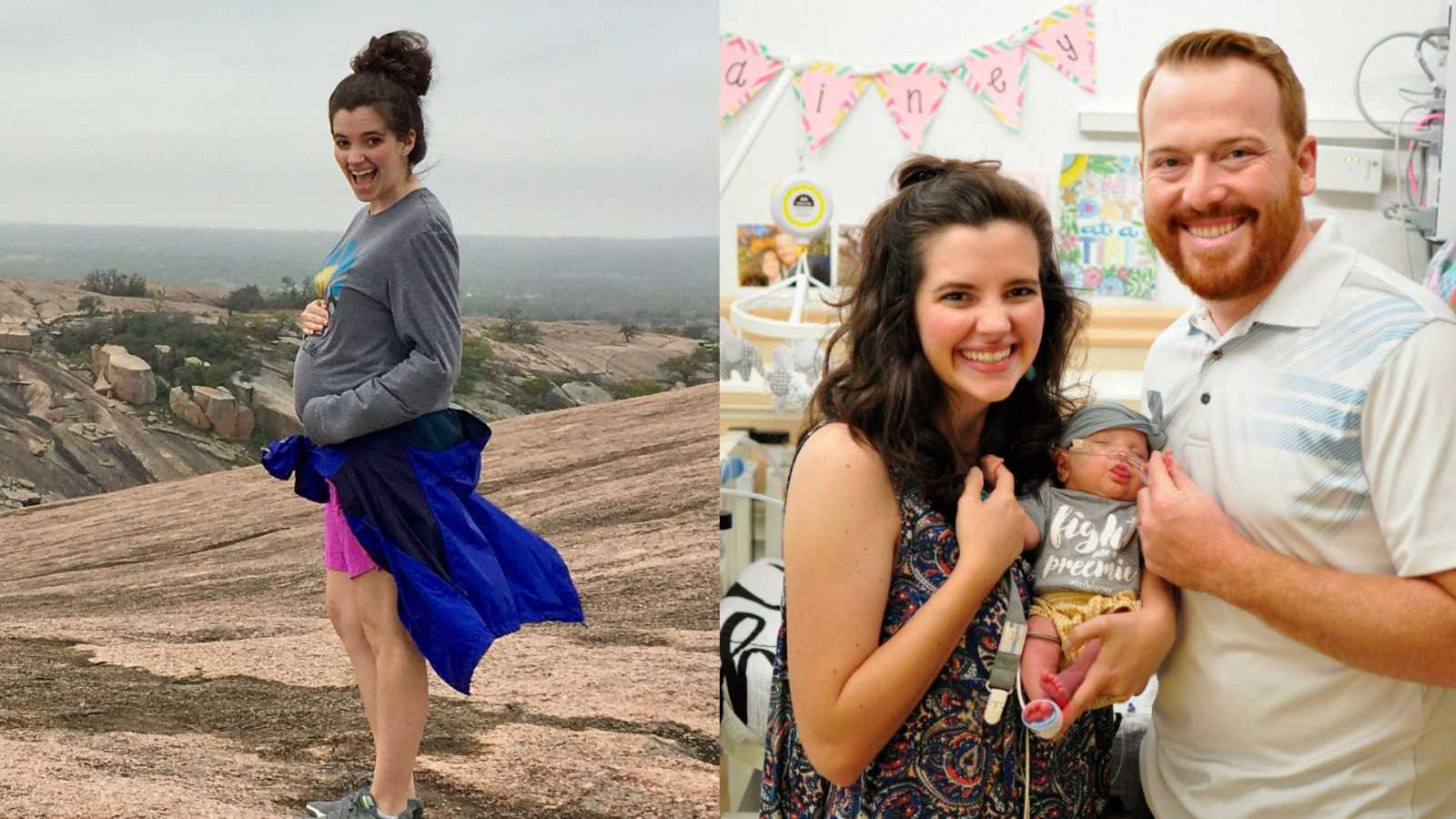 “I always wanted to be a mom and just expected it would come easily. Fast-forward to 2015 when my husband, Bryan, and I started trying to get pregnant. I was only 23 at the time and healthy and you hear all those horror stories about how it ‘only takes one time!’ Well, a few months later we were in fact pregnant! I was so excited I cried at the doctor’s office.

A few days later I was crying for a different reason. I started bleeding and my progesterone numbers were very low. The doctor soon confirmed my worst fear – I was miscarrying. I was devastated. It is so hard to describe how it feels. I was grieving the loss of a child but also the loss of what I expected – the big pregnant belly, the pregnancy announcement, the baby shower, having a newborn at home, and so on. There were nights I would just lay on the floor and cry because I didn’t know what else to do and Bryan didn’t really know how to comfort me. I felt like my body had failed.

It took us almost 9 months to get pregnant again using a fertility drug called Clomid (by this time it had been about a year of trying). I was so excited but also now understood that this baby wasn’t guaranteed to us. A few weeks later, during a family vacation at the beach, I woke up in the middle of the night in excruciating pain. I couldn’t stand up straight and immediately went to the ER. While we were there they couldn’t find the baby and told us we had had a missed miscarriage. Sure enough, I started bleeding a few days later. Again, I was left with the feeling that my body had failed me.

Thankfully after the second miscarriage, my OB referred me to a fertility specialist. We went through all of the testing and everything came back normal. I was so frustrated, I wasn’t sure if that was a good or bad thing. Our doctor told us we were going to, ‘throw some darts at the dartboard and hope one sticks.’ So we started with an IUI (intrauterine insemination). The first one was unsuccessful and I was angry because this was supposed to be our magic fix. Amazingly, our second IUI was successful and I was able to stay pregnant with the help of additional progesterone supplements.

My pregnancy was amazing. We were so ecstatic to tell our families and friends. At 16 weeks we were able to find out that we were having a little girl – Elaine, and we’d call her Lainey. All of my dreams were coming true!

The night of March 31, 2017, I was lying in bed watching Netflix. I got up to go to the bathroom and I felt a huge gush of water. I was 22 weeks and 5 days pregnant. Bryan wasn’t home so I called my mom and she came over to drive me to the hospital, thinking I was just overreacting. A few hours later the doctor confirmed, my water had broken. This is a condition called PPROM (preterm premature rupture of membranes). I was put on complete horizontal bedrest in the hospital. I did not get out of bed for 9 days. That is when we hit our first milestone – 24 weeks. That morning my temperature kept rising and the doctors determined I had an infection. Lainey had to be delivered, or both of our lives were in danger.

Lainey arrived into the world on April 9, 2017, at 24 weeks gestation, weighing 1lb 4oz. She was roughly the size of a water bottle and had feet the size of Starbursts and hands the size of a Goldfish cracker. She was so tiny, but man was she feisty. We spent 135 days in the NICU where we almost lost her. She had 3 surgeries, too many blood transfusions to count, and we didn’t get to hold her until she was over a month old. We didn’t get through it without the help of our amazing nurses and doctors, friends, and family. Having everyone rally around us was so amazing. Those 4 and a half months were so hard but they completely changed our perspective on life and I wouldn’t change that for the world. We believe that God has a plan for Lainey’s life. It does not look like how we might have chosen, but He will use her for great things.

Lainey is now 2 years old. She’s spunky and fearless. She’s sweet and sassy. She lives life with everything in her. These past two years haven’t been easy. She left the NICU with a feeding tube. We’ve had therapies, medications, procedures, hospital stays, doctors’ appointments, evaluations, you name it. But she’s amazing and resilient and funny. Elaine means bright shining light and she has been that for us and for so many other people. This past spring we welcomed her baby sister, Emilia, and Lainey has become the best big sister. After all of our heartbreak and fear, I am so grateful for both of their lives. Our story is not what we have chosen for ourselves, but looking back, it has shaped who we are today in the best ways.

For those of you going through something similar, find your people. Whether it’s an in-person group of people, friends, and family you can confide in, an online group, or reach out to me! – just find your people and cling to them. It feels like the difficult will never end and it might take a while, but eventually, you will find a rhythm. You will be able to enjoy things again. You will have good days and bad, but you can and will get through it.”

This story was written by Rachel Lewis of Dallas, Texas. You can follow her journey on Instagram here or visit her blog here.  Submit your own story here, and subscribe to our free newsletter for our best stories.

‘We’re doing the surgery to save your wife’s life, not your child’s.’ Those are words no husband ever wants to hear, but that’s exactly what the doctor said to mine.’

‘My husband and I arrived at the hospital to await our baby’s arrival. I had no idea the very bed I was settling in would soon become my death bed.’

‘I heard this noise – a crackling noise coming from my lungs. The moment I realized my lungs sounded like Rice Krispies, my monitor started blaring. I was drowning in my own fluid. Literally.’

Provide hope for other struggling mothers. SHARE this story on Facebook to let them know a community of support is available.