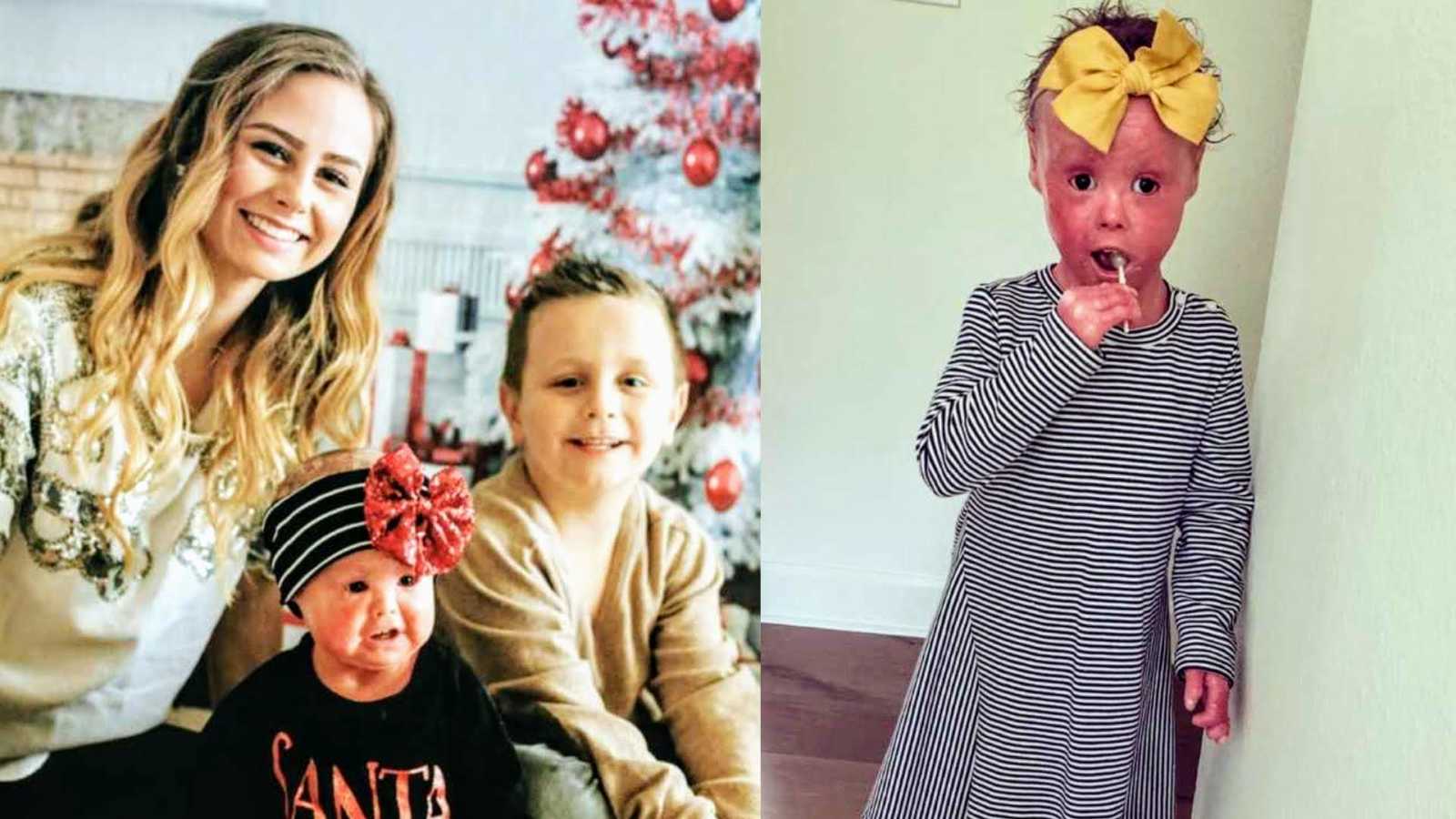 “Every routine pregnancy checkup had gone well. Our baby girl had a strong heartbeat, 10 fingers, 10 toes and a cute button nose. There was never any indication something was wrong. So, when the day finally arrived almost a year ago, and I started feeling contractions, my husband and I rushed to the hospital feeling excited.

Unfortunately, our excitement soon turned into something else: disbelief.

We were thrown into a whirlwind!

‘I’ll forever remember that moment,’ Kevin said. ‘Everything was normal. The doctor told me to get my camera out and take a picture. And then everything just became quiet.’

The world around us stopped, right before chaos erupted.

I did not get to hold my baby girl in my arms. Instead, our baby, Harper, was immediately taken to the neonatal intensive care unit (NICU).

She wasn’t supposed to make it.

Doctors had never seen anything like it. Harper was encased in a hard, thick skin. She was covered in thick plaques, much like armor, all over her body. Her skin was pulled so tightly that her eyelids had flipped inside out and the blood flow to her extremities was being constricted, causing discoloration in her limbs.

Her outlook looked grim, and so doctors had Harper transferred to Seattle Children’s to see a team of specialists.

Harper was diagnosed with Harlequin Ichthyosis (HI), an extremely rare genetic condition that affects the skin. It is estimated to occur in only about 1 in 500,000 babies.

‘This specific defect affects the individual cells of the epidermis; they aren’t able to be held in place,’ said Dr. Deepti Gupta, a dermatologist at Seattle Children’s. ‘It’s like building with bricks, but you’re missing the mortar. She’s missing the glue that holds it all together.’

Due to the rare incidence in cases of HI, there wasn’t a lot of literature aside from anecdotal approaches to help steer the direction for treatment, and so Seattle Children’s specialists from dermatology, plastic surgery, anesthesia and neonatology came together to discuss Harper’s case and to make a plan. ‘I had never seen a case like this in person, and I’ll probably never see one again,’ said Dr. Raymond Tse, a plastic surgeon at Seattle Children’s. ‘My first question was: is this child going to survive? From what we learned about the condition, there’s about a 50% mortality rate, which usually occurs in the first few weeks of life. We knew if we were going to save her, we were going to need to do something quickly.’

The first few weeks of Harper’s life were filled with difficult decisions. Doctors were concerned she was going to lose her fingers or limbs if they didn’t surgically release the skin that was constricting blood flow. In some cases, constriction of extremities can result in autoamputation where the limbs suddenly detach on their own.

‘The literature we found on HI showed survival rates were often poor, but with the use of an oral retinoid and new surgical procedures, patients were surviving,’ said Gupta. ‘We needed to reverse her poor blood flow as soon as possible and use surgical procedures to save her limbs and ultimately improve her quality of life.’

Harper’s thick skin wasn’t cracking at her hands and feet, and so doctors performed a series of surgeries to crack the skin to release the constriction and increase blood flow.

‘We ran into a lot of questions that we didn’t have answers to,’ said Tse. ‘We had to come up with solutions together. I think Harper’s case shows the value in teamwork. There were a lot of people involved in her care. I was a small team player. My part was saving her limbs. It took a much larger team to save her life.’

As soon as the constriction was released, Harper showed dramatic improvement. Her blood flow improved, and doctors were able to save most of her fingers.

When people are faced with certain types of chaos, you have to figure out how to deal with it.  In the beginning, we were just finding ways to cope.

It was like we were sleep walking. We met so many different people, from chaplains to doctors and nurses. You name it and they came by. We had a community of support around us. We needed them all because her condition was so complex.

Harper’s care presented unique challenges for doctors and nurses as she continued to progress. Since her skin was so fragile, even simple tasks like keeping her hydrated, changing her diaper or feeding her a bottle presented challenges. Many of the usual nursing techniques couldn’t be utilized on her, and so the neonatal intensive care nurses found creative solutions to every problem that arose. For two months, Harper stayed in-patient in Seattle Children’s NICU, under the watchful eye of a team of nurses and doctors. ‘When we first saw Harper her outlook looked grim,’ said Dr. Craig Jackson, a neonatologist at Seattle Children’s. ‘But we didn’t give up hope. We thought she would make it, and we were willing to go the extra mile for her. The nurses who cared for her every day were key to her survival. We see children who have the rarest conditions and through meticulous management, we help get them better.’

Seattle Children’s was the first hospital in Washington state to have been designated a Level IV NICU, the highest designation possible, equipped to care for the tiniest and most critically ill newborns.

Just before Halloween, we were finally able to bring Harper home for the first time.

Every day we faced a new challenge, but we took it all in stride. Once the plaques of her skin started to come off, you could see our beautiful Harper emerge.

My husband and I liken her skin to that of a snake. Every two or three hours she sheds her skin.

Everywhere she goes, she leaves a little trail behind. She’s unique and special like that.

Harper still makes visits to Seattle Children’s for occupational therapy and physical therapy to help with minor delays she still has with movement, but she’s made tremendous progress. Cognitively she has no delays, and eventually she should be able to catch up with her peers.

‘She started at a harder place than most people, but she has made leaps and bounds,’ said Gupta. ‘There wasn’t anything that could have prepared Harper’s family for this, but they’ve been her rock. She’ll always have red, scaly skin, and will be more prone to skin infections, but there should be no barriers for her.’

Although Harper will always live with HI, we are hopeful about her future. Looking back at her first year of life, it’s hard to believe how far we’ve come.

We want her to be just like any other kid. Society today places a lot on looks. We’re hoping she can overcome some negative stereotypes and thrive. She’s already overcome so much. We didn’t think she’d survive, and now she’s celebrating her third birthday. She’s our miracle!”

This story was submitted to Love What Matters by Angie Foy of Edmonds, Washington. You can follow her journey on Instagram here. Do you have a similar experience? Submit your own story here, and be sure to subscribe to our free email newsletter for our best stories.

‘Every time we’re out and a stranger compliments on how big and beautiful her eyes are, I have a mental debate on whether or not I should mention her defect.’

‘I thought to myself, ‘This is crazy!’ My heart sank as the doctors rushed into the room. We were going to have ‘the talk’. I could tell by the look in their eyes.’