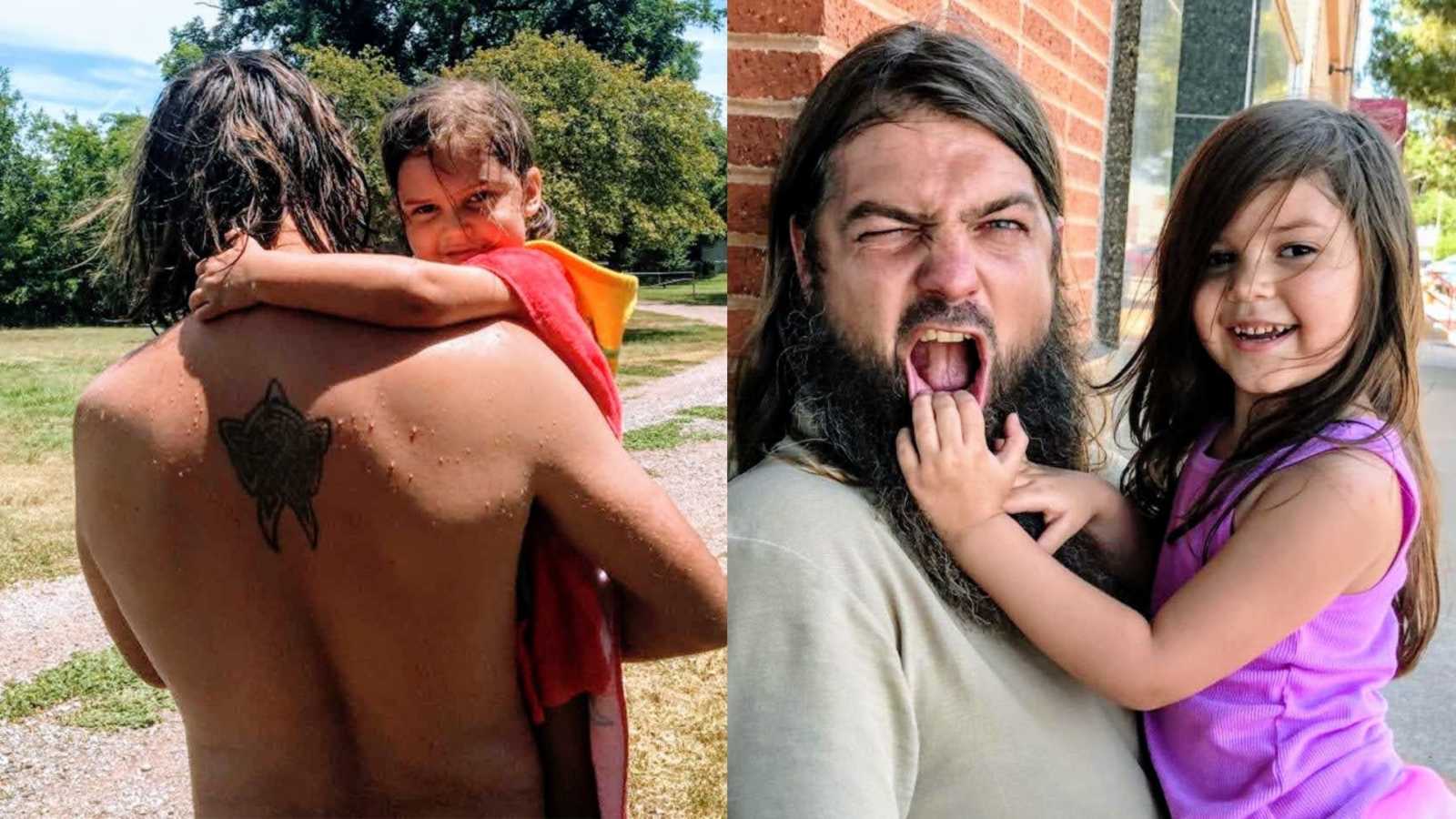 “The other day, someone commented to Gaea, my six-year-old daughter, about how cool it was she had two dads. She wrinkled up her nose and shook her head, sticking her tongue out at me. To those who don’t know our family, you would think she did not consider my husband to be a father figure to her. But it is actually quite the opposite.

Gaea’s dad and I split right before her second birthday. From the beginning, our relationship was abusive and unhealthy. He loved her tremendously, but took out all of his anger and frustration on me.

John and I had been introduced by Gaea’s dad years prior. We became fast friends. We had a similar sense of humor and both had a love for books, history, and movies. We enjoyed any time spent together, though we were strictly platonic at this point. He even came to Gaea’s first birthday party.

As my relationship with her dad ended, John was there. We were automatically comfortable around each other. We spent hours and hours talking about anything and everything. Within a year, we were serious. I reintroduced Gaea to John when she was nearly three. She was uneasy and shy at first, but he was very sweet to her and let her take her time to warm up to him. The more they spent time together, the more easygoing and joyful she was with him.

Due to unforeseen circumstances, I suddenly found myself without childcare one day a week. John graciously stepped in, arranging to stay home from work to hang out with her. Their bond grew and they truly looked forward to their special time together.

During this time, we witnessed her form her own opinions of him. We had long suspected Gaea’s dad had been telling her John was not nice, or to not trust him, and she would act as such at times—standoffish and even cold. But this shell broke easily and she eventually let an ‘I love you’ slip in the middle of a tickle fight. We considered this a big step. After, she was completely head over heels for him.

The two of them became a dynamic duo, leaving me behind at times to do their own thing. They went to their favorite fast food places together, or went to the grocery store. She helped him work outside. He was part cool best friend, part father figure, and part constant protector, coming to her aid for any scrape, bruise, or mean words overheard on the playground. He even taught her to swim.

When we got married, Gaea was four. She rocked her role as flower girl, and made our wedding guests gush and giggle as she finished dropping her flower petals at the end of the aisle and held up her basket to him, exclaiming, ‘Look, John! I did it!’

When we became husband and wife, John and I enjoyed using those terms for each other, but stepdad and stepdaughter were never in our vocabulary. And we certainly didn’t think of Gaea as having a new dad or another dad. We were still the same crew. We just had rings on our fingers now.

A little over a year later, her brother was born. Not her half-brother. Her brother. As you can tell, labels have never been important to us. What was important was how we all changed to include this tiny being in our lives. John had a son, and my Gaea had a baby brother.

The pandemic hit when he was not even a year old, and everyone’s lives changed. Gaea started virtual learning at home. It took some time to find our rhythm and get used to not venturing out into the world as much, but we did it. And we still do, as the situation continues.

We recently implemented times where Gaea is allowed to stay up late, after her brother goes to bed. In a non-pandemic world, we would have had excursions to movies and the coffee shop without little brother in tow, but we have had to change our destination to streaming movies in the living room and hot chocolate in to-go cups.

On our first movie night, where did Gaea sit? Cuddled up next to John, as they both cracked jokes the whole time and giggled nonstop. Friend, dad, protector.

When she was smaller, I remember pointing to a picture of him and asking her who it was. ‘My John,’ she replied, without hesitation.

John is not her dad, her second dad, or her stepdad. John is HER John.”

This story was submitted to Love What Matters by Brenda LeSage of Wichita Falls, Texas. You can follow her journey on Instagram. Do you have a similar experience? We’d like to hear your important journey. Submit your own story here, and be sure to subscribe to our free email newsletter for our best stories, and YouTube for our best videos.

‘He was looking at my new body in full light. ‘Rawr,’ he’d exclaim, flicking his eyebrows up and down.’: Woman embarrassed by postpartum body thankful husband ‘never slowed down in his affections

‘At 2 years old, they called me ‘Mommy.’ No one ever doubted I was their REAL mother. I wasn’t ready for them to know the truth.’: Mom of blended family says ‘at the end of the day, love is what matters’

‘Are they ALL yours?’ What do I say? ‘Yes, these 4 are mine, but those 3 aren’t.’ Being a step-parent is THE thankless job.’: Mom discusses ups and downs of being a blended family