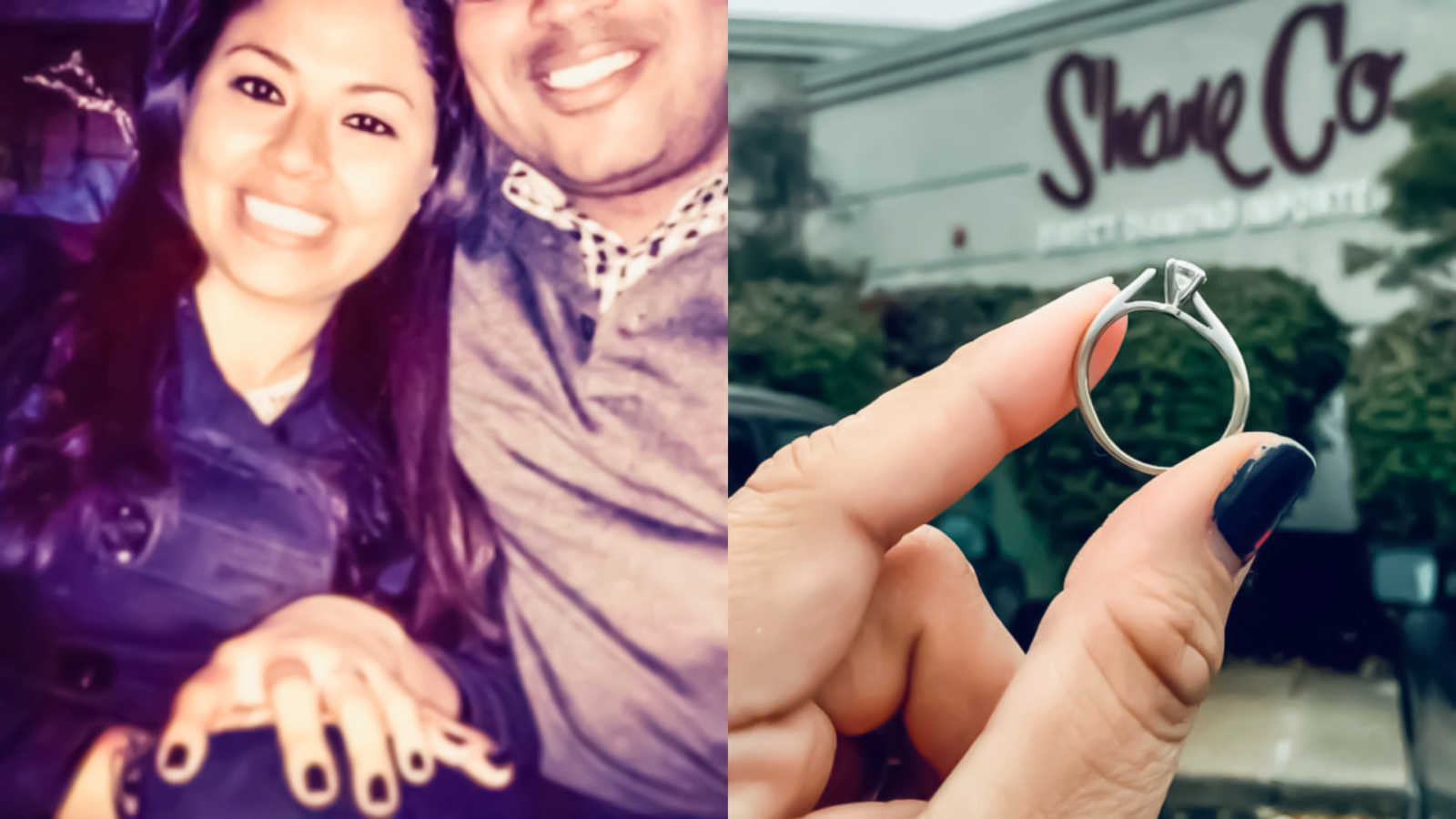 “Every time I look down and see my engagement ring, I smile. I think of everything Devon did to get it, the time spent designing it, and getting my finger size right. Imagine my horror when one day I went to run an errand and after some time I ran my thumb through my ring finger and froze. The. Ring. Was. Gone.

Let’s backtrack for a bit. I remembered I took it off prior to entering the house, and put it where no ring belongs. In my bra. That’s right guys, the ring my then-fiancé had worked so hard to make was stuffed in my bra for safekeeping.

While at Publix, I bought an insane amount of groceries (that should tell you how long I was there), and once I was getting ready to pay I realized my ring was missing. I searched in the car. In my bra. In my bag. It was nowhere to be found. I drove off to the apartment, hoping it was there. But it wasn’t.

As I drove back to Publix, I remembered when I had initially arrived I heard something fall, but paid it no attention. So, I parked and started searching.

I was looking straight-up crazy. It was around 8 p.m. when I found myself crying and crawling, mostly crying, on my hands and knees in the middle of a Publix parking lot. I got in the car to move it and aim the lights at a different angle when I saw something shiny catch my eye. I walked toward the shiny object. And there it was, right next to a car tire. It had been laying there for a few hours.

I like to compare this moment to a scene in ‘Lord of the Rings,’ where Sméagol got his hands on that ring. That was me! I was squatting down while saying ‘my precious’ as I pointed it towards the light to see it better.

As I put myself back together, I realized the ring was bent. Either I ran over or another car did. I need to admit here, I imagined the ring traveling the streets of Miami stuck on a tire thread. Never in a million years would I have thought it would survive such an event.

So, after this whole ordeal, I called my fiancé (during all of our relationship we’ve lived in two different states, him in Indianapolis, me in Miami), and I told him everything that happened. Left out the part where I found it. I wanted to hear what he had to say. He’s always been cool as a cucumber.

See, I left out a fun fact—he sold not just one thing, but several things that meant a lot, to make this ring happen. I thought he would react differently. But all he really had to say was, ‘It’s okay!’ His voice didn’t change, nor did he sound annoyed. That right there said a million and one things to me. To this day, we’ve been married six years and he’s still this cool, calm and collected guy.

He took the ring back with him to get it fixed during one of his visits, and I got it back a week prior to our wedding. A few weeks ago, the ring suffered another tragic event!

This time I have no idea how it happened. All I know is from one day to the other it was fitting very snug and uncomfortable, and I noticed it was bent. The next day I ran off to the jewelry store and I had them fix it…again! The process was fairly easy and I had my ring back in a few days.

And I got the same reaction from him, as he calmly said, ‘We got it fixed once, they can do it again!’ If I am ever able to pass this ring off to my son as a family heirloom, it’s going to come with one heck of a story (or two or more).“

This story was submitted to Love What Matters by Maria Middleton. Submit your own story here, and be sure to subscribe to our free email newsletter for our best stories, and YouTube for our best videos.

‘The other day I thought, ‘I miss hanging with my girls,’ while scrolling through photos. A light bulb went off.’: Woman’s hilarious solution after virus ruins ‘much needed girlfriend time’

‘The photographer asked, ‘Would you like to retake the photo without the tooth sticking out?’ She replied, ‘Nope, I’m good!’ She doesn’t conform to societal standards.’: Mom admires ‘strong-willed’ daughter after hilarious school photos