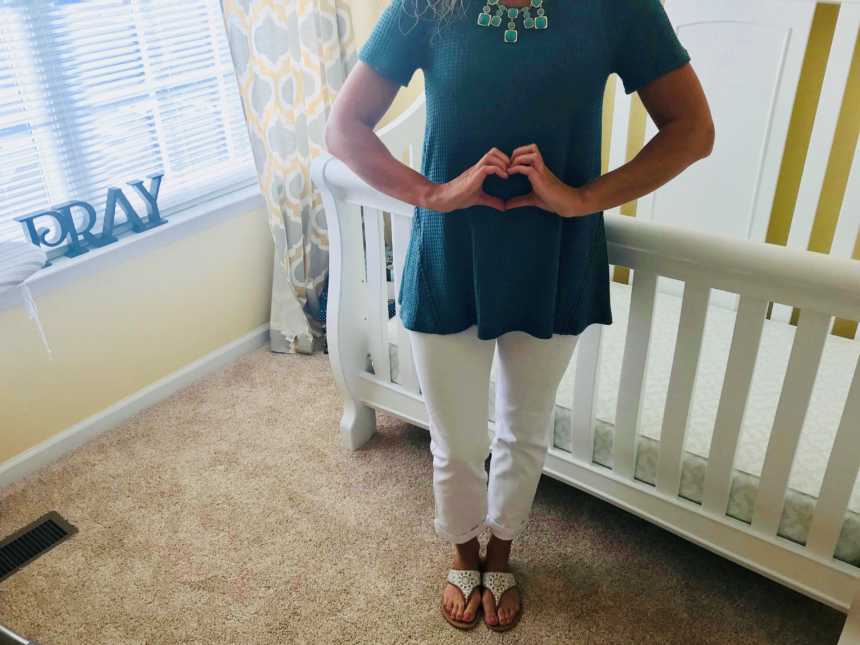 “After I delivered Cayden stillborn at 25 weeks, we were blessed to be unexpectedly expecting again nearly five months later. For several personal and emotional reasons, I wanted to switch my OB/GYN care provider for this pregnancy. I viewed it as a clean slate with new surroundings and a different perspective on my medical history. Little did I know that not only would I find out I was potentially miscarrying this pregnancy, but that I have a heart-shaped uterus. ‘A what?!’ Exactly.

As I lied on the table while the ultrasound tech stared at the screen, fervently typing and clicking, it was silent again. She flipped the monitor to our sightlines and pointed to a growing pregnancy sac. But she also pointed to the empty space, where the embryo should be. We were assured it was still very early in the pregnancy, so we would come back for more ultrasounds in the future to monitor for growth. She then asked, ‘Did you know you have a heart-shaped uterus?’ I laughed, thinking she was trying to make light of the current situation. ‘Um, no? What does that mean? Heart-shaped uterus sounds cute.’ She continued, ‘It’s called a bicornuate uterus and it’s shaped like a heart, basically separated with two horns, instead of being shaped like a pear.’ ‘The doctor will talk to you about potential risks and concerns associated with a bicornuate uterus or uterine septum.’ ‘Well that’s a new one,’ I thought to myself.

‘Why the last 365 days after delivering my son silently sleeping were the worst and best days of my life.’

Upon meeting with our doctor, we learned that a heart-shaped (or bicornuate) uterus can bring several risk factors along with it during pregnancy. (And please, whether you have one or not, do not take what I am sharing literally or as medical advice, since this is specific to our case and is an effort to shed light on this topic.) My uterus is essentially partially split down the middle, which is considered a defect that happened while I was inside my mother’s womb. And no, my mom didn’t do anything to cause it either, it’s just something that can happen during the miracle of a baby developing. With this inconvenient septum-like divider intruding my uterus, it transforms what is supposed to be a large, roomy pear home for my babies into a heart with two horns, potentially minimizing space for full-term growth. So, it is possible that I won’t go full-term in my pregnancies, my baby may have low birth weight, potential deformities, and increased risk of miscarriages, all because of this stinking heart. How…loving?

I went home that day confused, upset and anxious. Why didn’t I know about this during my pregnancy with Cayden? Did my uterus cause my son to run out of room or trap the placenta? If we had known, I would have been considered a high-risk pregnancy, and maybe we could have saved him? I did what most of us do but know we shouldn’t. I Googled ‘heart-shaped uterus’ and its risk factors. What I found on the internet gave me a panic attack in the middle of the night. One article in particular made my nerves hit the roof because of the statistics it offers, such as ‘those with a bicornuate uterus have a 60% chance of delivering a living child.’ I screamed and cried uncontrollably, telling my husband that I cannot carry and deliver a living baby because of this thing! Everything went red, as it does when you’re on health websites at 2 a.m., until my husband grabbed me and fired back, ‘But God can!’

I ended up miscarrying that second pregnancy. But that’s not how I want this story to end. I want fellow mom-to-be’s who might find out they have a heart-shaped-uterus like I do to find this article instead of the scary statistics that are out there on the Internet. In fact, I’ve reached out to that website to provide credible resources and studies in support of their numbers. But at the end of the day, the truth is God gave us heart-shaped uterus’ and there is nothing we can do to change that, unless you opt-in for surgery of course. I’ve lost two pregnancies, one in which I never saw a heartbeat and the other, where I held my lifeless son in my arms. Just when I thought my own heart couldn’t take anymore, an ultrasound technician tells me I have a heart-shaped uterus. Touché, Lord.

Is it scary? Yes. Is it different? Definitely. But God has the power to give you one of His children to raise and love. I wish I could attest to this from experience, but all I’ve got right now are barren women stories from the Bible followed by promises kept, and women who have reached out to me along my journey with heart-shapes of their own who’ve birthed beautiful children to kiss goodnight. And what do they all have in common? They found strength in their faith, used the longing for a child of their own to keep going, and the will to keep trying despite their broken or defected pieces. My medical file and hopeful pregnancies will always be labeled and treated as high risk because of my bicornuate uterus. But I will spend my time striving for motherhood in a low-risk state of thought as best I can when that day comes again. Praying for wisdom and guidance for the medical teams that are on my case, for the Lord to send His Angel Armies to protect my growing baby, and for an abounding strength and faithfulness in God’s plan no matter the outcome.

Just like I am forever a part of the pregnancy loss club of powerful mamas, I’ve earned myself another badge in a club full of heart-shaped ladies. If you’re scared like I was (and still have some doubting moments here and there) start telling people about your journey. I bet you will find a fellow heart-toting womb in your circles who you can confide in. I’ve heard of women not having any issues with their heart-shapes, so much so that they didn’t even know they had it until going through menopause! Another fun stage of female-dom of course.

So, take heart…literally and figuratively, in your God-given anatomy. After all, it was made to not only make and carry children, but to love them most all. And that means whether you bring them into this world through your uterus, through adoption, a surrogate or animal rescue center.

Besides, I don’t know about you, but I never did like pears anyway.”

This story was submitted to Love What Matters by Kailey Clymer, 29, of Pennsylvania. Submit your own story here, and subscribe to our best stories in our free newsletter here.