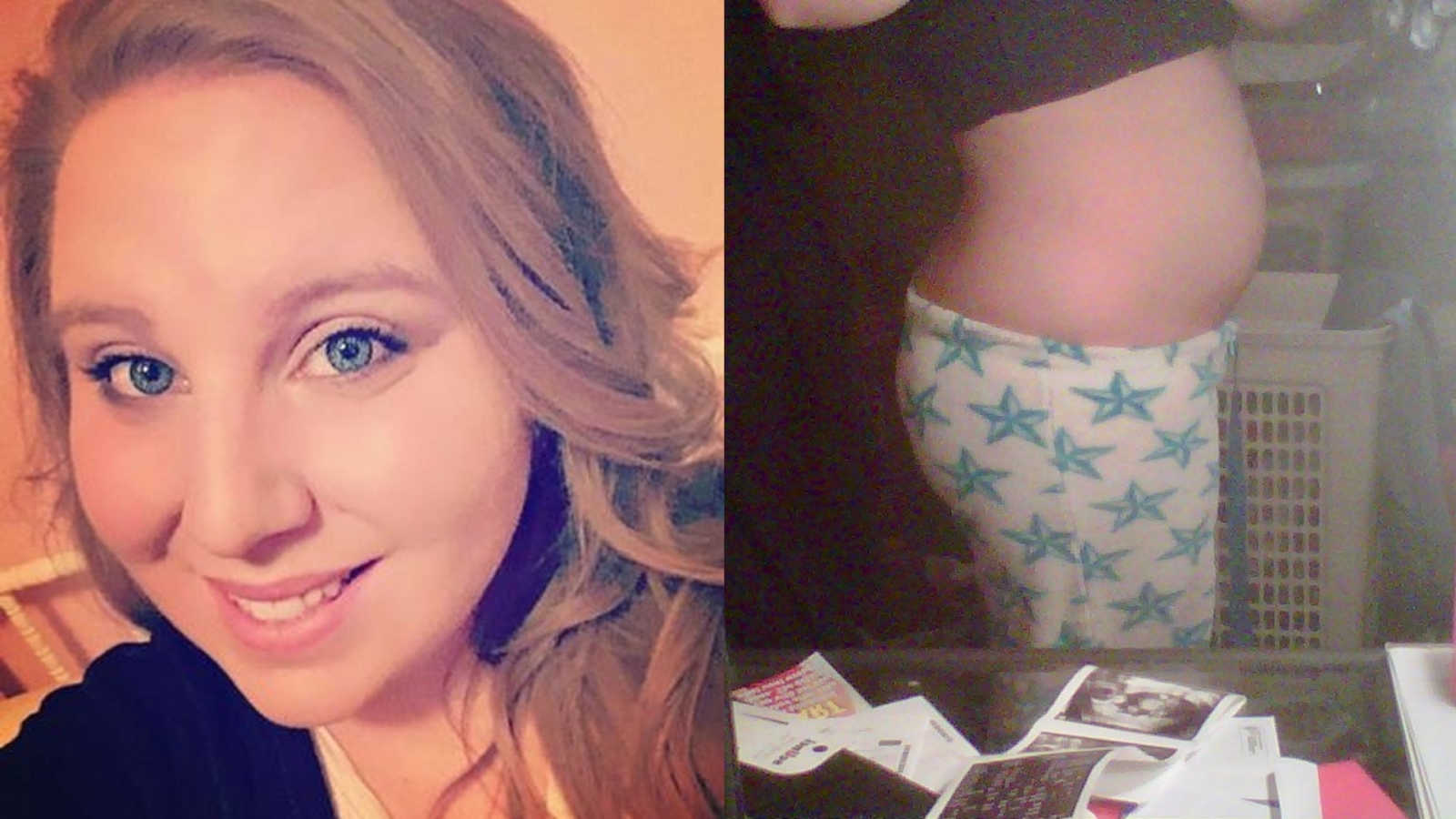 The first time I took a pregnancy test, I was living in an apartment with 4 friends. We were young, wild, and living our best life. I sat in my bathroom staring at a digital pregnancy test. A little hourglass flashed on the screen indicating the test was working and would soon display either ‘pregnant’ or ‘not pregnant.’ My face was flush and my heart raced with anticipation. ‘Pregnant’ – there it was. I wasn’t ready. I was too young, I was having too much fun. I had always wanted to be a mom, but not yet! Not like this.

As the shock wore off and I began to tell those closest to me about my pregnancy, my excitement grew. My boyfriend was over the moon excited to become a dad. His parents and mine did not want to kill us, they were actually excited about a new grand-baby on the way. This was both surprising and exciting. A baby. My baby. Wow!

I immediately started researching and learning about early pregnancy. Joining online pregnancy forums (this was 2008, before Facebook groups were a thing – we had BabyGaga). I wanted to learn everything I could about this baby growing inside of me. How big is it? What can I look forward to as it grows? I did everything in my power to protect the life I was now growing. I took my prenatal vitamins, made sure to drink enough water and get enough sleep. I was so excited to see my baby at my first ultrasound. I studied other women’s ultrasound pictures to learn what to look for. I felt butterflies, big fluttering butterflies, as I laid back on the table in my OBGYN’s office. I stared intently at the ultrasound screen next to me, hoping I would recognize what I would see from the pictures I had been studying. There was a sac on the screen confirming, once again, I was pregnant. The doctor pointed to a small circle inside the sac, the ‘yolk sac.’ This is what gives the baby nutrients in early development. There was no baby yet, likely too early to see on an ultrasound. I would come back in two weeks and by then, we should be able to see the baby and hear its precious heartbeat.

My next ultrasound came, this was it, I was going to see my baby for the first time. Again, I stared intently at the ultrasound screen. The doctor was so quiet. This was the first moment I felt something was wrong. Still no baby, still no heartbeat. I had 2 additional ultrasounds spaced two weeks apart, hoping each time to hear that heartbeat. Giving myself hope every visit, that this would be the one. I never gave up hope until my final ultrasound… I would never hear that heartbeat. I should have been 11 weeks along at that point. All hope was gone. My doctor called it a ‘blighted ovum.’ Something was likely chromosomally wrong with the fertilized egg that should have grown into my baby. He said this happens to many, many women. I clung to his words, ‘it’s not your fault, there’s nothing you could have done to cause or prevent this.’ I needed to know that, because all I could do was blame myself. That blame nearly broke me.

I had to schedule an outpatient surgery to remove the pregnancy from my body. I lost the baby I never had. It felt like a piece of my heart had been removed during that surgery. I felt incomplete. I was supposed to become a mom. I was pregnant. How could I not be having a baby after I became so excited about it? After I have already told most everyone I know that I’m having a baby? I had all of these plans and dreams for this baby. But all I was left with was grief and pain. I was grieving a life that never was.

In the following years, I wanted a baby more than anything. I was supposed to be a mom. I felt it in my soul. I learned I was pregnant two more times. Both of those times I would find out, once again, I was pregnant with babies who would never be. After my third miscarriage, I felt completely and utterly broken. I had blood tests done, many blood tests, in an attempt to identify a reason or cause for these recurrent losses. All results came back ‘normal.’ I had no explanations, no answers, no causes. Just loss after loss after loss. I was angry. I was bitter. I hated that other women carried their babies to full-term what seemed like so effortlessly, but I couldn’t even carry mine past the first trimester. It wasn’t fair. I lost all hope of ever carrying my own baby inside my body. I could not put myself through this one more time. I was broken. I was devastated. How could I get pregnant so easily, but never have my babies grow? I felt I had the cruelest form of infertility. One that gave me hope,  just to slap me with grief. I had to let go of my dreams of motherhood for now, to spare myself the pain of another loss. I decided to live my life to the fullest, create new dreams and new plans that didn’t revolve around becoming a parent just yet.

Two years after my third miscarriage, I learned I was once again pregnant. This was unexpected. My fiancé and I had been attempting to prevent this… I seemed to get pregnant easily, therefore we were using multiple forms of birth control. From the moment we found out I was pregnant for the fourth time, I knew this one was different. I was getting sick daily, something I hadn’t experienced before. I could just feel this baby was actually growing.

On February 2nd, 2011, I saw my baby’s heartbeat for the first time. I had been on that table staring at that screen so many times before. I let out an audible breath when that flicker first showed on the screen. I saw it immediately, before my doctor even pointed it out. Tears streamed down my face. It was singularly the most beautiful thing I had ever seen. I waited years for this moment. Endured so much pain on this very table for this exact moment. The worry did not end there, however. I knew, first hand, just how fragile pregnancy could be. Every day that passed I breathed a little easier that I would finally meet the baby growing inside me.

On September 12th, 2011, after 20 hours of labor, my baby was in distress, he needed to come out right then. No time to wait. ‘His heart rate keeps dropping with every push, I cannot let this keep happening, stop pushing!,’ my doctor said with urgency as he rushed me into an operating room for an emergency c-section. My fiancé got dressed in the OR scrubs daddy’s don for c-sections, in case I would not have to be sedated. The epidural I was given hours ago never worked, I was feeling every intense pain throughout my labor. There was not enough room in the tiny OR for the extra staff required for sedation and an additional body. Unfortunately, I did have to be sedated. My fiancé would not be present while I was unconscious for the birth of our first child. Terrified and devastated, this was not how I pictured giving birth would be. When I awoke, the nurses were telling me about my baby.

Despite his traumatic entrance into the world, he was so healthy. They wheeled me into a room and handed me my son for the first time. As I stared at his adorable face, I felt like the luckiest woman in the entire world. I was holding my son. He was healthy. He was perfect. For the first time in my entire life, my expectations about what a moment would be like, were absolutely exceeded. I did not want to stop looking at him, I wanted to memorize every line of his beautiful face. I was finally a mom. I would never take a single moment of his life for granted. I had wanted him for years, before he even existed. I was determined to give him every ounce of love I had and the best life I possibly could. Our rainbow after the storm had arrived. His name was Jonathan Jr., and he was absolutely worth the wait and heartache.”

This story was submitted to Love What Matters by Rachel Camp of Council Bluffs, Iowa. Submit your own story here, and subscribe to our best stories in our free newsletter here.

Read about Rachel’s son’s struggles with neuroblastoma, and her daughter’s stroke:

‘I place my son on the table. I’m concerned about the size of his belly. ‘Does it look too big?’ I see the fear on her face. My heart drops.’

‘She only used her right hand. She kept her left arm close to her, tightly clenched into a little fist. Deep down I knew what her diagnosis would be.’

Provide hope for other struggling parents. SHARE this story on Facebook to let them know a community of support is available.