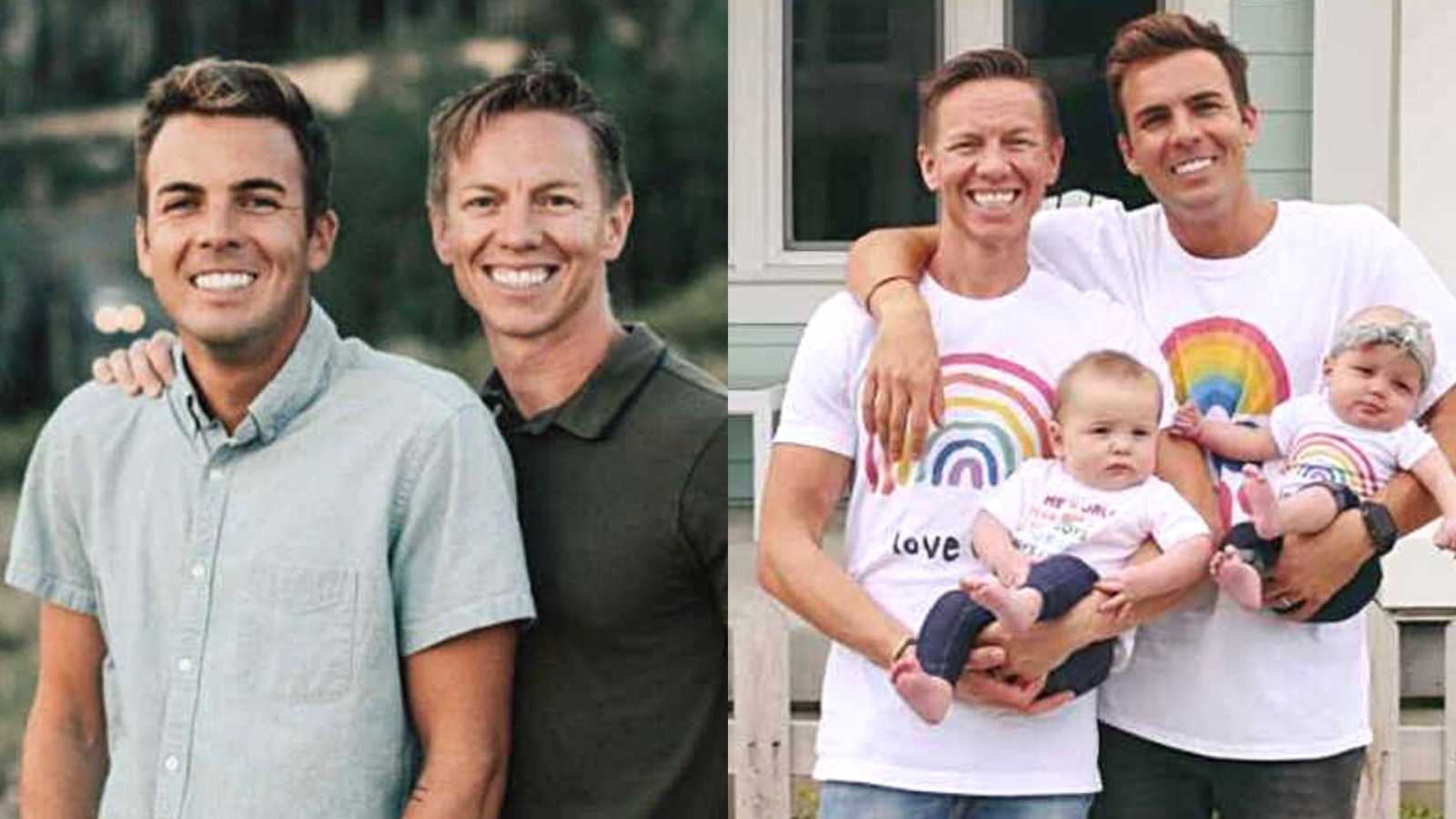 “Growing up, we both always knew we wanted to be dads and have a family. One of the things that really drew us together was our desire to have a family and be dads. We used our early 20s to enjoy our independence. We traveled the world and enjoyed numerous unique experiences. One day, we decided to get serious about starting our family. We realized that obviously we were missing some necessary pieces, and our journey to creating our family was going to be different than most. We knew about adoption, and we were familiar with the concept for surrogacy, but we weren’t sure of all the specifics. Like any good millennial, we dove in and did the Google research. But a little innocent research quickly sent us down a rabbit hole.

Ready or not, we knew we wanted a baby to hold and love. And as a gay couple, our journey to fatherhood wasn’t going be an easy one. We both always dreamed of being parents, although our circumstances make it a little more scientific. We strongly considered adoption, but we had a strong urge to father biological children. For us, that would mean an egg donor, IVF, and surrogacy. Which also meant a whole lot of time, paperwork, and fees in between. Being from a conservative state with a predominantly Mormon population, we were not surprised to find we’d have to jump through more hurdles than if we lived elsewhere.

Finding a surrogate proved to be a slow process. Time after time we were turned down by potential surrogates due to our sexual orientation. Around this same time, we learned a member of the Utah legislature was trying to change surrogacy laws to exclude same-sex couples. Simply put, because we were gay, we were not entitled to the same rights as a traditional couple. We knew part of the law stated we had to be married, which we were planning to do, but quickly realized we had no time to waste. Pushing plans for a spring wedding to the side, we hurried to the courthouse where we got married in front of just a handful of people and by a judge we’d never met—only our moms and Jeffrey’s sisters were able to attend. It certainly wasn’t the dream wedding we had envisioned, but by this point, becoming parents mattered more than anything.

With so much patience and perseverance, we finally found a perfect candidate to carry our child. After being turned down by over 35 different surrogates, we connected with a single mom who was ready to make the ultimate sacrifice to help give us the gift of being parents. It turns out, the beginning of the surrogacy process for a gestational carrier is often unpredictable. Medically preparing a woman’s uterus for successfully growing a child is not an easy task. Already having formed a special bond with our surrogate, we were devastated when told her likelihood of being able to become pregnant through an embryo transfer was extremely low. It was time to seek out a new surrogate, and we were back at square one. After continued searching, we finally met Julie.

When we first met over lunch with her husband, we felt an instant connection. We hit it off and we sailed through all the preliminary steps and started the steps (medications) to prepare Julie. Sadly, we discovered she was having similar problems to our first gestational carrier. We were starting to feel cursed. History seemed to be repeating itself when the doctor told us there was only a small chance this cycle would be successful. We figured a chance is a chance, and two perfect embryos were implanted in Julie’s uterus, Bryce biologically connected to one and Jeffrey to the other. Then, it was time to wait. After boxes of pregnancy tests and some confirmation through bloodwork, we were pregnant! The transfer was a success! At the time, we didn’t know if one or both embryos ‘took.’

It was weeks of waiting until heartbeats were able to be detected and we found out we were pregnant with twins! Our pregnancy was fairly uneventful and standard for twins. But right around Julie’s 34-week mark, at about 3 a.m., we got the call of our lives. We immediately headed to the hospital to witness the birth of our children. Like all parents, we were a bundle of emotions and couldn’t believe the day had finally arrived. By this point, we had created an unbreakable bond with our surrogate and regarded her as nothing short of a hero. On this day, she labored and delivered twins through an unmedicated birth. We love Julie and we saw her being a mother to her two children and had no doubt she’d be an incredible surrogate. We really felt like we connected on a deep level.

Truthfully, we went through 2-3 rounds of medication with her trying to get her uterus to thicken enough to transfer. But we loved her so much and felt like she was ‘the one,’ we were willing to keep trying with her. She is a rockstar. Anyone who can do an unmedicated twin birth is Wonder Woman. On November 27, Larue (Rue) and Ridge were born. Rue weighed just over four pounds and Ridge weighed just over six pounds. They were premature and weren’t quite ready to take on the world alone. Our twins spent about two weeks in the NICU learning how to breath and eat on their own. Life is hard with a new baby, not to mention two. For us, it was a weird transition as well. When a woman is pregnant for nine months, I think there’s a certain level of acceptance and ‘nesting’ that occurs. For us, we went from our pretty normal lives to coming up with twins.

We were kinda pregnant for 34 weeks, but not really. We didn’t have to deal with morning sickness and cramps and the struggles of pregnancy—so for us, it was a real shock coming home with two babies! Honestly, it has worn on our marriage. It’s hard. Our marriage has changed, and we’ve had to change and adapt. It’s much harder to do date nights, and at the end of a long day, it’s easy for someone to fall asleep so fast they didn’t get a chance to say, ‘Goodnight. I love you.’ And sleep deprivation is real, and it makes your patience shorter. It makes it easier to snap at your partner. We’ve been learning to deal with this.

The twins are now just over six months old. They are healthy and thriving. They’re learning how to sit up and crawl and really find their voice. We are trying to get into a good routine, for them and for us. We’ve enjoyed using our family’s voice to educate others and to provide hope and inspiration to others. Julie still plays a big role in our lives. She is nothing short of an angel. Julie made so many sacrifices to bring them into the world. She gave us a gift we can never repay.

We’ve been called f*ggots in a Home Depot parking lot. We’ve had horrible and nasty DMs on social media. Most people LOVE to see two gay dads with kids. Our sweet neighbor mentioned the other day how she was so impressed we’d learned ‘motherly instincts’ as fathers. Haha. We were a little offended, but she had good intentions. She meant well. It’s sometimes harder for older generations to get past the thought of a child growing up without a mother—but our kids have two parents who love them dearly and they’re better off for it.

Though Salt Lake City, Utah might sound like an unlikely place to raise children as gay dads, to us it is home—one with a surprisingly strong gay community where we know our family will be loved and supported. As parents, we want what all parents want. For our children to be safe and loved and happy. As gay parents, we realize our kids are going to have different paths. We hope to raise our children with acceptance and compassion and we hope to give them the tools they need to be brave in the face of adversity.

And together help redefine what it means to be a family. Love is love. And that’s all that matters. Being gay isn’t the only defining part of who we are, but it is certainly a piece of our puzzle. We are a family and we love each other. We are dads and husbands, but we are also so much more.”

This story was submitted to Love What Matters by Bryce and Jeffrey. You can follow their journey on Instagram. Submit your own story here, and be sure to subscribe to our free email newsletter for our best stories, and YouTube for our best videos.

‘They let children go to TWO MEN? And she’s BLACK!’ She stood with a pen in one hand and paper in the other.’: Gay dads encounter judgement, ‘See the love, not the people”

‘When we saw the ultrasound, I almost fainted. ‘We need to hire some staff!’ It was an enormous gift.’: Gay dads welcome triplets through surrogacy, ‘We’re surrounded by love’