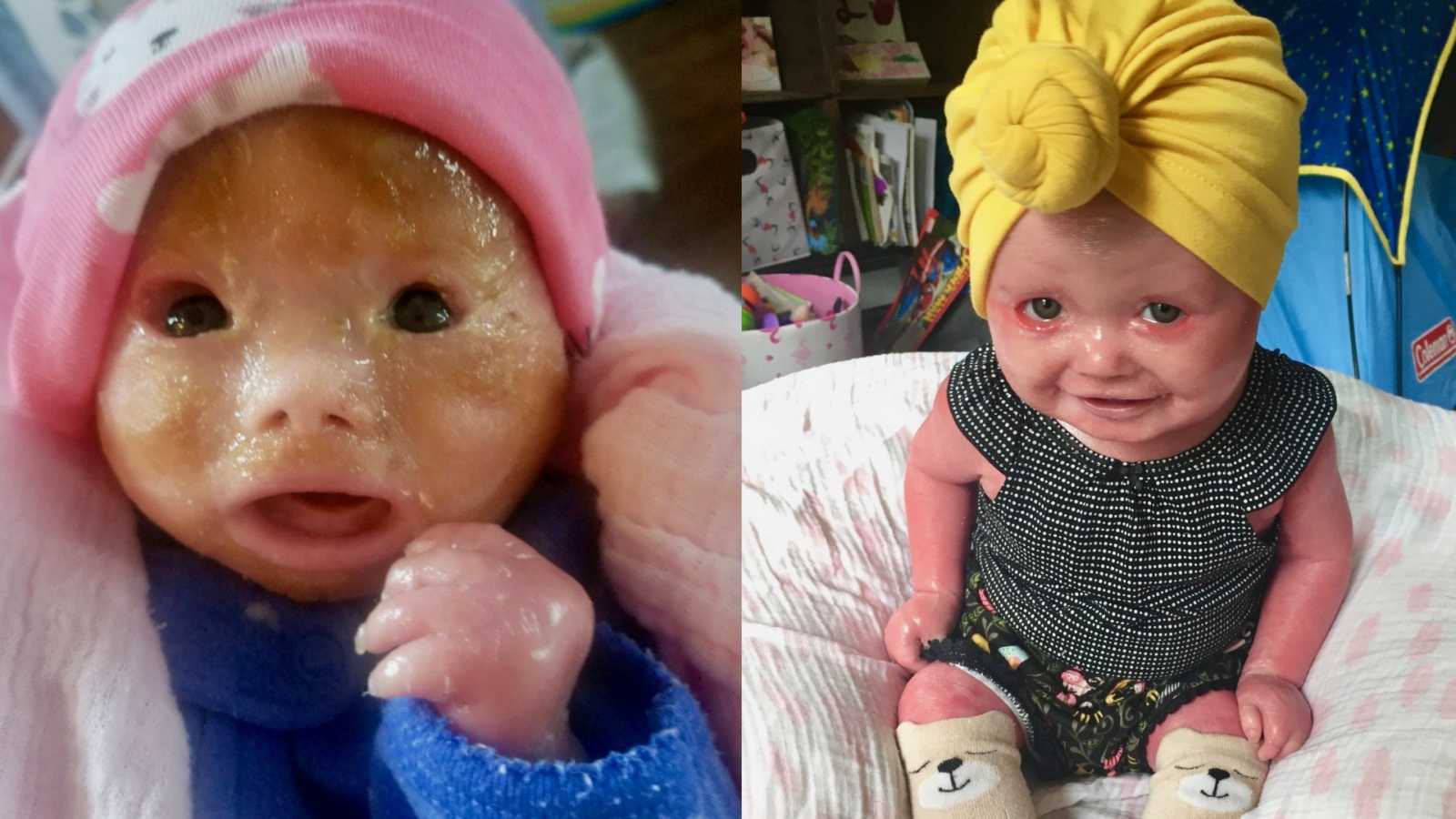 “As I sat alone in a hospital room in shock staring at the wall in front of me, my brain was on repeat. I just kept hearing, ‘What just happened?’ Visions of my daughter, the little girl I had thought about, prayed about, and planned for years for was here, finally. But the moment that was supposed to complete my family, the last piece in the most beautiful puzzle, was suddenly gone–not just like the piece needed to be flipped over gone, but instead, like someone picked up the puzzle and smashed it, gone. Broken and alone, all I could do was stare, and picture her body in my arms.

I had a normal pregnancy up until my water broke at 34 weeks. Still her stats were great, and we had a C-section because she was breach. It was all very calm and wonderful–until it wasn’t. When they took her out, I heard her cry, and they said, ‘She is beautiful.’ Those are the words every mother wants to hear, so I smiled and relaxed. Behind that curtain though, things were becoming very terrifying.

Harlequin Ichthyosis is not something most people, even those in the medical profession, are familiar with. As they tried frantically to help her, her skin hardened within seconds. After hardening, it began to split, causing open wounds all over her body. Behind the curtain I began to sense their frantic, panicked feeling, and I asked if things were ok. They told me yes and asked if I wanted more medicine to calm me; after that, I was out for the rest of what occurred. My husband was brought out and made to choose between larger hospitals and told she had a condition, but it was unknown what. He was handed our Anna and was able to look deep into her eyes just moments before they swelled, and she could not open them again for many days.

I woke up and reached for my husband, and then I was out again. Once again, I woke up and asked where he was, and I was told he was with the baby. As they were taking me to recovery, I asked if the baby was ok, and they responded, ‘We will talk about that in the room.’ I did not ask more; I did not want to know more. I felt as if somehow by wanting a girl so badly I had jinxed myself, and I wasn’t ready to hear bad news. I wasn’t ready for my life to be different. I just wasn’t ready.

First they told me it was a birth defect, and I thought, it’s ok I can fix it. They make prosthetics, they can do surgery for sure in 2017; they can fix it. My husband’s silence scared me; he just sat in shock as the doctor left, and I prodded for more info. He just kept saying, ‘It’s bad.’ What does that even mean? I thought in my head. He told me, ‘Jennie, I looked in her eyes, and she has the most beautiful soul.’

Broken is the only way to describe the feeling as they placed her body in my arms. For months her skin had been growing at an accelerated rate and all at once, upon hitting the outside air, it began to dry. Her fingers were being squeezed and turning blue and her toes were on the bottom of her feet from the skin being so tight. Everyone was frantically trying to diagnose her, but they had never seen anything like this. She was fine; everything was perfect, and then it wasn’t–just like that.

What is so scary about any tragedy or trauma is that it happens just like that. Things are fine (perfect even), and then suddenly they are not. Your decisions in these moments define who you are and what you become. I spent most of the next two days trying not to look up her condition and thinking how she would have zero quality of life if she lived. I allow myself to admit this thought because it was only in that moment, at the most confused and alone time of my life, that I thought maybe she would be better off dead? That question came into my head more than once, and I tried to focus on other things. People came in and out they told me stories of other people with this and how great they were doing. It seemed everyone had looked it up but me because I still wasn’t ready. My husband came to get me from the hospital and bring me to Anna, and as he sat next to me, he told me how the doctor didn’t give her much if any chance of surviving. He thought he could probably keep her alive until I got there to see her. My heart stopped, and I became immediately sick. I had never been more affected by any words I had ever heard in my life. I decided at that moment that my Anna couldn’t and wouldn’t die because, to put it simply, I would never be ready for that. If the feeling I had just experienced were to last for more than a fleeting moment, then I would never recover if she died.

My Anna was a fighter. The NICU was easy, and she did amazingly with everything. Days later, when I saw her eyes for the first time, I remembered what my husband had said. I remember being completely captivated with her and how I never saw what other people saw. She was beauty in the purest form.

It wasn’t until they started trying to get her used to the outside air that I had trouble. The first day I had an outfit picked, and I was so excited, but after only five quick minutes out of the humidity-controlled box, Anna became dry. Her skin became like thick leather, and she cried in pain. The next day, we tried again but this time we covered her in Vaseline. Then we wrapped her in a plastic bag lined with a sanitary cloth. She lasted longer this time, but as I held her, my heart broke. The nurse tried to be positive, but that day, despair consumed me. I gave her back and hurried into the hall where I lost it. I thought she would have to be in plastic forever, and I didn’t understand how she would live. The day we brought her home was terrifying. As we left the hospital, a woman in the elevator tried to look at her. Our nurse was carrying the car seat, and she instantly guarded Anna (but really us) from her reaction.

The following two months were the worst because I felt alone and broken, consumed by despair. My sister, mother, husband, and friends took over, and the only clothes she could wear were fleece pajamas. Every couple of hours I covered her with Vaseline, and bathed her for many hours of the day. I had dreamed for years about the things my baby would wear, and though it seemed so trivial, it was what I struggled with most. As my husband worried more about me, he talked to a friend who had lost two babies, both at a month old. His friend said his wife would talk to me, and at first, I completely rejected the idea.

The day that woman walked into my house was the day that perspective became everything. She told me her long story of two separate pregnancies and how both of her beautiful babies never made it home. Each one died at about a month old and that is exactly how old Anna was when she came home. I thought how hard it must be for her. She could not even walk even into Target without seeing everything her babies would never wear. I thought of the feeling I had when I heard Anna would not live and how this woman must feel that way always, deep inside. I imagined how crippling it must be for her–how she gets up every day and puts a smile on her face for the two boys she has now.

There are a few moments in life that are absolutely life changing. This was one of those moments. I decided to focus on what I could have and not what I couldn’t. I decided that if Anna could wear only fleece, then I would pick the cutest fleece pajamas I could find, and I would match her hat every day. As time went on, Anna’s skin shed the extra layers, and I became more confident in caring for her. My sister and I tried every type of lotion and oil. For her head, I worked for hours to remove the extra skin. Unfortunately, with it came all of her hair. I set small goals, and each time I reached one, I celebrated in a big way.

When you have a child with any type of disability, you find yourself rejoicing in even the smallest moments. I started to realize that if I put restrictions on what she was capable of, then that would become what she would accomplish, so I decided to set the bar high. I decided she was capable of anything, and so was I. I remember the first day she wore jeans–how excited I was to put different fabrics on her skin, how hats turned into headbands, as I was able to get her hair to grow again. Small steps felt like giant leaps, and I made a decision to share Anna with the world.

What my husband saw in her eyes on that first day was instantly what the whole world saw. Anna captured everyone’s hearts because she is the purest form of perfection. Doing the work every day is simple when I’m doing it for her, and with every new accomplishment, the world celebrates with me. Anna teaches me every day to focus on the all of the positives, and the rest just falls into place. I once blamed myself for Anna’s condition. I thought it was the consequence of my greed because I wanted her so badly, even though my world was already perfect. I now understand that I was given her because of the love I already carried in my heart for my daughter. Anna was meant for me, and I for her, and together we will show the world what true beauty is.”

This story was submitted to Love What Matters by Jennie Wilklow of New York. You can follow Anna’s journey on Instagram and Facebook. Do you have a similar experience? We’d like to hear your important journey. Submit your own story here, and be sure to subscribe to our free email newsletter for our best stories.

‘His skin is as fragile as the wings of a butterfly’: Mom’s heartbreaking account of son’s rare skin condition